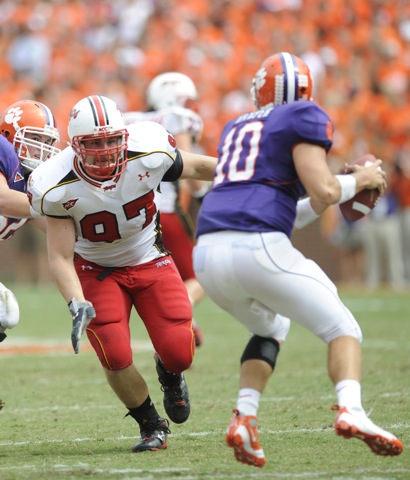 Dean Muhtadi was watching footage of his last game against the Tennessee Titans, holed up in a viewing room at Lambeau Field, when he got the call.

The number that came up on his phone was his teams stock call-out line meaning it could have been just about anything from a coach keeping tabs to a misplaced wallet. But he had an idea what was coming.

His days as a player for the Green Bay Packers were over.

Paring a training camp roster from 80 players to the 53-man limit for the start of the regular season is a unique numbers game and Muhtadi, the former T.C. Williams and University of Maryland defensive lineman, understood his standing in the pecking order pitted him as the long shot for NFL stardom.

Ive got to say for not making the active roster, that was not a surprise, Muhtadi said last Friday. I knew it would be a real, real difficult situation to actually get picked up on the squad. As far as making the practice squad, I was hoping that would be available to me but unfortunately they didnt keep me around for that.

Although he had already been a Green Bay player for nearly four months making his way onto the team after an impressive post-draft tryout his on-field exploits were not quite enough to seal the deal, leading to his release on August 29.

Im weighing 295 [now] and whereas they didnt think that would be an issue before, they just said they couldnt go into games with a 295-pound nose guard, Muhtadi said. I was the lightest nose guard in the entire NFL probably.

Youve got to do what you can with what you got and make every rep count and even though I definitely did that, its a business and if theyre not looking for a 295-pound nose guard out there then theres nothing I can do to change their mind, he said.

Before leaving Green Bay, Packers coaches reassured the Alexandria native that it was indeed his knack for making plays that led them to sign him in the first place, something that was evident in his final preseason appearance with the Packers.

On the field that day against the Titans in Nashville, Muhtadi was on the field for just 11 plays but managed to make the most of the time he had, notching five tackles against one of last seasons best teams.

As a player, thats probably the best thing I couldve heard because it lets me know thats something that is out of my control, its not like it was something I was doing on the field, he said.

While the former T.C. Titan, standing 63 and 295 pounds, is not soon to be recast as the title character in a remake of the Hollywood classic Rudy, his rise from Alexandria high school athletics to professional football is certainly an unlikely feat, as the Packers wrote plainly in his team profile.

Muhtadi transferred from Division III Christopher Newport University to play at Maryland, where he developed into a mainstay on the defensive line by his senior season. When his name wasnt called on Draft Day this year, Muhtadi persisted and successfully navigated his way onto the Green Bay roster.
Its a path very similar to the one he faces now.

Apparently Im on a short list to receive a call from some different teams for either a workout or a spot on a practice squad, Muhtadi said after talking with his agent. There are a few different routes I can expect to go, so I guess Im just waiting my turn again.

Despite the training camp and preseason workout schedule, replete with two-a-days, lifts and hours in the film room, Muhtadi said his first-hand experience solidified his desire to become a professional football player.

If anything, it might even be a little more glamorous than I had thought, Muhtadi said. Maybe its just because Im a rookie, but when I was going through two-a-days it didnt really seem like camp to me because it was a new team, a new opportunity. Every practice I treated like a game.
And those first Green Bay practices of the year tended to resemble the festival atmosphere of game-day more than any practice Muhtadi had seen before.

I think our first day of practice we had something like 10,000 people there to watch, he said. There were more people at practice there than at my games at Christopher Newport.
After weeks of competition, travel, camaraderie pulling pranks on and off  the field with teammates like starting quarterback Aaron Rodgers and the NFL life as a whole, Muhtadi came away thoroughly impressed.

I was taken aback by just about every aspect of it, he said. Whether its just hanging out in the locker room, joking around with Pro Bowlers or just strapping on the pads and going out onto Lambeau field and feeling the whole stadium shake the whole thing is a very gratifying experience.

The T.C. grad came into training camp as something of an unknown commodity, but learned from Dane Randolph, a Maryland teammate and offensive line prospect, that he had grabbed attention on the other side of the ball early in camp, prompting offensive line coaches to ask, Whos this No. 64? Can anyone block this guy?

Having since established the name that went along with that number during his stint with the Packers, Muhtadi must now wait, again, to renew his NFL career.

In the meantime, he said he might try to pick up part-time work at home in Alexandria but something he could drop in a days notice should that fateful call come.

Hopefully I dont have to do anything if I get a call pretty soon, he said. Im not letting this one go. That was too much fun.