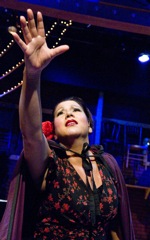 A funny thing happened on the way to decorum. A run-of-DeMille plot has become a pun-filled parody in the Joanne Bogart and Eric Rockwell hit The Musical of Musicals (The Musical!), back by popular demand and now playing at MetroStage.

Using a singular storyline about a young ingnue who cannot pay her rent itself a nod to the Jonathan Larsen blockbuster Rent Musical is a theatre lovers feast as one story becomes five mini-musicals, each lampooning the unmistakable style of some of Broadways most vaulted composers.

You cant parody musical theatre unless you love it the way that Eric and Joanne do, said Carolyn Griffin, producing artistic director of MetroStage. We presented this show two-and-a-half years ago and Ive been storing the sets in my garage all this time because I knew we would do it again.

Reminiscent of the over-the-top wit and sophisticated silliness of the spoofs on the old Carol Burnett Show, Musical hilariously skewers the likes of Rodgers and Hammerstein, Stephen Sondheim, Jerry Herman, Andrew Lloyd Webber and Kander and Ebb.

With a few name changes and some inventive twists, Musical tells the audience how that single plot might have been handled by the various composers, using clever parodies and allusions to music, sets and costumes of their more celebrated works.

Most of the original MetroStage cast from 2007 have reunited, with Donna Migliaccio (Abby), Bobby Smith (Jitter) and Janine Gulisano-Sunday (June) reprising their celebrated roles as the theatre opens its 25th anniversary season.

Added to this production are Matthew Anderson (Willy) and Doug Lawler (pianist/narrator). Heather Mayes is understudying the role of Abby and will take over September 17 when Migliaccio heads to New York to appear in the Broadway production of Ragtime.

Musical opens with Corn!, a riff on the all-American homespun likes of Oklahoma! and Carousel by Rodgers and Hammerstein.

Sondheims brooding, complex scores are next on the chopping block as A Little Complex delves mainly into Sweeney Todd, Company and Into the Woods.

A spoof of the Herman trademark of larger-than-life leading ladies or men in drag impersonating leading ladies closes the first act as Dear Abby takes on Mame, Hello, Dolly! and La Cage Aux Folles. The toe-tapping melodies, sequins and spangles bring the curtain down as the requisite Herman audience led by gay men rises to its feet.

Phantom of the Opera, Evita, Sunset Boulevard and Cats all get a roasting in the Lloyd Webber-inspired Aspects of Junita, where a smoke-choked stage is paired with a precariously dangling chandelier.

Finally, the lights go up on a Kander and Ebb-inspired 30s cabaret in Chicago in Speakeasy, complete with Fosse-esque choreography, gyrating hips and caricatured German accents.

Each member of the ensemble cast is ridiculously talented and they project an infectious enthusiasm that engages the audience throughout the cleverly integrated parodies.

Every joke is deadpanned with spot-on precision and the universally strong vocal performances skillfully pay homage to each composers style.

Smith, most recently seen in the Signature Theatre production of See What I Wanna See, is especially fun to watch as the dastardly landlord slithering with menacing glee throughout the various vignettes.

Migliaccio and Gulisano-Sunday are titanic forces on stage and Anderson and Lawler brilliantly round out the limber cast.

Musical first opened in New York in 2003 and was nominated for five Drama Desk Awards, including Best Musical and the Lucille Lortel Award for Outstanding Musical.

The original MetroStage design team of Allison Campbell (sets), Terry Smith (lighting) and Erin Nungent (costumes) is also back for a return engagement and display an especially adept eye in recreating the diversity of signature theatrical styles.

Musical is smartly written, with barbs that are sophisticated enough to impress the cognoscenti while staying broad enough to entertain even the occasional musical theatre fan.

So, no use sitting all alone in your room. Drink up! Life is a cabernet and all the old chums are back in The Musicals of Musicals (The Musical!) at MetroStage.

The Musical of Musicals (The Musical!) is playing now through October 18 at MetroStage, 1201 North Royal Street. For tickets or more information, call 703-548-9044 or visit www.metrostage.org.