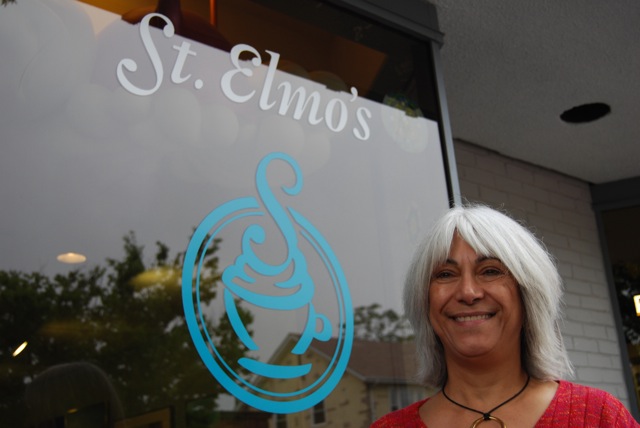 For the last 13 years, Nora Partlow, owner and full-time operator of St. Elmos Coffee Pub, has opened her doors at 6 a.m. and put in her average 16-hour workday. On Sunday, her day of rest, Nora only puts in 11 hours. While you may think thats a ludicrous schedule for someone nearing retirement age, Partlow knows thats the kind of work ethic it takes to make her little shop on the corner the Del Ray staple it is today. Not that she would ever complain about performing a job she loves.

Look, Im not a millionaire, Partlow explains during a recent interview just before closing time, but I feel that I have succeeded in life.  I have my own place that serves what I want it to serve and plays the kind of music I want it to play.

Its the second part of her statement, having the music that Nora wants to play, thats the secret ingredient to St. Elmos esteemed status in the community. While her java may be rich and her baked goods irresistible, its their cravings for live musical acts that keep patrons coming back three to five nights a week. Though that wasnt part of the original business model back in April 1996.

What started out as an experimental concert series after the restaurant expanded from its original 1,000 square-foot layout soon grew into a regular schedule of free music. Not only is there no cover charge for coffeehouse guests, but its truly a sing for your supper operation on Partlows part as well.

Look, I cant pay [the artists], Partlow said. We dont make that much money. But, I let them put out a tip jar, and Ill feed them for the night.

So, has it ever been hard to find folks to play for such paltry wages?

Weve never had to look for acts, Partlow admits. They come looking for us. Word spread among the musical community about how it was a great place to play. We dont allow smoking or alcohol, so it really is something like a Mecca for musicians. Except for maybe auditoriums, youre not going to find [such] an attentive audience who come to listen.

In todays do-it-yourself music business, self-promoters are looking for every avenue available in order to make their names known. This change in artist development has only benefited Noras search for new talent, even if that search leads to some far off destinations.

Just last month, we had a group [called Break of Reality] from New York City that played electric bass [cello] rock, Partlow said. I told them that we dont pay our artists, but they didnt care. I know they didnt make any money since they flew down, but they sold a bunch of CDs and now people in Alexandria know about them, which could lead to D.C. or Richmond, and that could create a following for their band.  Who knows?

While Partlow will book the occasional act from Los Angeles or Chicago in the summertime when such performers are touring the coffeehouse circuit, one of her two main music rules is to foster the local scene.

When I say local, I mean local, she says. If it snows, I expect you to be here, because Im going to be here I just think you build the community by hiring each other the carpenters who built my shop to the bakers I buy from, theyre all from around here.

No cover music. I dont care what you play; just play what youve created. Once I had a guy who played Elvis music all night. If I wanted Elvis, Id hire an impersonator.

When Partlow says she doesnt care what the artists play, its not lip service.  Shes able to list a long assortment of alternative acts to go along with the traditional singer-songwriter genre comprising the small venues mainstay.

Lets see, she considers, weve had rock, R&B, rap, blues, jazz, country&western, bluegrass, opera, and Latin music. Weve had a sitar play. Weve had poetry. Weve even had a Calypso-reggae-gospel minister. Weve had about everything The only thing I ask is for the people to not use profanity we always have been and always will be a family place.

I wish there were more places like this, where you can have a cup of coffee, talk to one another, and enjoy some great music America just doesnt have enough places like St. Elmos.