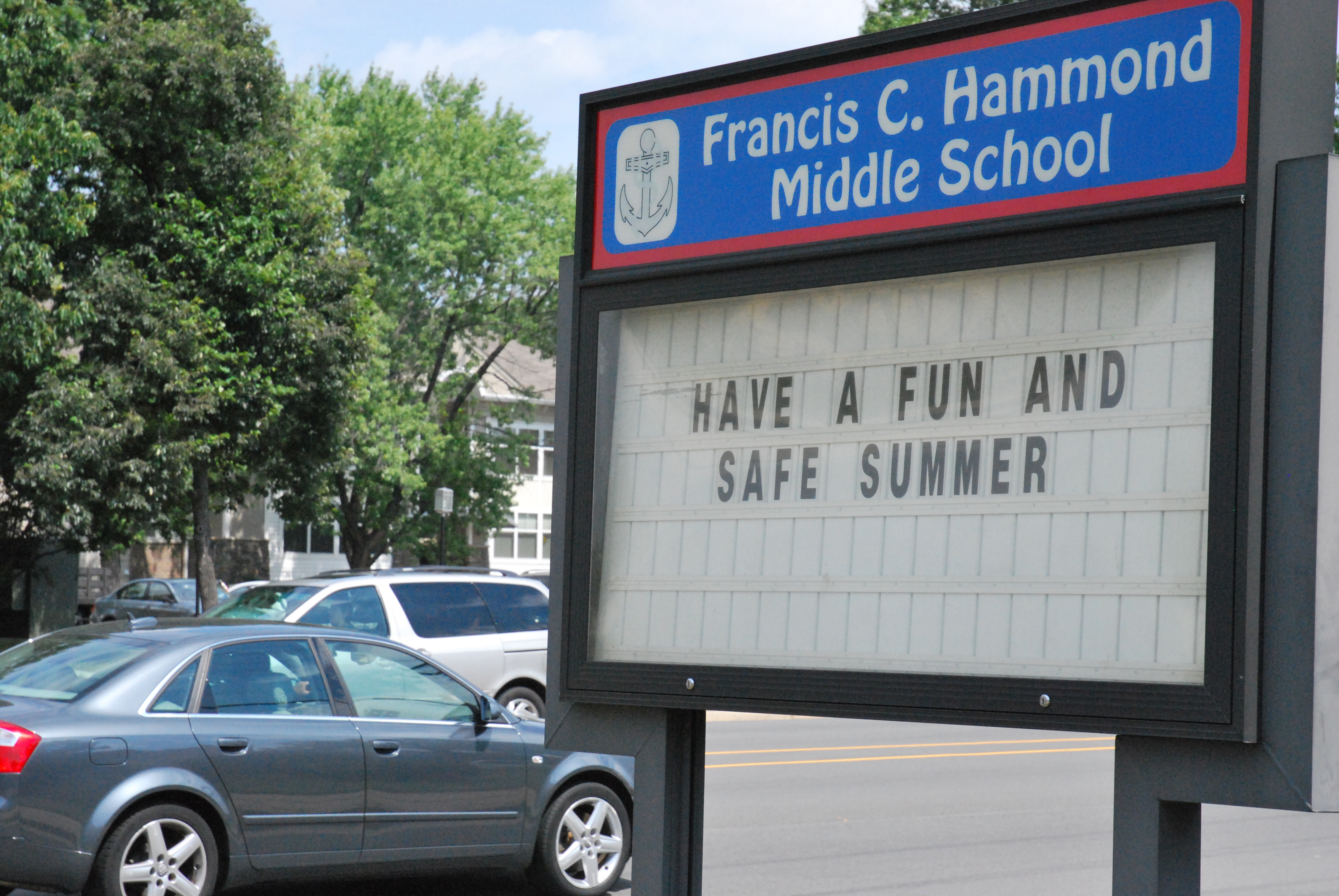 Despite being more than three decades removed from the halls of their high school years, school spirit still runs deep for many graduates of Alexandrias former Francis C. Hammond and George Washington high schools.

In light of the recent changes at both locations the creation of five middle schools from within the existing two the schools alumni associations have begun an organized effort to preserve as much history as they can at their beloved alma maters.
After seeing cosmetic work being done to the new school entrances and learning that the five new middle schools could be taking on new names and colors, many alumni were distraught at the thought that their old school traditions might be at the end of their days.

It seems to me that all of this was done without any kind of thought of contacting us and letting us know what was going on, said David Beach, the G.W. alumni association president and member of the class of 1955.

Beach said that most alumni, himself included, had not seen coverage of last years decision to transform the two historic schools. Since finding out last month, though, he and other alumni leaders began a letter-to-the-editor campaign, writing local media outlets and school officials about their unease with the current situation.

Yet, that situation is not one that will be resolved hastily or without the input from the alumni, according to school officials.

The naming process for the five new middle schools will take several months and there will be many opportunities for alumni, parents, students and teachers to have input, Alexandria City Public Schools spokesperson Amy Carlini said, reiterating what the schools have said since the question about the new schools names was raised in the spring.

Beach said he understands the educational benefits of creating smaller learning communities at the middle school level, but changing the name of the school, for one, I think would be a bad thing, and changing the colors and the history that goes along with them I would hate to have any of those things changed.

I hope that the alumni understand that there is no recommendation to change the names of the schools, change the mascots or the colors, said Alexandria Superintendent Morton Sherman.
When the five schools choose their school names, the campus names are not going to go away, Carlini said. We will always refer to the Francis C. Hammond Middle School Campus and the George Washington Middle School Campus.

However, any threat to the historic significance attached to the schools names and traditions comes as an affront to some alumni.

Any name change would dishonor a hero, a Medal of Honor recipient in Francis C. Hammond, said Kassy Benson, a 1962 Hammond graduate. I just could not imagine changing the name of that school.
The former George Washington High School claimed for its namesake the nations first president and the citys most famous son, while Hammond was named in honor of Francis C. Hammond, a 1949 G.W. grad who was granted the Congressional Medal of Honor for his valiant service in the Korean War that took his life.

We are very concerned about changing the colors which honor Francis C. Hammond, Benson said. It goes farther than just choosing colors, the Navy blue and white were chosen to honor him.
It seems like this is a fait accompli, that this is already in effect without any information or input from our part of what we would like, Beach said. Our feeling is that we dont want the name of the schools changed, we dont want the colors changed or the alma mater songs erased.

G.W. and Hammond have not held high school graduation ceremonies since the formation of T.C. Williams as Alexandrias lone public high school in 1971 the first troubling piece of news for graduates of the two schools.

Back when Hammond and G.W. ceased being a high school, people who had attended Hammond for a number of years were not happy, Benson said of the school districts 1971 reorganization. Weve always been unhappy that we lost our high school.

School Board Chair Yvonne Folkerts said that the potential for alumni protests had not factored into the Boards decision-making last spring and she had not heard from any alumni about the changes until very recently when they noticed the cosmetic changes to their schools.

Im very glad that they reached out and contacted us and I have apologized to them that we didnt reach out when we first started this work and explained what we were doing, Folkerts said.
It really wasnt looked at as a significant issue because we never talked about changing the names for us it was always intended to be historically accurate and with great integrity to honor the school, Sherman said, recalling how school leadership preserved the name of the Minnie Howard school when it was incorporated into T.C. Williams last year.

Board member Marc Williams agreed with Folkerts that the alumni should be involved in the process of distinguishing the new middle schools from one another, viewing it as a unique opportunity for the G.W. and Hammond alumni community.

Some alums are not as concerned as Beach or Benson with what might happen to the current incarnations of G.W. and Hammond.

Sarah Capponi, a member of the G.W. class of 1959, said that it was sad to see G.W. go but now, with her high school no longer in existence, its fate is not exceptionally high on her priority list.

Theyre not singing the songs any more, its not a high school, Capponi said. It really means nothing now except to us. We have the alumni associations so if we want to remember the school thats fine.

As far as Im concerned, if they want to change the colors to orange and green and march out onto the field as the leafy vegetables, I dont care, Capponi said.

Right now, however, barely a week into the new school year, the new middle schools are more preoccupied with the business of school than the naming process that remains many months away from a verdict, something Williams believes will prove to be pragmatic and respectful.

I think the [naming] process is how a balance will be achieved, Williams said. It seems to me that whenever you do something like this, youre going to take the best of the old and then innovate on top of that and youll come out with something new and even more exciting that builds on that great foundation.