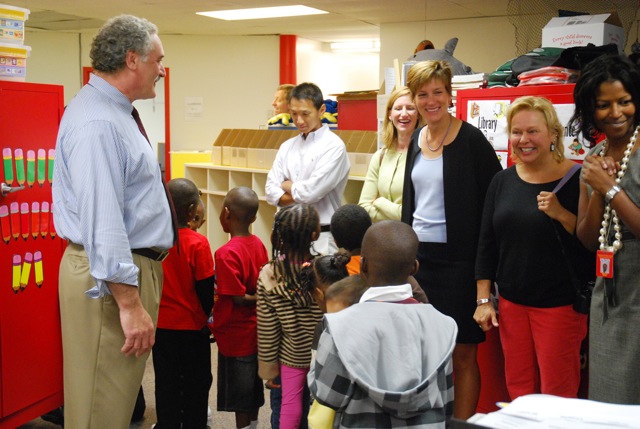 Tuesday marked the arrival of another school year in Alexandria City Public Schools, but it was just another day on the calendar as school leaders renew their efforts to improve educational results across the city.

After a 2008-2009 school year that saw a number of sweeping structural and curricular changes in the citys schools, the main priorities for the year to come is making sure those changes bear fruit and improving the services already offered, according to school leaders.

Weve seen a lot of changes, said School Board Member Marc Williams. Now theres a lot of attention being paid to what goes on inside the buildings to make sure each student has what he or she needs to meet their potential. Its the same mission and were continuing to pursue it.

Among the changes made last year were the move from two large middle schools to five smaller ones, the transition of Jefferson-Houston into a kindergarten through 8th grade school and the School Boards adoption of a new five-year strategic plan, which eliminates what had been a piecemeal, reactionary approach to issues facing the school system.

Our goals are already laid out in the strategic plan and I think thats how were going to achieve success, is to keep focused on our goals, Williams said. Were not going to keep changing our course [this year].

Last years changes were simultaneous with a record surge in enrollment, budget cuts for the first time in memory and new evidence of its persistent minority achievement gap and dropout rate all issues that continue to weigh heavily this year.

Those things we had last year are still going to be there this year and we have to continue to find ways to think outside the box, School Board Chair Yvonne Folkerts said, adding that she expects more creative ideas to come from school administration in dealing with the districts challenges.
As school administrators and the citys School Board begin to chart the course of the new year at their first meeting tonight armed with their Strategic Plan they are not looking to implement changes in the same fashion as a year ago.

Im not looking for new programs at all this year, said ACPS Superintendent Morton Sherman. What Im looking for are deep changes in the classroom and use of resources that enables our kids to achieve at the levels they should be achieving.

Helen Morris, one of two new School Board members, was on essentially the same page.
Were making sure that nobody falls through the cracks, making sure that the middle schools are firing on all cylinders, doing what theyre supposed to do thats going to be a key focus, Morris said.

Mimi Carter, the other new face on the School Board, said that business as usual is over when it comes to improving how students learn and perform, regardless of their strengths or weaknesses, which became even more apparent at the Boards summer retreat.

There, Sherman proposed the idea that ACPS should redouble its efforts toward meeting the federal Adequate Yearly Progress benchmarks by 2011 rather than 2014, something Board members seemed to agree with.

That was an incredibly interesting conversation, a bold and daring quest to us, and I think the School Board would like to see us meet that earlier, Folkerts said.

Folkerts also pointed out that such focus would require even more from educators. While recognizing that fact, other Board members cited the basic imperative of Shermans proposal as its driving force.

[Shermans] position on it is if we dont meet 100 percent this year, then were saying to 20 percent, Its not your year, you dont get to pass this year, Morris said. If you look at it that way, how can we do that to any of our children? 2014 is too far away.

We shouldnt excuse anyone from meeting a minimum standard.

With even more students expected to be under his supervision in the new school year, Sherman said the focus must remain on improving their education and performance.

Weve languished near the bottom of the list of school divisions here in Northern Virginia and we shouldnt be at the bottom, Sherman said. So my emphasis will be doing our work better, smarter and with higher achievement results and that doesnt require new programs or structural changes.