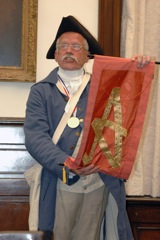 Can the city catch a break?

The city governments very first legislative meeting of the year began Tuesday with the mantra, Budget. Budget. Budget, from Mayor Bill Euille as he stressed the City Councils most overarching focal point and the parameters around which much of the citys decisions will be based this fiscal year.

Compensation raises for city employees are frozen, city departments have been asked to cut costs and Alexandria faces looming budget gaps. It got worse on Tuesday.

Legislative Director Bernie Caton presented Council with preliminary estimates of reductions in state aid to the city, announced by Gov. Tim Kaine earlier in the day, that will likely total more than $1.3 million.

City staff had not yet had time to thoroughly address the 57-page document, Caton said, but the preliminary sketches indicate further service and budget cuts in the city. Some of the figures are unclear because the cuts from the Commonwealth are listed as percentages and the city is unsure of the base numbers the state is using.

We had to compare what was being cut to what we have in our budget, Caton said. What we have now is what we think we have in terms of reductions and well be updating this as we get better information.

We have a quarter million dollars being cut from the Sheriffs Department, yet we are housing state prisoners at a rate of reimbursement less than it costs to house them, Donley said. Not only do they cut the aid but they dont reimburse us for doing their job for them.

Significant social safety net services will likely be cut as well. The Alexandria Pharmacy will likely be eliminated, and services like confidential HIV testing will be reduced while the Arlandria Clinic also stands to lose funding, among other programs.

The next step is to refine the reduction estimates to more precise figures, Caton said.

iPods Count For Something

If residents are hesitant about answering forms for the upcoming 2010 U.S. Census, city officials hope that $30,000 worth of iPods, reusable shopping bags, flash drives and advertising will wet the ink in their pens.

In the first vote of the legislative season, the City Council voted 5 to 1 in favor of allocating the money from the contingent reserve fund to the Complete Count Committee hoping to entice more participation in the Census, which could mean more federal funds for the city down the road. About $300 billion a year is allocated to American localities based on census figures, according to a Council memo, and more participants would reflect the city more accurately.

Last years Council was often characterized by unanimous votes, but the first one of the year could be an omen for a legislative body that is more heterogeneous than years past. Councilwoman Alicia Hughes cited fiscal responsibility as the only dissenter in her first legislative meeting as a politician.

The likes of download cards and iPods to give to children, coming out of the city funds Im not very comfortable with this.

City staff said that marketing the Census to the 3,300-person target group now could translate to $30 million over the next decade. The giveaways would come with messages relating to the Census.
In our experience in reaching the targeted households it really is the children that are one of the most important gateways in getting the message to the household, said Karl Moritz, deputy director of the Planning and Zoning Department. Part of the values of these items is that theyre toys but they attract the child to the message that were giving.

Modernizing the Law on Medieval Weaponry

There has been no Braveheart-esque uprising yet, but shooting bows and arrows on private property in Alexandria is soon to be illegal.

When police responded to a call from a resident complaining that a neighbor was shooting a bow and arrow from his own yard last June, they could do nothing to appease the caller or scold the neighbor. There was nothing illegal about it.

Mayor Euille received the complaint too and, even after the cops had been called, the neighbor found arrows lodged in the yard, which apparently was threatening because of the small size and close proximity of the neighbors property. Still, nothing could be done.

On Tuesday night, though, Council vowed to make an ordinance prohibiting the shooting of compound bows, crossbows, longbows and recurve bows upon the property of another without permission from the owner or tenant of the property to parallel it with the state code.
The penalty would be a misdemeanor with a maximum fine of $250.