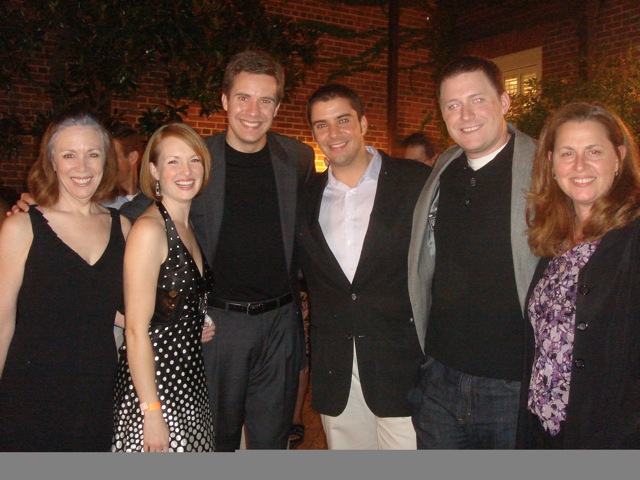 Playwright Larry Shue knows first-hand the meaning of the word gaijin Japanese for foreigner or alien.

While studying with a theatre company in Japan, he realized that even his most bizarre behavior would be tolerated politely dismissed as the uninformed conduct of an outsider. It was these experiences that inspired the uproarious award-winning play The Foreigner, now playing at the Little Theatre of Alexandria.

Set in a remote fishing lodge in rural Georgia, The Foreigner tells the story of Charlie Baker (Matthew Hartman), an exceptionally shy and personality-challenged English chap who panics at the thought of making conversation with strangers. Charlie is brought to the lodge by his friend Froggy Le Seuer (John McCracken) who, before he leaves, tells everyone that Charlie is from some obscure country and speaks no English.

Thinking he cannot understand them, the other residents of the lodge continue their conversations as if Charlie were not there. Hilarity ensues when he overhears the evil plans of a sinister minister and his bigoted cohort and decides to take action.

Charlie is befriended by Betty Meeks (Mollie Wise), the delightfully ditsy widow who owns the lodge that becomes the target of the local Ku Klux Klan chapter. Eager to please, Betty is convinced Charlie will understand her by shouting and punctuating her words with hysterically exaggerated gestures.

Simple-minded Ellard (Nathan Tatro), who the others have written off as mentally incompetent, is one of the guests at the lodge, along with his self-centered debutante sister Catherine (Nicole Goeden) and her fianc, the Reverend David Lee (Michael Reid).

Owen (David James) is the raging redneck trying to seize the lodge from the befuddled Betty as part of his plan to rid the world or at least the state of Georgia of all foreigners, which in this case means anyone who is not white.

It doesnt take long for Charlie to realize he must transform himself from awkward loner to resourceful raconteur if he hopes to foil the foes of his newly adopted family.

Hartman, a GW Community School teacher by day, is brilliant as Charlie and deftly handles Shues witty wordplay with comic ingenuity. Even when he is not saying a word (or perhaps especially then) he has the crowd laughing out loud.

One of the funniest scenes in theatre is a perfectly synchronized game of Mirror with Hartman and Tatro, a breakfast table and two empty juice glasses. But its in the laugh-until-you-cry solo monologue/pantomime, told in some obscure Eastern European-sounding gibberish, where Hartman is truly extraordinary and transforms Charlie into an endearing hero.

Wise, making her LTA debut, delivers a spirited performance with impeccable comedic timing, while Tatro brings a touching dignity to the role of Ellard.

Goeden is the feisty Catherine, a disillusioned debutant with a heart, and McCrackens solid performance as Froggy sets the stage for the entire play.

Reid and James team up to play the narrow-minded villains, with Reid as the slimy, conniving Reverend and James as the credible and intensely menacing Owen.

Each of the immensely talented actors seems to savor their roles and their enthusiasm is infectious throughout the play.

The physical production itself is outstanding, with a striking set by Erin Cumbo highlighted by a magnificent fieldstone fireplace. Costumes by Jean Schlichting and Kit Sibley recall the 1980s and David Correias sound combines with lighting by Franklin Coleman to realistically create special effects ranging from thunderstorms to explosions.

Frank Pasqualinos skillful direction moves the action along quickly and hilariously, making the work of the actors look effortless.

The Foreigner won two Obie Awards and two Outer Critic Circle Awards as Best New American Play when it debuted in 1984. With one comic surprise after another, Shue created one of the most beloved and crowd-pleasing comedies in community theatre repertory.

(Sadly, the comic genius of Shue also known for The Nerd was cut short at the age of 39 when he was killed in a commuter plane crash near Harrisonburg, Va., on September 23, 1985.)

Produced by Rachel Alberts and Michele Bell, The Foreigner is a terrific comedy providing non-stop laughter and fun for the whole family.  And while the farce may be filled with different dialects, the resounding applause was easily translated into one universally-understood and well-deserved ovation.

The Foreigner is playing now through October 3 at the Little Theatre of Alexandria, 600 Wolfe Street. For tickets or more information, call 703-683-0496 or visit www.thelittletheatre.com.