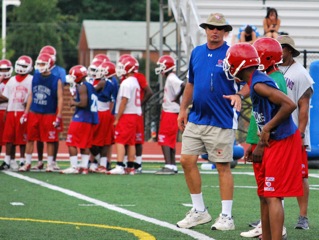 Heading into Thursdays season opener at Robinson High School, the T.C. Williams football team sits poised on a knifes edge. On one side exists the haunting streak of consecutive losing seasons dating back to the mid-1990s, while on the other lies the potential for the programs breakthrough: A revival.

Coming off of a 3-7 campaign last year and having lost senior quarterback and projected starter Joe Hargrove to a broken wrist for at least three or four weeks, some skeptics may consider the Titans prognosis bleak.

With a down of regular season football yet to be played in the 2009 season, however, T.C. head coach Dennis Randolph has reasons to remain optimistic about his teams potential.

We were 3-7 [last year] and lost two games in overtime, one at the end of the game we were four or five plays from being 6-4 or 7-3, he said. Theres that little intangible thing that weve got to start believing, and I saw signs of that last game.

Already, T.C. has posted strong performances in its two preseason scrimmages against Marshall and Centreville, the latter resulting in a 24-12 win as well as Hargroves injury to his non-throwing arm.

If the Titans three-time state champions without a winning record since 1995 manage to chart a winning course this season, they plan to do so by getting the most out of their teams speed and depth at the skill positions in a spread offense that has changed somewhat since Hargroves injury.
We have a tremendous amount of talent and speed, Randolph said. One of the things we wanted to do was get the ball in the hands of a bunch of different guys.

The responsibility now falls on John Bray, Randolphs other senior signal-caller, to distribute the pigskin to T.C.s playmakers at wide receiver and running back.

Throughout the summer Bray and Hargrove had split time equally at various camps, something that has since proved a blessing in disguise but was at times irksome for Hargrove, who Randolph said had a little better command of whats going on, throws the ball deeper and keeps teams more honest.
Joe would walk into the game, throw one pass and throw it 55 yards into the end zone and wed score, the Titans coach said. The next series, John would go out and hed take them in four or five plays and move down the field and score throwing the shorter stuff. The bottom line was we scored and John moved them down the field to do that. They both had their moments.

Without Hargrove, a deep ball specialist, taking the snaps, T.C. will need to come up with some slightly different ways to get the ball to the Titans playmakers like senior captains Robbie Carter and Cortez Taylor.

We have about seven or eight kids that are going to touch the ball every game, so its not like theres one guy weve got to lean on, Randolph said.

Size on the offensive and defensive lines should prove to be another strength for the Titans, with junior Jay Whitmire (6 6, 285) and senior Luke Dorris (6 4, 275) anchoring play in the trenches.
Even with Joe getting hurt, we still have a good nucleus, Randolph said, adding that the Titans retained key players on the defensive line and in the secondary from last season but are still incorporating new faces at linebacker. We have a lot of kids that are pretty good [at linebacker] but they dont have a lot of game experience.

Before the Titans begin to look too eagerly down the schedule, Randolph said the Titans must shake off one of the programs primary bugaboos in recent years: a lack of self-confidence.

For a long time, the biggest problem is when anything happens that is out of the ordinary and doesnt go their way they have a little bit of a let down, he said. There are times when they havent done that in the past but there are times when they just implode and its not because of effort, because theyre bad kids or they dont work hard and come to practice. Its hard to put your finger on it something just happens.

He cited last years game against state semifinalists Oakton when, leading through three quarters, the Titans imploded and allowed the Cougars to score 16 points in the fourth quarter en route to a 29-23 win.

We were beating them the whole game and then it was like a switch went off and they went from being competitive to letting them have their way with us, Randolph said. We have a history of doing that here for the last 20 years, so weve got to snap out of that.