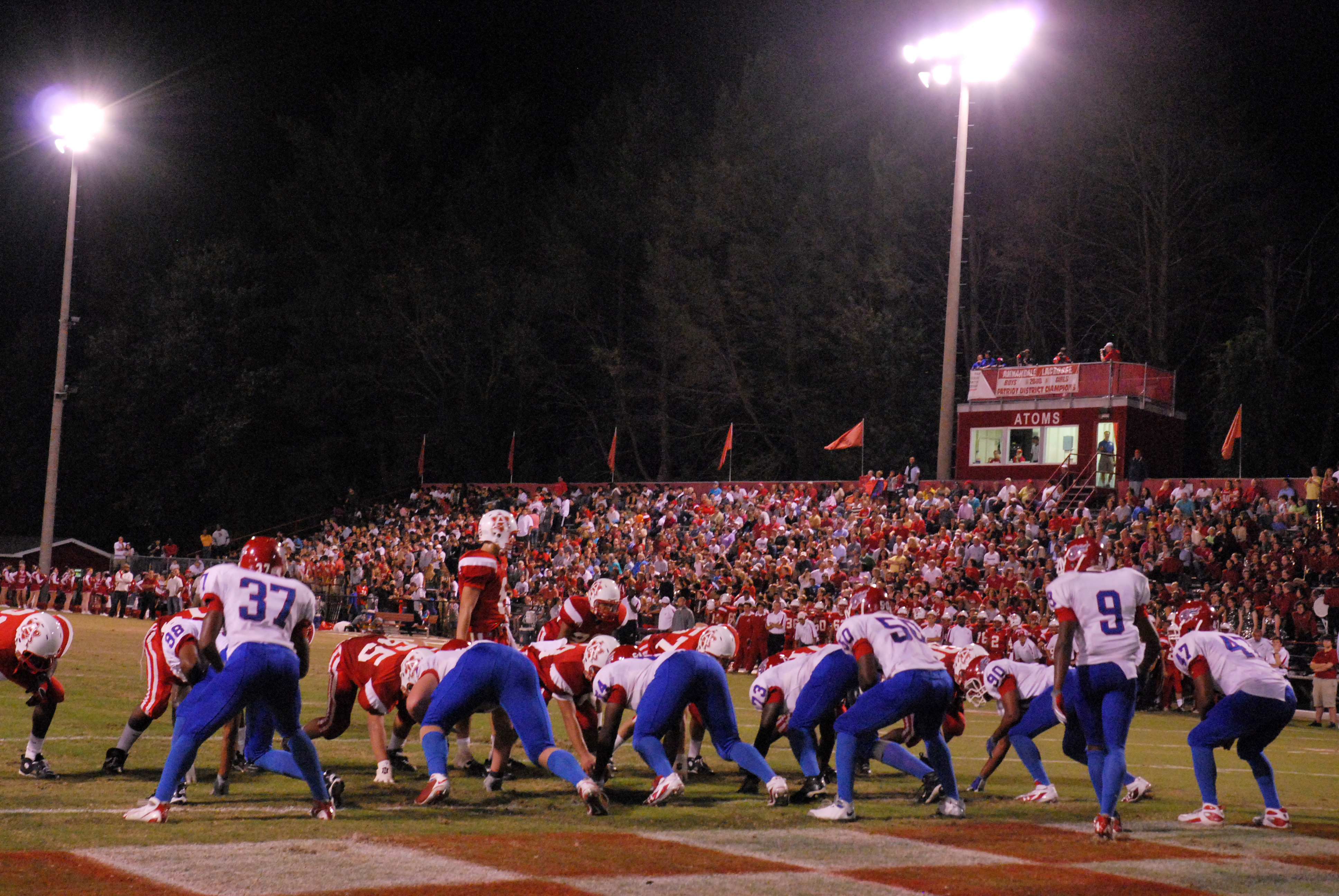 For those Alexandria football fans that have been faithfully keeping score at home since 1969, this week 40 years later carries special significance.

When the T.C. Williams Titans run onto the field at Parker-Gray Memorial Stadium this Saturday afternoon against W.T. Woodson, it will mark the citys fourth decade of public high school football without the allure and pageantry of nighttime home games.

Throughout the region and across the country, many schools uphold the distinctly American tradition of Friday night lights. However, since October 17, 1969 with a lone exception coming last fall at private Episcopal High School Alexandria has not.

According to community members and local media sources at the time, increasing violence, racial tension and dwindling attendance wrought the end of night games for the citys three public schools at the former 15,000-seat George Washington High School stadium in October 1969.

In the years since, the return of Friday night football has gotten a stiff-arm from residents concerned about noise and light pollution in the area around T.C. Williams High School and speculation about more unruly crowds, among other things.
That, though, might finally end next year.

T.C. Williams Athletic Director Bob McKeag said he was pleasantly surprised at the result of a summer meeting with the neighborhood committee, which is now on board for trying an evening contest with portable lighting.

To us, high school football is a Friday night game, McKeag said. It would be nice if we could prove to the neighbors that we can have an event, we can have a great crowd here and have an exciting evening and we can do it right so that everyone can benefit from it.
Officials were unsuccessful in making that happen this season, but it looks as if next season will be when things fall into place.

We have locked in a date for next year, McKeag said, so if all goes well between now and next year we hope to have at least one night event next year.
Tentatively, that game would be Friday night, October 29, against South County, McKeag said.

That date against South County would be 41 years and three state championships in the making for T.C., which, in its current function as Alexandrias only public high school, has never had a nighttime game at the King Street campus.

Before 1969, Alexandrias three public high schools T.C., G.W. and Francis C. Hammond along with Bishop Ireton hosted games at the large, versatile G.W. stadium, according to the Office of Historic Alexandria.

A series of violent incidents and city-wide tension nearly prompted school leaders to abandon night games in 1968, but they deferred and eventually imposed the ban a year later. This time, according to published reports, post-game violence spilled over into Old Town resulting in Molotov cocktail-type firebombs being thrown about the historic district and burning down a home on Queen Street.

Two years later, the three schools merged and T.C. had a state champion football team. Earl Cook, Alexandrias current Chief of Police, was a member of that famous 1971 team and said the decision stung members of that team, which never had a chance to play at home on a Friday night.

To a player, they would have loved to have night games, Cook said. The players felt like [the decision] didnt give its due to the current stock of players.

It became, for me, the safe thing for the adults to do and not the right thing for them to do, he said. Instead of fixing the problem, they simply stopped the tradition.
McKeag dismissed concerns about a repeat of the events that led to the end of night football in the 1960s if the school gets another shot.

That really has not been an issue for a long time, McKeag said. Being from Fairfax County, one of the things you always heard about T.C. is that they werent allowed to have night games because of the student misbehavior and the fights. For those of us that have been around here as long as I have, thats never been an issue.

Bill Simmons, athletic director at Bishop Ireton, also recognized how things have snowballed in the city, which affects his Cambridge Road school lined by single-family homes.

Sometime along the way it became a collection of things so that its almost inevitable theres more mischief at night than there is in the daytime and light pollution used to be a real problem before advances in lighting technology, Simmons said.

Damien Benton, a junior linebacker and defensive leader for the Titans, would love the chance to play a home game with the Friday-night-lights aura but also acknowledged the pre-existing concerns.

I just think they can lighten up on us a little bit, give us something, Benton said. Its been so long that we havent had lights, why not give them to us now? Why not?

Everybody else has lights but T.C., thats what I dont understand. But I feel for them. Lots of stuff goes on at T.C. at nighttime and they dont want that. Thats probably how they feel.

Episcopal High School, the private boarding school that boasts NFL running back Tim Hightower among its alumni, actually broke through last October hosting a night game of their own with portable lights a first for the school, said Assistant Athletic Director Damian Walsh.

It was a very full crowd, it was a very cool atmosphere, Walsh said of the game against St. Albans, the first installment of what the school hopes will be an every-other-year event.

We would love to make it a community deal, Walsh said. We had a lot of local people from the area who just kind of came and thought it was cool to be there.
Hard to Deny Friday Night Lights

Already glorified by numerous high school football movies including one of that very same name, the Friday Night Lights atmosphere has been sorely missed since entering exile about three months after one of this years other famous 40th anniversaries, the first lunar landing.

Cook, who attended some of the final night games at G.W. as a middle school student, remembered the experience fondly.

The atmosphere of a high school game at night, under the lights … it was kind of Americana, Cook said. You went to games at night and you felt like you were in high school at a game and a lot of times that was different from other sports.

The whole sequence of having a pep rally, going from the pep rally to a team meal and then to the game, for the player, adds a whole different atmosphere than getting up [on Saturday], meeting in the morning and then having a day game.

Among those most closely linked to the prevailing atmosphere at a Friday night game the students its a source of disappointment to have home events in the afternoon.

All high school games are supposed to be on Friday nights said Damario, a T.C. junior who lamented whats lost without nighttime home games. It would be like Friday Night Lights. Id love it. Ive seen that movie a hundred times.

Grand, a sophomore Titan who goes to all of the football games, said its not nearly as fun to go to home games during the day.

We go to all these other schools and they have the lights Friday nights, the stands are packed and we dont get to do that, she said.

Id rather have football on a Friday night, said Benhr, a T.C. junior. Saturday mornings you want to just stay home and sleep in rather than go to a mid-day game.

Its a difference the players are quick to point out, too.

Its definitely easier to get up for the games [at night], said junior lineman Jay Whitmire. Its nighttime Friday night lights, you know? Youre ready to go. Thats what high school football is all about.

Everyone interviewed for this story seemed to agree that high school football is meant to be played on Fridays and the proof can be found near the bottom line: Ticket sales.

When I look at some of the gates [receipts] whe
n we play away, we make more money than we do when we play at home and thats on a regular basis, McKeag said. Its not really even close.

On Saturdays you get a lot of conflicts, McKeag added. On Friday nights, generally, people go to high school football games.

Until next year, though, Alexandria football fans will have to continue their years-long wait. For those anticipating their chance to play one Friday night under lights at Parker-Gray Memorial Stadium, it would be a difficult send-off to top.

Hopefully, we get the lights next year, Whitmire said. Thatd be pretty awesome to go out under the lights.