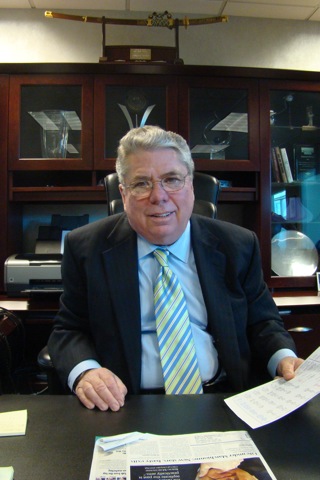 Theres an old Chinese proverb that says, Those who say it cannot be done should not interrupt the person doing it. Yet with so many nonprofit organizations serving the Alexandria community, there is one person that consistently albeit quietly surfaces as someone who is getting things done: Jack Taylor.

Known for his successful Toyota dealership, Taylor goes beyond merely being a benefactor to those most in need by challenging others to donate their own time, talents and resources as well.

What makes Jack Taylor unique is that not only does he give generously, but with every gift he motivates others to join in his commitment, said Susan Yowell, executive director of the Alexandria Scholarship Fund. He recognizes the importance of an educated workforce and he truly believes that every Alexandria student should have the chance to attend college. As a businessman, he has a continuing need for educated employees and a strong economy and hes willing to work hard to make certain that our young people have that opportunity.

Among a multitude of charitable entities that Taylor has supported over the years, the Scholarship Fund and Capital Hospice are two that are closest to his heart.

It isnt that one charity is more important than the other and there are lots of great organizations around Alexandria, said the unassuming Taylor. But these are the two that I have done the most with.

This is a one-high-school town, Taylor said, and no student with good grades and college boards should ever graduate from T.C. Williams and not be able to attend college because of money.
Taylor never misses a chance to encourage others to support this worthy cause and Yowell noted how Taylor has raised the bar for everyone through his matching challenge.

In 2007, Jack announced a $100,000 matching challenge for new donors to the Spring Gala, she said. It wasnt enough to write a big check. After making the formal announcement, he rolled up his sleeves to help us reach that goal. Jack personally made scores of calls to pull in new donors to support something he believed in.

For the last two years, Taylor has also donated a Toyota Prius to be raffled off in support of the Spring Gala.

He then turned around and sold more tickets for that raffle than any other person, Yowell said. He leveraged his own gift to raise even more scholarship dollars.

Taylor is such an Alexandria fixture that many people dont realize he grew up in Falls Church and attended high school at Fork Union Military Academy near Charlottesville. After graduation, he served in Vietnam before obtaining a degree in history from Campbell University in North Carolina in 1972.

After completing college, Taylor returned to Falls Church and took a job working for Bill Page Toyota. Within a year, he and Pages son Frank took over the old Hunter Motors location on Mount Vernon Avenue and opened up Alexandria Toyota. Taylor bought out his partner in 1984 and in 2000 moved the company to its current location on Jefferson Davis Highway.

Im still having fun at the dealership and I like selling cars, Taylor said. Weve managed to do OK even in these tough times.

For much of his career, Taylor worked almost non-stop. He focused his attention on the Toyota dealership 14 hours a day, seven days a week. He is proud of the reputation his dealership enjoys in the community and the fact that Alexandria Toyota has the second largest service department in the nation.

We are balanced, but we can always do better, Taylor said. We always try to treat people as if they are a guest in our home.

It is that work ethic and commitment to customer service that have garnered national attention, with Taylor recently being named as a finalist for the 2010 Time Dealer of the Year award, one of the most prestigious awards in the industry. The winner will be announced in February at the annual convention of the National Automobile Dealers Association and nominees are selected based on exceptional performance in their dealerships combined with distinguished community service.

In addition to the Scholarship Fund, Taylor is committed to supporting Capitol Hospice, a charitable concern that he has been involved with for more than 25 years. Taylors passion for the organization increased last year when his mother Pauline had a recurrence of lung cancer. She used hospice the last four months of her life, losing her battle with the disease in April of this year.

Taylor recently teamed with Capital Hospice to stage a pitch and putt golf tournament in the yard of his home. The mini-golf tournament brought in $175,000, which was matched by the Van Metre Foundation and Taylor has been honored in the past for raising $750,000 for the organization.

Jack Taylor has been the biggest blessing to Capital Hospice, said Malene Davis, president and CEO of the organization. He not only is generous, but he is a philanthropist in every sense of the word. His enthusiasm and fun way is inspirational to me and my staff.

Davis also praised Taylors willingness to share his expertise to help others succeed.

Often Jack lends his business sense to me on a regular basis so we can improve the quality we give to our patients, she said. Jack totally gets the mission of hospice and is dedicated to the work. His beloved mom was a patient in our program and having met Jacks mom before she died, you see where he gets his spirit.

Some of these causes are well-known while others are more sentimental to Taylor, whose son John graduated from Alexandria Country Day School.

Jack Taylor not only supports Alexandria Country Day School, he also wants the best for the school or any other place he believes in, said ACDS headmaster Alexander Exie Harvey. Over the years, Jack has been not only a consistent supporter, but also someone who pushes us to be better fundraisers. Jack has challenged us by the use of matching gifts.

When Taylor is not running the Toyota dealership or giving his time to local charities, he enjoys spending time at his home in Annapolis. His favorite times are when John, now 20 years old, is home from college in North Carolina and the two are able to go out fishing together.

I like motoring around the Chesapeake, Taylor said, although I dont go out deep sea fishing as much anymore.

Its not easy for Taylor to talk about himself or his philanthropic endeavors, but he does have an easy response when people ask him why he does it: Because there is no luggage rack on a hearse, he said. You cant take it with you.

The charities that benefit from Taylors generosity appreciate his philosophy and are grateful.

Jack Taylor supports many good causes in this city, especially those organizations that help youth, Yowell said. We are very grateful for his generosity and for his ability to motivate others to join him.
For more information about the Alexandria Scholarship Fund, visit www/alexscholarshopfund.org. To learn more about Capital Hospice, visit www.capitalhospice.org.