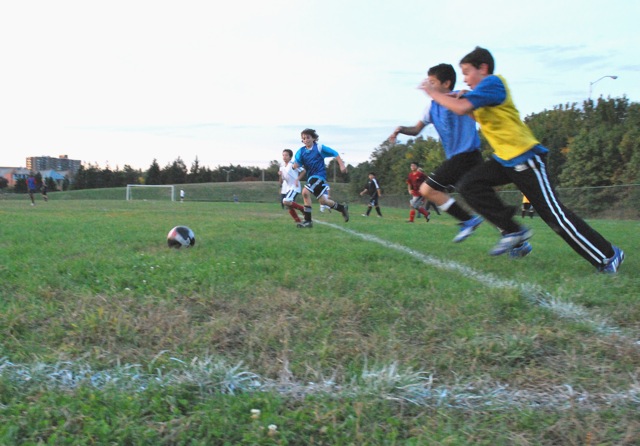 The athletes, still fighting for one more goal in an intra-squad scrimmage, didnt run out of energy, they just ran out of time its hard to play meaningful soccer in the dark.

In a city at odds with itself to find ample space for recreation and continually fighting to keep existing fields playable, the scene was not an uncommon one. It is, however, one that could be markedly different a year from now if a proposal succeeds in converting the grass field to synthetic turf with lights, making it playable well after sunset.

Following a public hearing on the matter last Thursday at Patrick Henry Recreation Center, the project is one step closer to reality with the Park and Recreation Commissions endorsement of a plan to install a new artificial turf field at the West End site.

Many steps remain in the process. Opposition to spend city funds on an athletic field during a money crunch and the special use permit required for additional lighting represents hurdles for the fields proponents. But the prospect illuminates a brighter future for youth sports officials whose best scheduling efforts are limited by Mother Nature.

The issue that we have is a very narrow window because, for the most part, our coaches are volunteers, they have day jobs, so you have to sandwich what you do between their jobs and daylight, said Alexandria Soccer Association President John Timmons.

Last spring, the Alexandria City Council added $900,000 back into its budget for the current fiscal year to accommodate for upgrading one of the citys fields with a lit synthetic surface, which would become the citys fourth all-weather field all constructed within the last three years.

According to the citys presentation during the public hearing, Brenman Park proved to be the optimal location for adding a synthetic field with lights.

The main field at the Francis C. Hammond middle school campus, a long-suffering natural surface in worse condition than the Cameron Station field, came in second but was held back by its proximity to lit artificial turf fields at T.C. Williams Minnie Howard Campus and at Fort Ward Park, according to a recent study of the citys athletic fields.

Part of this proposal and this will all still be going through a public process is that the site at Ben Brenman Park be fully lit to make better use of the synthetic turf field after it was installed, said Jack Browand of the Department of Recreation, Parks and Cultural Activities.

And the lights are sure to be the sticking point for the project, which could cost an estimated $1.5 million, according to the city budget.

Mindy Lyle, interim president of the Cameron Station Civic Association, said area residents are grateful their facility tops the list for improvements, but neighbors are hesitant to welcome additional traffic with open arms.

I think residents are probably split, to be perfectly honest, on whether this is a good thing or a bad thing, Lyle said. I have talked with some people who think it could present a problem but then theres another large number that think its good.

From a personal standpoint, Ive been involved in the meetings on this for months now and I think it has a lot of potential and would be a good thing for the community, she added. I am for anything that can improve the West End as a whole.

The civic association has not yet voted on the proposal, but Lyle expects the issue to be a topic of discussion at the groups next meeting on November 4.

In the meantime, recreation department staff members are solidifying the details of the project, including an up-to-date cost-benefit analysis.

While some taxpayers objected to the city allocating more than $1 million for an athletic field while shedding 117 jobs last fiscal year and expected multimillion dollar service cuts this year, the city can rationalize the project with the long-term value of a properly lighted synthetic field.

According to the citys 2006 athletic field master plan, an artificial turf field at Brenman Park would pay for itself in maintenance savings in less than nine years. If use of the facility more than doubles, as expected, residents would be getting twice the field they currently have with minimal repairs and interruptions of recreational activities.

Certainly, if you take into account the amount that you can play on the field after the synthetic is installed, youre getting a huge value, said Mary Stephenson, a recreation department staff member.

If youre just looking at maintenance now versus maintenance after the installation thats different, she continued, but if you look for maintenance based on the amount of play, its huge.

Last weekend, amidst a constant, soaking rain, ASA had to postpone its busiest weekend of the year. The weather caused poor field conditions, leading to a void in athletic competition Saturday and Sunday.

Thats one quarter of the season, Timmons said. So now, were scrambling to reschedule and, assuming theres no more rain, have a couple of double-game weekends, which is tough on families.

The Brenman soccer field currently gets 44 hours of scheduled use per week during nine months of the year, according to a city budget document. With a synthetic surface and lights, estimates show that number rising to 98 hours a week 12 months out of the year.

Between [synthetic] turf and lights you have a huge leveraging factor, Timmons said. With lights, it lets you schedule twice the capacity and not have to worry about inclement weather ruining the citys playing fields.

Timmons said a more reliable schedule, bolstered by more all-weather fields, would only serve to increase participation and keep Alexandrias kids more active and healthy if it is built.