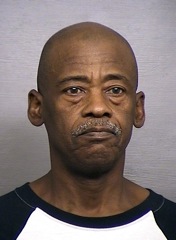 Alexandria police last Friday announced the arrest of Ralph L. Fowler in connection with a string of residential burglaries in south Old Town on and around Labor Day weekend.

Charged with seven counts of burglary, Fowler was arraigned Monday in Alexandria District Court and has a preliminary hearing set for November 17.

Police, still investigating the series of burglaries, are unsure if the crimes are limited to the seven existing charges.

Hes been charged with seven offenses and we believe that hes responsible for more than that, said Capt. Tammy Hooper of the Alexandria Police Department, adding that the total instances could be twice the current number.

Fowler, 61, apparently homeless without a fixed address or place of employment, became the lead suspect in a series of break-in thefts when police were able to trace a stolen television set to a pawn shop in Washington, giving them the link to Fowler, police said.

The detective working the case, Det. Loren King, during his investigation had discovered that Mr. Fowler had been making a lot of pawns, pawning off property in D.C., Maryland and Virginia, Hooper said. After he continued checking pawn shops he was able to get more and more positive identification on property that was taken from various properties.

Fowler was arrested without incident at about 3 p.m. Friday on the 600 block of South Alfred Street where police noticed a car they believed had been stolen by the suspect during the rash of thefts, which were mostly jewelry and other valuables, according to police.

The burglaries occurred at residences where it appeared the owners were not present, often marked by newspapers and mail accumulating in front of the house.

Basically, the pattern was that the residents were, in most cases, away from home on a vacation or away for the weekend, Hooper said. The suspect would then force entry by either prying open a door or breaking a window and then go in the house, look for valuables and then flee.

While very little stood out about the series of residential burglaries, Hooper said, one trait that led police to believe the crimes were related was that they occurred in a short period of time in a very small geographic area.

After the Labor Day holiday, when most of the cases were reported, Alexandria police immediately increased our presence in the south part of Old Town, Hooper said.

Alexandria Chief of Police Earl Cook said the department considered the crimes part of a crime spike rather than a full-blown crime wave.

We put resources on it and ended up catching the guy that was responsible, he said.
Most burglars who do these things do them in a series, Cook said. A burglar is a burglar. They dont go out and just do it sporadically, its usually because they have something behind it, whether its an addiction need or something else.

About 12 hours after Fowlers arrest in Old Town, four Mt. Vernon Avenue businesses were broken into in Del Ray.

They broke through the door but didnt actually get in, said one St. Elmos employee who spoke anonymously, adding that the alarm went off when the door was broken and the burglars did not steal any property.

At Tsim Yung, cashier Wen Liu said nothing of note was taken from the carry-out eatery but the front door had to be replaced.

Chris Gabriel, owner of Natures Nibbles, said the burglars did not set off the alarm in his shop upon smashing the front door, making off with change from the register.

I dont leave cash here ever but I do leave the register open and there is some change in there, so they got about $30 worth of change, Gabriel said, adding that his store experienced about $300 worth of damage on top of the money taken from the till.

At Mias Market, the intruders allegedly took four packs of cigarettes but little else as the alarm sounded and the surveillance cameras caught everything, one employee said.

As of Wednesday afternoon police said no arrests had been made in the Del Ray cases.
The detectives were just assigned on Monday so theyve been pulling surveillance tapes and doing the ground work all week but I dont think we have anything quite yet, police spokesperson Ashley Hildebrandt said.