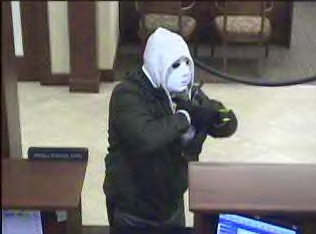 Until about 10:15 a.m., last Saturday was a pretty ordinary day at the BB&T Bank branch at the top of King Street in Old Town.

That all changed, though, when a man in a gray zip-up jacket walked up to a teller and signaling that he had a weapon demanded money before making off with an undisclosed amount of cash, according to the Alexandria Police Department.

The hold-up was the citys third in a span of just 16 days, mirroring a trend law enforcement officials have noticed around the region. Although Alexandria Police have seen a drop in serious crime, the month of October has doubled the number of bank robberies in the city since January 1, bringing the total to six.

Its unusual, definitely, said Alexandria Police spokesperson Ashley Hildebrandt. But [this month] is consistent with a trend were seeing around the area. Its not just Alexandria that is getting hit.

On October 8, the Wachovia Bank at Bradlee Center on King Street was robbed, prompting a brief, successful search for a suspect and requiring schools in the immediate area to be put on lock down.

The second strike came on October 15 when a man wearing a hockey mask held up the M&T Bank on South Washington Street before taking an unknown amount of money, according to police.

An arrest was made in connection with the Wachovia heist, but the other two cases remain unresolved, Hildebrandt said Wednesday. By and large, she said, bank robberies arent isolated incidents.

Most of the people who are doing this dont just hit a bank and thats it. Theres usually a string of robberies, Hildebrandt said, adding that the suspect in the Bradlee Center robbery had been connected to several other area bank heists.

Arlington, too, has been struck by three bank robberies within the last two weeks, according to Det. Crystal Nosal of the Arlington Police Department, who added, Its probably most likely going to come back to the same suspect, but we only have a warrant for the suspect right now for one bank robbery.

Nosal said the three robberies in her jurisdiction were likely related to at least one other recent incident in a Fairfax County bank. As of Tuesday, Arlington police had a warrant out for a suspect in one of the cases, but no arrests had been made.

We could lock up a guy tomorrow and the bank robberies could stop completely because hes been doing it all, Hildebrandt said.

Attempts to speak to BB&T employees for more insight were unsuccessful at the King Street location robbed last Saturday. There, employees said they were not allowed to talk to the media and a corporate spokesperson was unreachable Wednesday afternoon.

At the PNC Bank branch on Lower King Street, though, branch manager J. Caesar Mascarenhas was unable to divulge details about security but said vigilance is a key in avoiding incidents.

All banks have a system in place to prevent burglaries, Mascarenhas said. There is also a post-burglary structure in place.

Although just one arrest could bring a stop to a rash of robberies, it does little to erase the experience for those involved. Mascarenhas said that he had been held up at gunpoint at a previous retail job but gratefully lived to tell about what he considered an incomparable event.

You have to go through it to know the experience, he said. Awareness is the biggest thing, knowing what is going on  in your own confines.

Drawing on his retail experience, Mascarenhas said that thefts often begin to increase during the build-up to the holiday season.

Hildebrandt also dispelled the notion that this recent series of bank robberies were related to the tough economy.

We havent noticed a huge increase in serious crime, Hildebrandt said. Obviously weve had a lot of bank robberies this month, but this is the first wed seen like that and the economy has been down for a while.