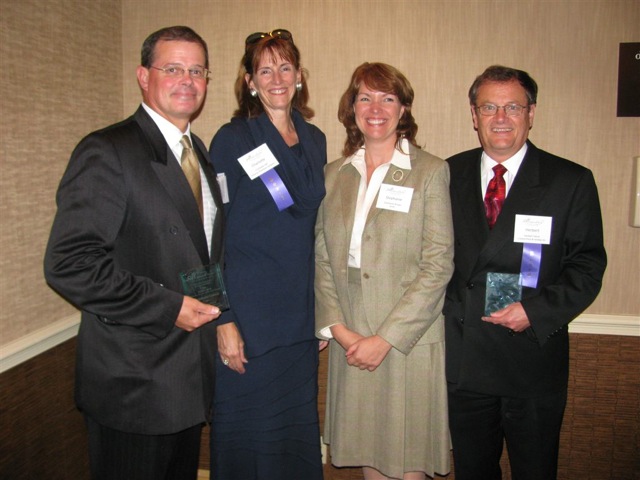 Paraphrasing a line from A Tale of Two Cities, Alexandria Convention and Visitors Association President and CEO Stephanie Brown opened the organizations annual meeting last Thursday with, It has truly been the best of times and worst of times a year of challenges of historic proportions.

She told the audience of ACVA members assembled at the Sheraton Suites on North St. Asaph Street that this year will post the steepest declines the tourism industry has ever experienced. But it has also been a year of renewal that has laid the foundation for success as we look forward together to a more promising economic future.

Part of that foundation was the announcement that Alexandria achieved the fourth largest increase in visitor spending in the Commonwealth in 2008, according to statistics released by the Office of the Governor. That accounted for a rise of 10.3 percent in spending amounting to $645 million, supporting more than 6,000 jobs with a payroll of $111 million, according to the states Economic Impact Estimates of tourism.

An investment of more then $388 million in new construction and renovations by Alexandrias lodging industry has produced more than $171 million in annual room revenue helping to contribute $21 million to the citys tax base. This represents an 11 percent increase.

Herre serves as general manager and Gould as director of sales of the Old Town Crowne Plaza Hotel and Holiday Inn Hotel and Suites. Herre is also president of the Alexandria Hotel Association.
In recognizing the two Partners of the Year, Hall noted that, In spite of these economically challenging times, twice as many partners stepped forward this year than last, for a total of 80.
She also cited many organizations and individuals that work with ACVA in promoting Alexandria as a tourism destination.

Hall recognized Bob Lorenson, owner of the Virginia Shop, as a retiring member of the ACVA Board, presenting him with a glass plaque. A member since 2005, Lorenson served on the executive committee as both vice chairman and member-at-large.

Mayor Bill Euille noted, As I travel throughout the world I constantly get compliments about Alexandria and how charming it is. We are very lucky to have such an organization as ACVA representing our city to the world.

Generally speaking the recession is over, Leisch said in opening his presentation detailing the economic realities facing the nation and Alexandria. But, good luck surviving the recovery.
During this recession consumers lost $13 trillion of their wealth, he said. Thats $46,000 for every man, woman and child in the United States. The big question is, has this created a new normal for consumer spending in the future?

Even though the recession is technically over, the consumer is still in a funk. This recession is much like the one of the early 80s, he said.

Monthly job losses have slowed, leading economic indicators have turned upward, and the manufacturing index is now above 50 all positive signs. But recovery will be slow, Leisch noted. There will be few if any new jobs.

He also pointed out that Americans are saving more. Savings have increased dramatically, he said. Its now running at 5 percent more like the rest of the world. But, consumer confidence and spending will not return to pre-recession levels until 2013, he predicted.

Leisch raised the possibility that the 2013 date may be optimistic because the new savings habits, with less extravagant spending, may now be the U.S. populations new normal. He saw this indicator as good for the overall economic picture but bad for tourism, retail sales and entertainment spending.

One warning signal he sighted was, We are gaining jobs in the upper income brackets and losing jobs in the lower income categories. But, he emphasized, the Washington Metro Area is one of three areas in the nation where job growth has been the greatest, joined by New York and Boston.

We are a company town and that company is the U.S. government, Leisch said.
Some of the worst areas in the nation for job growth and the recessions impact are Phoenix, Chicago and San Francisco.

Cook followed the presentation with some insight on her expertise, the travel industry. We have many more tough days ahead before we can even consider popping the champagne corks, she said. In the travel business frugality reigns. Americans are trading down.

Even though Alexandria lodging bookings are up 5.5 percent for the year, lodging revenues are actually down 5.4 percent, according to Cook.

Travel and tourism nationwide will lose $68 billion in 2009, she said.
Regardless of those stark statistics and predictions, Brown told the audience, ACVA, the city and the business community have strived together to sustain Alexandrias tourism economy. We are enthusiastic about the opportunities that lay ahead.

Brown highlighted some of ACVAs accomplishments over the past year to drive her point home, including a new destination website, VisitAlexandriaVA.com, launching in November with enhanced tools to improve the users experience. The organization also updated its advertising strategy, targeting tourists and destinations in local, regional and national markets.

ACVA has also refocused its meetings and group sales team on the multi-year $388 million investment in Alexandria hotels with the theme of rejuvenation and Meet Alexandria and Keep it in Alexandria. This is designed as a two-pronged approach to confront the economy and backlash against meetings and incentive travel, according to Brown.

A new brand identity for the city replaced the Fun Side of the Potomac slogan with Shop, Dine and Celebrate on Americas Historic Main Streets, as well.