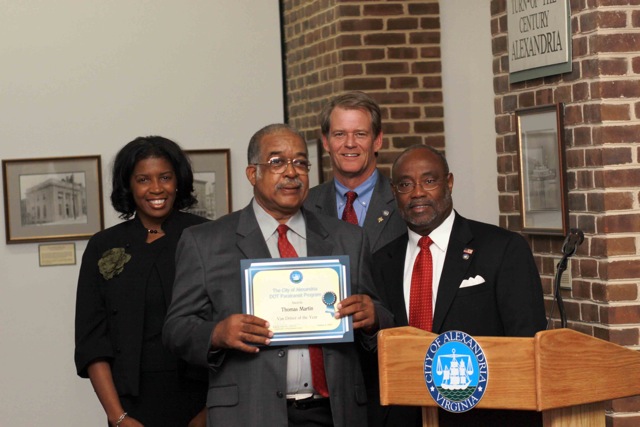 On the day before Christmas in 1983, John Duty Collins III, founder of the Alexandria Commission on Persons With Disabilities, wrote a letter to the City Council. It was not any sort of Christmas card, but it was a gift as the longest tenured commission member Chet Avery put it to disabled residents of both the city and the country.

The letter, influence by a number of disabled residents, promoted the idea of a transportation program for people with special needs to compliment the citys primary public transit system. It got the ball rolling on the Alexandria DOT Paratransit Program six years before the American Disabilities Act made such services mandatory, elevating it to a national model.

The program celebrated its 25-year anniversary Tuesday by recognizing two exceptional drivers for their service Angela Donald of the White Top Cab Company and Thomas Martin of Diamond Transportation Services.

So what you see is that this city, way before it had to, did not only do the right thing, the good thing, but it established a new freedom for people with disabilities, said Avery who, aside from working on behalf of the citys disabled residents, has benefitted from the service himself as a blind man.

The paratransit program establishes an opportunity for people with disabilities to pursue happiness, he said. It gives them an opportunity to leave their home, liberate their families from taking them places and allows them to be independent and to take trips to suit their happiness.
Mayor Bill Euille, Vice Mayor Kerry Donley and Councilwoman Alicia Hughes presented the awards and made proclamations for each driver.

Yes, its a job to them, but its more than just a job, Euille said.

Martin has transported clients of the program from door to door for all of its 25 years and has never received a complaint or had an accident, according to the proclamation. His function became more than simply an employee over the years as he grew closer to his passengers, whom he considers family.

You build relationships with them, you get real close to them and it feels like family, Martin said, adding that as some clients passed away over the years he realized that what he does is more than just a job. And they are very thankful.

Martin picks up some clients as early as 5 a.m. on many days, and on Sundays he sometimes brings them to church, making sure they get to their destination before his own 11 a.m. Mass.

Donald, an Alexandria resident since she was 3 years old, graduated from the citys public school system and has been involved in the paratransit program since 2004. She was distinguished on Tuesday for her courteous and professional nature while transporting special needs clients. In fact, one couple that uses the service refuses to ride with anybody but Donald, calling days in advance to reserve a spot in her cab.

I would like to thank everybody who voted for me and thank the city for giving us a chance to run this program for those who need it, Donald said. It makes life easier and it also makes life a lot safer for them.

The DOT program has grown to provide an average of 2,175 rides a month according to Director of Transportation and Environmental Services Rich Baier. But the figure translates to something more important to those who utilize DOT equal rights.

Tonight, we are not just saluting a transportation program for persons with disabilities, Avery said. We are celebrating a new freedom, a liberty that was established by this city that did not have to do it. So when you see a DOT van or someone stepping into a cab, its not just a trip, its liberty and freedom in action.