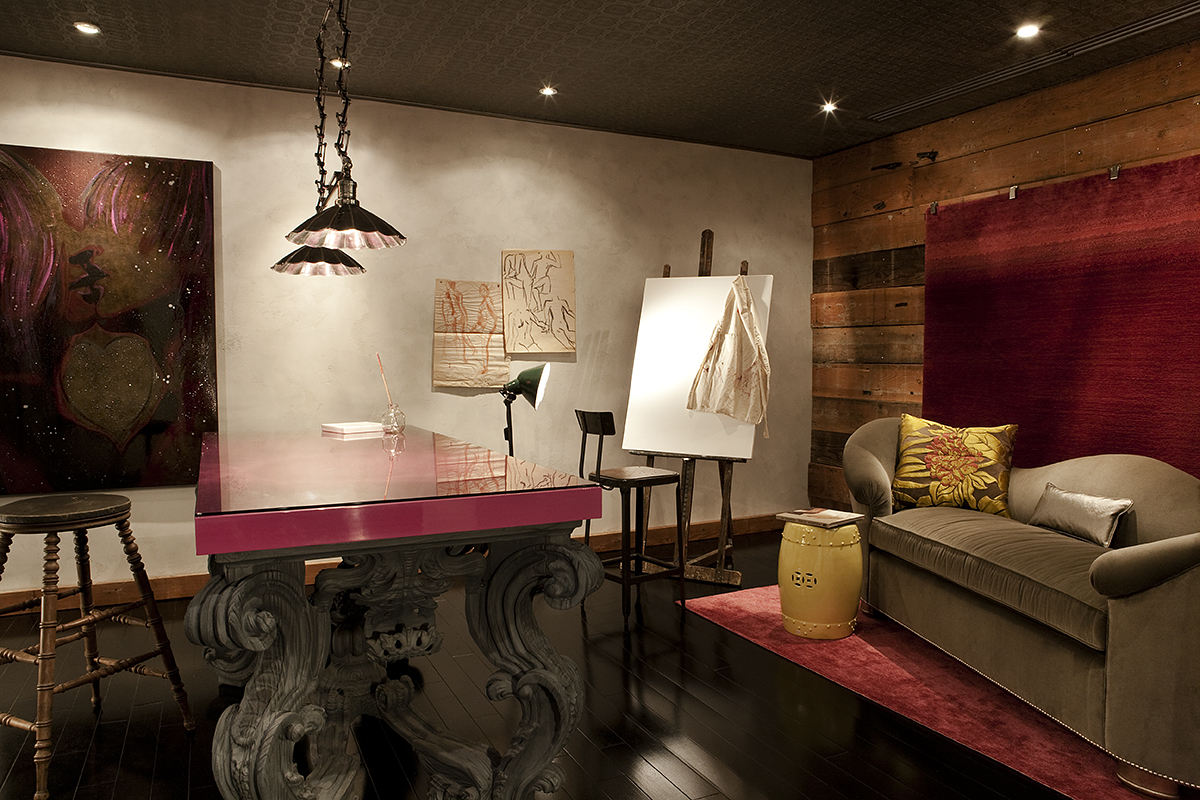 Lori Ludwick of Alexandria is one of the eight area decorators who have created rooms for the Fall Design House at the Washington Design Center. Her artists studio is located behind the foyer, which faces the entrance hall. The other areas provide inspiration for almost every part of the home, including the dining room, bedroom suite, library, parlor and sports lounge.

In her artists studio, the Del Ray designer has staged a scene of startling contrasts. The velvet sofa faces an artists table with elaborate grey rococo legs, beneath a ceiling of faux hammered tin. Behind that comfortable beige couch the walls are rough, bare wood above a concrete floor. These neutral tones also stand in sharp contrast to the magenta rug and lacquered table top. The colors are also combined in the abstract painting.

In addition, she juxtaposed old and new materials in the artists work table, which she calls the centerpiece of the collection. The new magenta lacquer top was added to the rococo legs, which were reproduced from the Palazzo Capponi in Florence.

Ludwick explained that her creation followed the design house theme, Potomac Fever. The exhibits were intended to celebrate all that Washington, D.C., has to offer, in history, politics, culture, art and electic neighborhoods.

With each room reflecting a different historic district, Ludwick was inspired by U Street. I wanted it to represent the grittiness of the inner city, merging with the young heartbeat of inventive style, she said.

Bearing no resemblance to her own home studio, It is more of a fantasy room than reality, she explained.

It tells a story, too. The wood plank wall and concrete floor look as though they were found in an industrial neighborhood and the artist in residence is temporarily using a magenta rug as the backdrop for his most recent painting. His presence is suggested by the stained apron thrown over the easel.

It all reflects the U Street section of Washington, which she saw as a fresh, gritty beacon of style, seamlessly mixing old and new in a culturally diverse area.

Having deteriorated into an area of homelessness and drug use in the 1960s, it changed with the opening of a Metro stop in 1991, she recalled. Today, a racially diverse crowd of tattoed musicians and Congressional staff members frequent the areas stylish new shops, restaurants, bars and clubs. That crowd is likely to include some artists as well, taking a break from their studios.

In that same mix-and-match spirit, she tries to integrate her private clients existing furniture and accessories into her designs for industrial lofts, historic row houses and suburban homes.

Known for her clean, contemporary style featuring custom woodwork, she designed that wooden wall for her artists studio exhibit using her skill to make it look completely natural.

Admission is free to the design house, which will be open to the public through Saturday, December 12, Monday through Friday from 9 a.m. to 5 p.m. and Saturday from 10 a.m. to 3 p.m. The Washington Design Center is located at 300 D Street SW, above the Federal Southwest Metro station, which is served by the Orange and Blue lines. For more information call 202-554-5053.