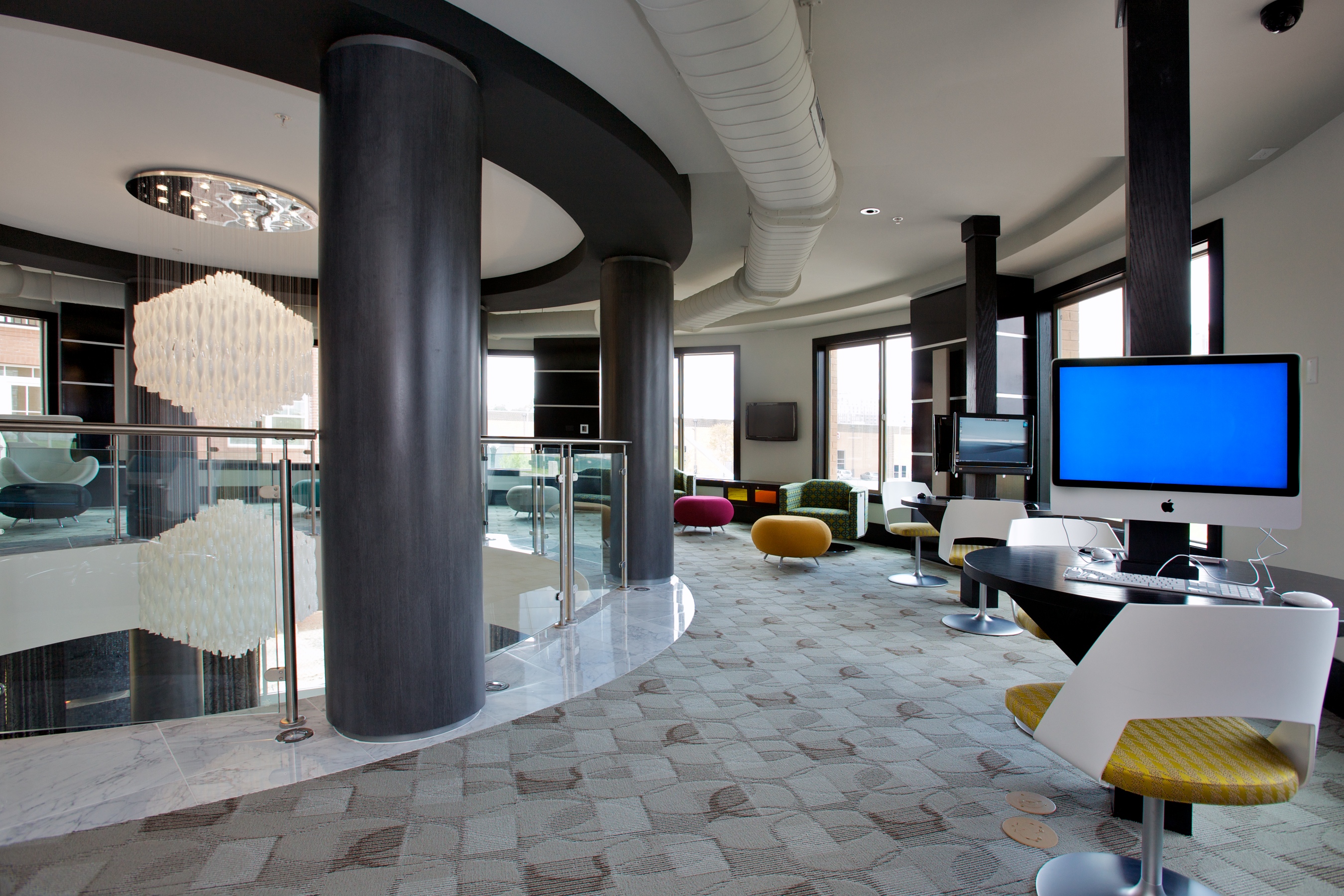 Whoa! Your kitchen is so futuristic! The Alexan Carlyles recorded message insists that your visitors will respond that way to your new apartment.

They will probably have the same reaction to the business center, recreation room and reception area, which won this years Great American Living Award for the best rental clubhouse interior design.

That business center demands attention, too. Its striking design calls to mind a cruise ship or a starship with black pillars framing the lower level.

Bordered in black, the full-length bay windows stand beside computer stations on a patterned grey carpet. Turquoise, fuchsia and yellow ottoman cushions add a jolt of color to the starkly simple scene.

Next to the lobby, the recreation room shows the same space-age spirit. A yellow mirror covers one wall while displaying two of the six TV and game screens. Blue, turquoise and yellow accents enliven the cushions. The same colors appear in the modern painting above the black-and-white snack bar. Colorful billiard balls adorn the game table and magazine shelves frame another TV screen.

The decorated one-bedroom model follows the same theme. Like the public areas, it shows a striking futuristic style, combining black and white with jolts of vivid color.

Behind the white sofa and the square black coffee table, the grey accent wall stands beside grey brocade draperies framing the Juliet balcony. In some units, tenants can choose the color for the accent wall.

In the bathroom, blue and green towels hang next to a blue shower curtain. The adjoining bedroom displays blue draperies against a grey wall, thus enhancing and unifying the area.

This lively, contemporary spirit continues in the Carlyle community across Eisenhower Avenue. Restaurants include Starbucks, Potbelly Sandwich Works and Jerrys Subs, with a Whole Foods Market around the corner. Across Duke Street, the choices include Dukes Bar&Grill, Quattro Fromaggi, Brooklyn Deli and, for a refreshingly old-fashioned touch, the beloved local landmark Table Talk.

Held at the Ritz Carlton Hotel in Tysons Corner on September 29, the GALA ceremony could be compared to the Oscars and Emmys combined. They blended the previous Monument awards for architecture and the Major Achievements in Marketing prizes for interior design and marketing. The awards were presented by the Northern Virginia Building Industry Association, the Maryland National Capital Building Industry Association and the Washington Metropolitan Sales and Marketing Council.