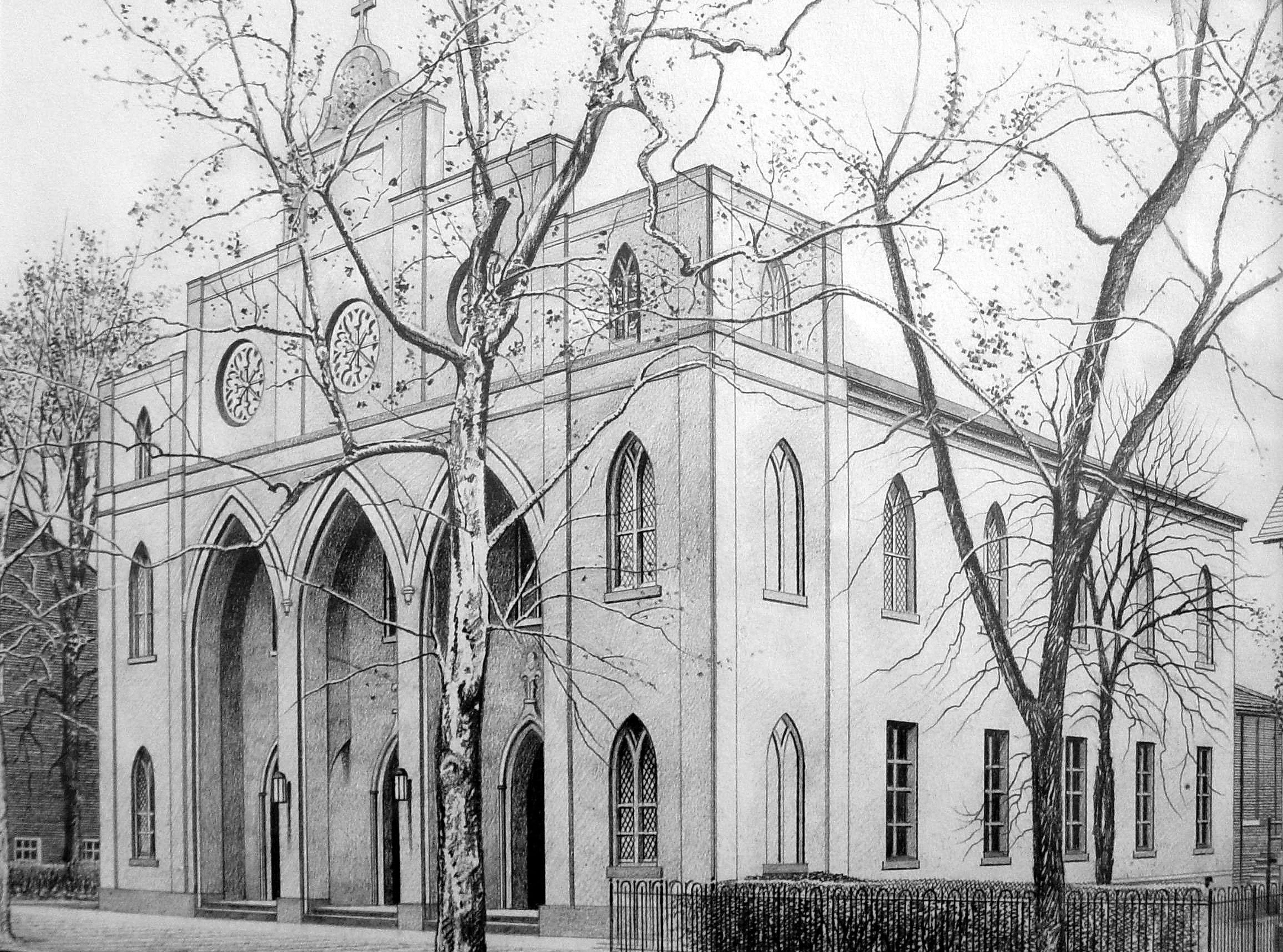 Two centuries ago on November 12, 1809, a small group of worshipers met in a diminutive structure on what is now the 200 block of South Fairfax Street, just a short distance from where St. Pauls Episcopal Church stands today. Little did they know that their service would mark the beginning of a church that would stand the test of time, surviving wars and ecclesiastical strife, and carry on their humble fellowship in a spectacular 19th century building.

Bicentennial celebrations for the landmark church kicked off one year ago and festivities will culminate Sunday when the congregation holds a reception to honor several descendants of the St. Pauls Founding Families as well as the 200th birthday of the church congregation. In addition, local historian and parishioner Ruth Lincoln Kayes second volume of the History of St. Pauls Episcopal Church from 1984-2009 will be released to the public.

The last year has been filled with events, festivities, lectures and concerts at St. Pauls. Some of the highlights include church service music that was composed by Dr. William Bradley Roberts of the Virginia Theological Seminary for the bicentennial. Another fun-filled anniversary event was the showing of a docu-drama of the highlights of the history of St. Pauls. In addition, the head of the United States Episcopal Church, Reverend Dr. Katharine Jefferts Schori, celebrated communion at the church on December 16, 2008, followed by a gala dinner commemorating the 200th anniversary at the Virginia Theological Seminary that evening.  In May, a time capsule was filled with mementos of life in 2009 and then buried at the church; the plan is for it to be unearthed during St. Pauls 400th anniversary year.

In June, the St. Pauls choir headed to Great Britain to sing at some of Englands most spectacular cathedrals and churches including St. Pauls Cathedral, St. James Picadilly, Bristol Cathedral and Canterbury Cathedral.

The year-long bicentennial festivities have called attention to the colorful history of the congregation and buildings that St. Pauls occupies. The Reverend Oran Warder, who has been the rector of St. Pauls since December 1999, said that he feels blessed to be part of this wonderful congregation at this particular time in its history as we celebrate 200 years of ministry.  Over the course of those 200 years, the congregation has seen times of difficulty and struggle as well as times of prosperity and peace and through it all has remained faithful to the work of mission.

Warder went on to talk about the vision and commitment of the parishioners of St. Pauls and said, Part of the DNA of the congregation was set very early.  The congregation is always reaching out and paying attention to the needs of the world around it and then bringing people, other congregations and resources together to try to address those needs.  The result of these efforts have been the founding of the Virginia Theological Seminary, the founding of the Alexandria Hospital, and more recently NOVAM, the Northern Virginia AIDS ministry.  We have been richly blessed with a wonderful legacy of faith, and given that legacy, a bright future as we enter the next 200 years and build on the solid and sure foundation of those who have gone before.

His predecessor, Reverend Geoffrey M. St. J. Hoare, who served at St. Pauls from 1988-1999 and is now the rector of All Saints in Atlanta, echoed Warders comments.

I enjoyed 11 happy years at St. Pauls, Hoare said. It was a joy to be associated with a community that has been so instrumental in holding up and responding to human needs in Alexandria for what is now 200 years.

The Suffragan Bishop of Virginia, the Right Reverend David Colin Jones, showed his appreciation for the two-century-old institution as well.

St. Pauls Church in Alexandria has a rich heritage having provided excellent leadership and service to its community and the Diocese of Virginia for generations, Jones said.  When anything significant is happening in Alexandria or in the diocese, someone from St. Pauls is usually at the table.  I appreciate St. Pauls steadfast commitment to that mission.

The Ret. Rev. Peter James Lee, who recently stepped down as Bishop of Virginia, also praised the mission work of St. Pauls.

During my 25 years as a Virginia bishop, St. Pauls Church continued its vibrant combination of effective outreach in Alexandria and overseas, inspiring worship and nourishing congregational life, Lee said. Its 200 years have been a gift to Alexandria and all Virginia.

In looking back over the 200-year history of the church, Warder was happy to share some of his favorite stories from the annals of St. Pauls, including some anecdotes from when the church was consecrated in 1810.

Virginias Bishop Madison died and the post of bishop remained open for two years, Warder said. So Bishop Thomas Claggett, a man of gigantic stature and with a loud voice to match, came down from Maryland to consecrate St. Pauls and Christ Church. He  allowed himself to be governed in some manners by precedents imported from England, which meant that he was much more of a high church bishop consecrating two low churches while wearing a mitre and using more of a high church liturgy.  His mitre and long flowing robes produced a sensation in the streets of Alexandria.

Warder continued, It is said that when he entered the little church of St. Pauls, which was completely filled with people, and he uttered the words Lift up your heads, O ye gates; even lift them up, ye everlasting doors; and the King of glory shall come in, he literally struck terror into the minds of some of the silent, and he stupefied others in the congregation because they had never seen anything or heard anyone like this before.  Accounts say that one young woman even fainted when she heard Bishop Claggett. She had to be carried out of the church to be revived.

The parishioners of St. Pauls, as well as many local residents, are clearly proud of the magnificent architecture of the church, which was designed by Benjamin Latrobe. Latrobe was selected to design the church in 1817.  He is best known for having completed the U.S. Capitol building, including designing Statuary Hall and the former Supreme Court room, and restoring the White House after it was burned in 1812. Latrobe is said to have had the London church of St. James Picadilly in mind when he designed St. Pauls.

During the Civil War, Alexandria fell almost immediately to the Union Army and many traditional southern families who were part of the congregation of St. Pauls had strong feelings about the war.

Emotions were raw, according to Warder. When the priest at the time, Reverend K. J. Stewart, refused to say a prayer for President Abraham Lincoln, the Union troops in the congregation monitoring the minister arrested him. One woman in the balcony is said to have thrown her hymnal down on the Union troops below as they took Stewart out of the church.  Warder noted that On that same day, a warning was issued to females and others, threatening arrest for offensive remarks and demonstrations prompted, no doubt, by the actions of several St. Pauls ladies.

The 200th birthday of St. Pauls winds down as the Episcopal Church and Anglican communion as a whole continue to go through unsettling times ecclesiastically. Just recently, Pope Benedict XVI reached out to Episcopal and Anglican priests and churches worldwide that are struggling with some of the issues facing the church. Still, Warder is confident of the longevity of St. Pauls and the good intentions of the Pope.

In the grand scheme of things, we are all striving for the same Christian goal, each from a faithful and consistent framework, he said. Anglicans always strive to seek the truth through an engagement of scripture, informed by Church tradition, and utilizing our God-given ability to reason. This is a dynamic process,
involves the continuing work of Gods Spirit among us.  This process has led us, at our best, to always err on the side of a generous and inclusive orthodoxy and the ability to hold very diverse opinions in tension.  For some, the tensions have become too great.

But Warder was quick to optimistically add, St. Pauls is definitely going to be here for the future.  I know that because we plan for someone here at St. Pauls Church to open our time capsule in 2209 when they celebrate the 400th anniversary.