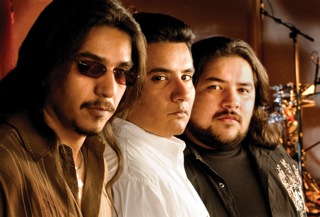 Sir Isaac Newton is attributed with the phrase, What goes up must come down. While the 17th century mathematician was describing the magnetic planetary force that led to an apple falling to the ground, his words could have easily been describing the career trajectory of most mainstream popular music acts.

Jojo Garza, middle brother in the Texas trio known as Los Lonely Boys (performing two acoustic shows at the Birchmere October 5 and 6) is well aware of gravitys role in his bands situation.  After scoring a top five hit in 2004 with their bluesy jam Heaven, earning that years Grammy for best pop performance with vocals, the Boys have released two follow-up albums that have been met with lukewarm receptions from both critics and audiences alike.

Look, I know that [fame] doesnt come and stay, explains Garza during a recent telephone interview from his San Angelo home. It comes and goes. To have mainstream success, you have to work at it, and some bands, like the Black Eyed Peas, are fortunate in that way. But to me, thats not what being an artist is about. You want to make music that will stand the test of time.

Being on the radio is cool, but its not as important as it used to be, he said.

Ironically, Los Lonely Boys will be releasing an EP entitled 1969 on October 13 that focuses on a period of time when radio play was critical to a bands lasting success. Yet Jojo sees a vast difference between todays rock music and the content of songs like Carlos Santanas Evil Ways, The Beatles She Came In Through the Bathroom Window and The Doors Roadhouse Blues all of which are covered on 1969 and will likely be performed at the bands upcoming live performances.

Those songs have such heart, such passion, such love, the 29-year-old reflects on music released a decade before he was born. [People] just dont use their heart as much as they should in mainstream music today. I always like to say, You cant get air from a plastic plant. It might look like a tree and stand like a tree, but its not alive. Its plastic. Its something you cant live off of.

Music is the only life that Jojo, along with brothers Enrique Jr., 31, and Ringo 28, have ever known. The boys grew up in the shadow of their father Enrique Garza Sr., who had his own group, The Falcones, with his brothers. They played the Texas conjunto circuit in the 70s and 80s. Jojos first memories of performing live are of backing up his father at the age of 8.  Even their bands name can be attributed to a song Enrique wrote for his sons: Im Just a Lonely Boy.

My dads a good man and a great father. He wanted us to [perform]. It was only natural, as it is with my children today, beams the proud father of four, ranging in age from 1 to 11 years old.  Im surrounded by little musicians!

While Jojo is happy with his childhood, hes also gained a healthy dose of perspective in how difficult life on the road can be and is making sure the same fate doesnt happen with this second Garza generation.

Look, my dad did the best he could, but we had to move around a lot [looking for work], he says. Its important to me and my brothers that we stabilize our family. Education was not something that we had, but Im making sure its a part of their life, until they get to a certain age and can make their own decisions A weak soul would be eaten by the road I want my kids to be ready before they make that choice.

Over the last five years, Los Lonely Boys have been cutting a musical path of their own choosing. Over that time, their vibe has become more spiritual in nature, with many songs on Sacred (2006) and Forgiven (2008) bordering on gospel a fact that Jojo isnt ashamed of one bit despite the critics.

People always ask us, do we consider ourselves Americans, Mexicans, Texicans? he said. To Los Lonely Boys, it really doesnt matter. We are human beings. We dont care to separate ourselves from other spirits. While were proud to be Mexican-American, were even more proud to be human beings, sharing in Gods peace and love If we can bring more meaning into peoples lives with our music, then weve succeeded.