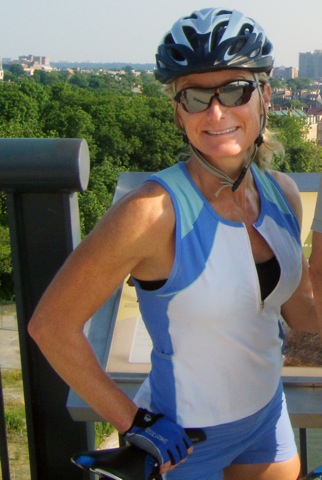 When Brooke Curran picked up running at age 30 it was just a healthy hobby. After her first marathon, the 2002 Marine Corps Marathon, it became her passion. Now, its a mission to benefit Alexandria.

Since May, the mother of three has focused her energy on training and fundraising for RunningBrooke, her charitable campaign to marathon on all seven continents, in all 50 states and as of this month compete in one of the grueling 26.2-mile races every month.

Beyond the personal satisfaction she gets from running, though, Curran is marathoning to raise money for Alexandrias social support programs in partnership with the Alexandria Community Trust.

Were the ones who write the checks, but the money is hers to designate, said ACT Executive Director John Porter. We dont have another fund similar to the one Brooke is doing with a similar type of bent.

Theres quite a dedication to do what shes doing.

Im paying my own way for everything, Curran said. Everything I collect gets donated toward the city.

These days, Curran runs about 75 to 80 miles each week to stay in form, in addition to the frequent flier mileage shes logged already traveling to race in places as remote as Easter Island in the middle of the Pacific Ocean. Those miles are sure to increase as she is already planning trips to London in April, Australia in July and Antarctica in March 2011.

And it all started as an attempt to gain some alone time.

I just had to get out of the house, said Curran, who never considered herself a serious runner. I had to do something for me, something for myself. So, running became my thing.

When a friend of a friend dropped out of the 2002 Marine Corps Marathon, Curran jumped at the chance to take the spot.

Running a marathon was on my life list of things to do, she said. Nearly a dozen marathons later, its a way of life that the whole family is able to support.

I think, perhaps, they think Im a little bit crazy, Curran said of her three girls, ages 16, 15 and 11. Sometimes Im sure they wish I were around to feed them breakfast or perhaps that I was around more on the weekends when I do my long runs, but generally they think its pretty neat, she said in the middle of her rounds for the soccer carpool and with no cries of disagreement from her children in the car.

The transition from running every day for exercise to training for marathons came pretty naturally, too.

After resolving to run a marathon on every continent and in every state, she began to think that was too easy.

To that, she added the additional goal of running all five major world marathons Boston, New York, Chicago, London and Berlin. With only London remaining, she ratcheted up the difficulty yet again with holding herself to a marathon a month until shes done.

Despite the daunting and draining running schedule, Curran doesnt seem to dwell on the toll it takes or how long it takes to recover.

I expect tired muscles running a marathon every month, she said. Im pretty good after about four days Ill take about four days off, do some yoga, some cycling and some swimming.

Next year, once shes run circles around Big Ben in London, Ayers Rock in the Australian Outback and countless trails in between, she will set her sights about as far south as you can go.

If plans hold up and weather permits, in March 2011 Curran will be taking an ice-breaker from Tierra del Fuego, Argentina, across the Drake Passage to Antarctica for one of the worlds most extreme marathons, if not the most remote.

I think it will be rocks, mud, snow, ice a little bit of everything, Curran speculated. For sure, its not going to be a fast one.

I cant believe Im going to go to Antarctica, I really cant, she said. Im a little scared about going across the Drake Passage, but other people have done it before me so I guess Ill survive.

And run. A marathon. In Antarctica. For Alexandria.