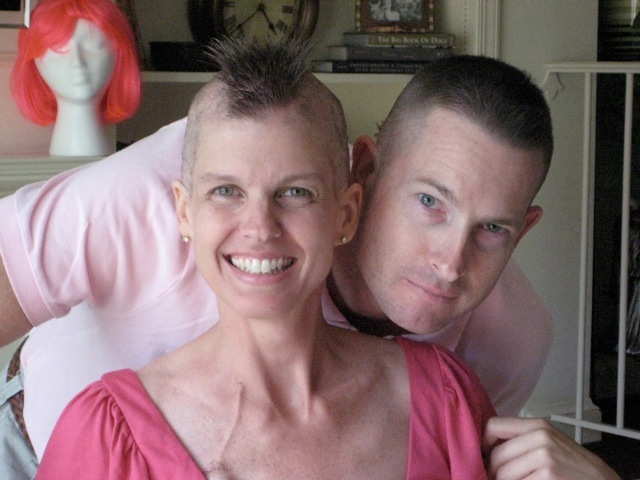 The statistics are staggering: More than 200,000 women across the country are diagnosed with breast cancer each year and approximately 40,000 die annually from the disease. When Alexandria resident Cindy Readal discovered a lump in her breast in May of 2008, she became one of those statistics.

My doctor said that he was 99 percent certain it was benign, said Readal, who was 38 years old at the time. An hour later I was hearing, This is bad. Very bad.

Still, it took some time for the severity of the situation to register with Readal.

I remember thinking What could be so bad? Im only 38 years old, and the technician never actually said the word cancer. But before the end of the day, Readal would have a mammogram, sonogram and biopsy and learn that she had Stage II breast cancer.

I was pretty stunned, Readal said. And the doctors thought right away that I may have the breast cancer gene mutation because of my age so the tests and treatments began immediately.

Readal underwent chemothearpy treatments from June through September, while at the same time awaiting the results of the genetic testing, a procedure that takes about six weeks to process.

Both my grandmother and aunt on my dads side died in their late 30s and early 40s from breast cancer, Readal said. But since everyone always tells you that the gene is passed down from your moms side, no one ever paid much attention. Now I know differently.

Readals tests did indeed show that she inherited the BRCA1 gene, which, according to the Mayo Clinic, gives carriers a 40 to 85 percent lifetime risk of developing breast cancer and increases the risk of ovarian cancer to levels 30 to 70 percent higher than women who do not carry the gene.

Once I found this out, my whole course of treatment was decided, explained Readal. Knowing I already had cancer as well as the BRCA mutation, the only choice was to do the bilateral mastectomy.

Readal had her mastectomy in October, followed by a complete hysterectomy in January 2009. What she refers to as her foob surgery (faux + boobs) was done in March, with follow-up surgery in June for more breast reconstruction.

The good news for Readal and others like her is that early detection and aggressive therapies have given many more patients a chance to survive what is the second leading cause of cancer death for women behind lung cancer.

Getting a basic mammogram is still key to early detection, said Dr. David Weintritt, a breast cancer specialist and surgeon who operates out of both Inova Mount Vernon and Alexandria hospitals. With digital mammograms and computer assisted diagnosis, mammograms provide better detection rates and are still relatively inexpensive to perform.

With the citys annual Walk to Fight Breast Cancer scheduled to take place Saturday, the focus this weekend will be on the continued efforts to provide these crucial screenings to the uninsured and underinsured residents of Alexandria.

We expect to raise $100,000 this year, said Angela Johnson, the walk coordinator of the Alexandria Office on Women. All of the proceeds benefit the Alexandria Breast Cancer Walk Fund at Inova Alexandria Hospital, which provides mammograms to women in financial need.

More than 5,000 people are expected to participate in the walk, each with a story of courage perhaps their own, perhaps of a loved one behind the pink ribbon most will be wearing.

Since the walk began in 1994, nearly 5,000 women have been able to get mammograms through the fund, Johnson said. This year alone, 211 have already been provided screenings for breast cancer.

While the chance of a woman being diagnosed with invasive breast cancer is one in eight and the chance of it killing her one in 35, what is missing in those numbers from the American Cancer Society is the millions of lives that have been saved through medical advances in early detection, treatment and preemptive care through genetic testing.

The intent of the fund is to not only do imaging, but if the imaging generates a finding that would then lead to a biopsy as the next step, it will cover that as well, explained Weintritt. It wont cover definitive surgery, chemotherapy, radiation it wont cover any of that. But it will cover the imaging and diagnostics necessary to get to the point to know exactly what is going on.

But there are resources available for those who are uninsured if additional treatment is necessary.

There is help for patients to get access to proper care, Weintritt said. Medicaid is one option, or companies will donate equipment or drugs. Its a case-by-case basis at that point but fortunately there are resources for those who have cancer.

Weintritt is quick to point out that, while rare, men are also at risk for developing breast cancer, with 2,000 new cases reported each year.

Its just as important for men to be aware of their genetic history as women, Weintritt said. In addition to breast cancer, men who carry the gene are at an increased risk of prostate cancer as well.

The Prevent Cancer Foundation, founded by Alexandria resident Carolyn Aldige and headquartered here, has been committed to promoting cancer education and early detection since its inception in 1985 and has raised more than $106 million in support of its mission, which includes community outreach efforts like the Mobil Mammography program, known as the Mammovan, and the Celebremos la Vida! program that focuses on treatment for the Hispanic community.

We fund the screening of both breast and cervical cancers, said Karen Peterson, vice president of programs for the foundation. We dont run the sites but partner with existing community sites to provide both the screenings and follow-up care.

In partnership with the Howard University Cancer Center, Prevent Cancer has just released the Breast Health Education for Young Women guide and educational DVD, designed to promote breast health awareness for young women, particularly women of color. Intended for use in urban school and community groups, the facilitators guide is available as a free download through the foundations website, as is a guide to preventable cancers. (www.preventcancer.org)

While there is no guarantee that you wont develop breast cancer, research does indicate that you can lower your risk through diet and exercise.

According to the Prevent Cancer website, among the easiest things to control are what you eat and drink and how active you are.

Its important for everyone to stay healthy and have an awareness of what their risks may be, Weintritt said. Knowing your family history and whether you are at an increased risk is a start and those patients need to know that they may be eligible for additional testing.

For Readal, it helped to have a positive attitude as well as husband with a sense of humor to get her through everything from losing her hair to the realization that she will never have children.

What can I say, laughed Readal. Larrys a funny guy and we did actually try to make this whole ordeal fun.

As their neighbors in Old Town can attest, Larry, a Captain in the U.S. Navy, is indeed a funny guy and played a key role in keeping Readals spirits up, including throwing her a Bon Voyage Boobies party the night before her mastectomy and a Shave Your Head party when she began losing her hair.

Having somebody like Larry, good neighbors and a good support system that cant be replaced, said Weintritt, who did not treat Cindy but happens to be a neighbor of the Readals. The patients I worry about most are the ones who have no social support at all nobody to turn to.

Larry was skeptical at first but agrees that their approach to handling Cindys battle made a difference.
I always thought it was about medicine and science, he said. But after going through what we did, I can see absolutely that having a positive attitude really makes a difference.

But Cindy was quick to add, Its not to say I didnt have my pity parties, but I was de
termined not to drown myself in woe is me.

Its been 16 months since Readal was first diagnosed with breast cancer, and today she is as vibrant as ever and nearly back to her pre-cancer routine of walking three miles a day, seven days a week, to stay in shape.

I was told to expect to write off a year of my life in dealing with this, Readal said, and thats exactly what happened.

And while Larry gently teases her, saying, She was less of a wimp through this than I thought she would be, there is no doubt about his admiration for the strength and courage his wife has shown throughout this challenging time.

No question about it, he said proudly. She is my hero.