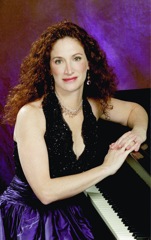 Its not often a musician sells out their debut performance at Carnegie Hall, but Robin Spielberg did just that back in 1997, and now, 15 award-winning CDs later, the contemporary  pianist is kicking off her latest concert tour Saturday night at the Lyceum.

Im looking forward to kicking off the year in Alexandria, said Spielberg, who added with a laugh that this is the first show where tickets were sold because of an announcement on Twitter.
A composer as well as performer, Spielberg began taking formal lessons at the age of 7 while growing up in New Jersey, but she remembers playing long before that.

Ive always been playing piano, said Spielberg, who inherited the music gene from her fathers side of the family. My paternal grandfather played for [Arturo] Tocannini in the NBC symphony orchestra and his brother was the concertmaster. Growing up, there was a lot of music around us all the time.

The internationally acclaimed artist is modest about what most would call musical genius, instead insisting that everyone possesses some form of musical talent.
We all are wired for music I really believe that, Spielberg said.  We just all acquire it in a different way.

Memorization came especially easy to Spielberg, which came in handy when she first started out in the smoke-filled piano rooms of New York.

My memory for music certainly served me well when I was in my 20s, walking around with 700 tunes in my head, said the engaging entertainer. You name it, I could play it show tunes, pops music. That doesnt make me better than anyone else, just different.

But composing a melody is far more challenging to most musicians than merely performing one, yet for a long time Spielberg never realized that this was another one of her unique talents.
My skills help me craft a tune and bring a good melody out of a song, she said. My lifes work has been about setting my life to a soundtrack. I never had any idea of where it might lead or that it was anything special. I always thought everyone had a soundtrack going on in their head all the time.

The busy mother of an 11-year-old daughter, Spielberg is always working on a project, and her latest venture is a book that she hopes will be completed sometime next year.

Its a book about playing piano, she said with a laugh. We should write about what we know, right?

Known for telling stories about her songs during her concerts, Spielberg describes her book as My adventures in pianoland. These are stories that inspired my music and will hopefully help audiences connect more to my performances.

While Spielbergs career has led to sold-out performances around the world, her most satisfying work comes from her efforts as the celebrity spokesperson for the American Music Therapy Association, a cause that is especially important to her.

My daughter Valerie was born prematurely at 23 weeks and weighed only 1 pound, Spielberg said as she recalled that difficult time in her life. Her chances of survival were slim and it was a real rollercoaster ride for us in the intensive care unit.

But it was out of that experience with her daughter, who is now healthy and doing well, that Spielberg was motivated to learn about and get involved with the AMTA.

It wasnt until I experienced that life and death situation in the hospital that I saw that there was a scientific and very real medical link between music and wellness, she said. I always knew that music made me feel better, but this made me want to explore it more.

Now, in addition to her concerts, Spielberg will visit schools or hospitals while she is on tour to talk about the healing benefits of music therapy, and she donates a portion of the proceeds of each of her Beautiful Dreamer CDs recorded at the time her daughter was born to music therapy research.

I really had an epiphany a number of years ago, Spielberg said as she recalled her years in the entertainment industry. The most amazing things that have happened in my career are completely below the radar.

Spielberg was especially touched by an experience she had while performing at a Missouri nursing home.

It was one of those sad places filled with forgotten people, she said. I played for about 40 minutes and had no idea if I was having any impact. But as I was leaving feeling pretty bummed actually a nurse came up to me and pointed out a man in a wheelchair who had been singing along to Moon River. He hadnt spoken a word in six months, but apparently this was his wedding song. His family thanked me for bringing him back to them, if only for a short while.

That experience moved Spielberg and keeps her more committed than ever to using music to touch people in any way she can.

It made me realize why Im here, she said reflecting back on that day. While its lovely to play at Carnegie Hall and sell out the records, it was making that kind of connection that made me realize that the best experiences in any life are often under the radar.

Now living in rural Pennsylvania, where we dont even have a stoplight, Spielberg is grateful for the experiences that her music has given her over the years.

A lot of what I do is completely unglamorous, Spielberg said with a laugh. Its not just the traveling and showing up in a pretty gown to play the piano. Its all the other parts of this wonderful journey that make it worthwhile.

Robin Spielberg will be performing Saturday night at 8 p.m. at the Lyceum, 201 S. Washington St. Tickets are $16 and will be available at the door.