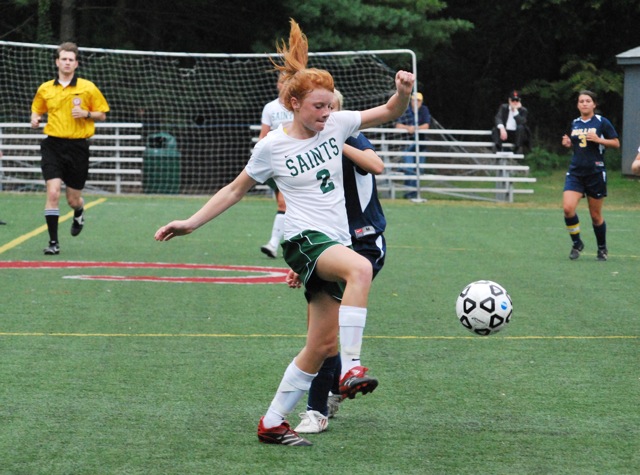 When Bullis striker Samira Jackson collected the ball, turned and raced toward the St. Stephens/St. Agnes goal with a minute and a half left of overtime Tuesday, it appeared as if the Saints previous 88 minutes of gritty defense would be spurned aside by a crushing breakaway goal.

But, with Saints goalie Claire Dormer charging and sweeper Emma Hedley chasing Jackson, her right-footed shot across the goal went just wide of the bottom left corner, allowing the Saints a sigh of relief and the Bulldogs a sigh of frustration befitting of the 0-0 draw at Kelleher Field.

I had a bit of a heart attack there but I was confident that my goalkeeper, Claire Dormer, would come on strong, said St. Stephens coach Karen Ruberg. That breakaway that was close. She had that shot thats why [Jackson] is so lethal, shes deceptive in how quick she is.

Watching the play unfold from her own goal, Dormers sole thought at the time was as simple as it gets for a goalkeeper.

Dont get scored on, Dormer said of her reaction to Jacksons overtime breakaway.
We worked too hard to let that get in, Dormer said. Emma Hedley, our sweeper, does an awesome job back there and she was able to cut off the angle enough so it didnt go in.

The Bulldogs (6-1-1) rode a six-game winning streak into Alexandria and emerged as the dominant side in the first half. Barely five minutes into the game it was Jackson who provided Dormers first test, a strong curling shot to the bottom right corner that the Saints keeper handled capably.
Bullis managed another five shots on goal in the opening period, forcing some difficult, ranging saves from Dormer, but failed to get on the board. Dormer finished the game with 12 saves for the clean sheet.

She kept us in it for sure, Ruberg said. She usually comes up strong.

The Saints, meanwhile, struggled to find their rhythm in the attacking half of the field restricted to a great extent by the Bulldogs offensive push until the second half.

About 14 minutes into the period, the Saints gave Bullis goalkeeper Dana Daniels her first test of the game, forcing Daniels to charge a rushing Meghan Moloney who had been sent through by center midfielder Liz Cornwell.

Despite its midfield being driven back to defend, St. Stephens began to turn the momentum in the last 10 minutes and got their best chance with just under six minutes to play when Paige Patterson headed Cornwells free kick on goal an attempt Daniels bobbled slightly but didnt let slip.
The Saints (4-3-1) finished with six shots on goal all in the second half and 11 total.

Theyre definitely a solid, solid team, Bullis coach Celeste Melanson said. Nothing but respect for them. We knew coming in it was going to be a good game.

They know our girls really well so they were able to shut down our defense and they know our sweeper.

Dormer, clearly the busier of the two goalkeepers, had a dangerous Bullis strike-force to keep in check, primarily Jackson and substitute attacker Jordan Sullivan.

Theyre fast, theyre really, really fast but theyre not that technically good, Dormer said. A lot of the balls I had, there were some that were hard but a lot of them were close to me. They were hard-hit balls but they werent to the corners, obviously.

Ruberg said she talked to her team before the game about not letting up defensively against a potent Bulldog attack, one that had scored nine goals in its last two outings and finished with 17 shots (12 on goal) Tuesday afternoon.

Their attack definitely kept us on our heels initially, Ruberg said. Theyre strong across the board so we had to be really quick on transition. Luckily our girls were getting back and recovering quickly.

The Saints play again Friday when they host Maret at 4:15 p.m.