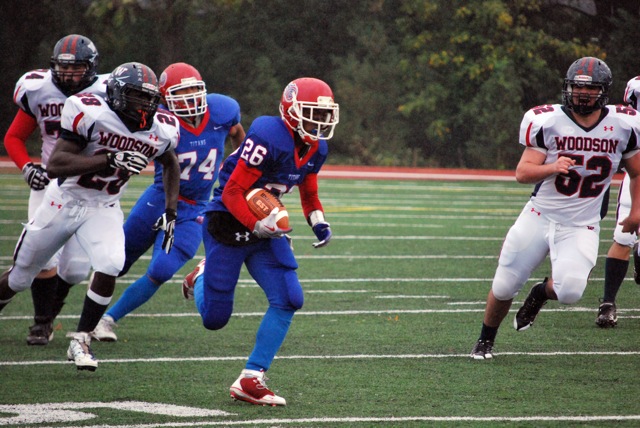 It was the latter that again hampered the Titans best laid plans, allowing the Cavaliers defense to key in on the running game and effectively shut down T.C.s offense in Woodsons 20-6 win at Alexandrias Parker-Gray Memorial Stadium.

Weve struggled at [quarterback] all year, said T.C. head coach Dennis Randolph. In a big game youve got to have someone who can take control of the game and do certain things and we didnt do that and thats why we lost.

T.C. fell to 3-4 with the loss, one week after a dominating 31-7 win at Annandale leveled their record.

The Cavaliers move to 6-1 with the win, their best start in five years.

Largely because of their own stiff defense, though, the Titans remained in the contest into the fourth quarter trailing 12-6.

In a game that degenerated into a soggy battle for field position, the hosts were poised to turn the tide after recovering a fourth Woodson fumble deep in the Cavalier territory. Facing second-and-five at the 12-yard line with just over seven minutes left in the game, the Titans were as close as they had come to scoring since Cortez Taylors 61-yard touchdown run on the second play from scrimmage.

There, however, a botched handoff between quarterback Doug Murphy and running back Charles Garner, the Titans third turnover, spelled the end for an offense that struggled to move the ball the entire second half.

Both teams finished with four turnovers apiece and combined for 19 punts, but it was the Titans ineffectiveness on offense that proved decisive, picking up just two first downs none in the second half.

After Taylors first-possession score, the longest T.C. drive went a total of 19 yards.

We just didnt get the job done on offense, Randolph said. We went down there the first series and took it right in, it looked like we were off to the races but they started doing some things and we just didnt move the ball.

Randolphs defense, facing one of the regions best quarterbacks in Woodson signal-caller Connor Reilly, put in yeomans work and limited the Cavaliers to five first downs before the Titans red-zone fumble.

We talked a lot about [Reilly] before the game, but he wasnt as good as they said he was, said T.C. linebacker Chelo Abbe. They were running the same stuff the whole game counter, quick option, quick outs but we were on the field too much because our offense was going three-and-out a lot.

Dealing with the Titans defense and the rain, Reilly had his worst outing of the year. The senior finished 9-of-20 for 52 yards, with no touchdowns or interceptions.

Watching them play Annandale last week, we were definitely aware of how fast they break on the ball and their ability to pick off the ball, said Woodson head coach Trey Taylor.

Sophomore running back Jonathan Stokes shouldered the brunt of the load for the Cavaliers in what became a run-heavy offense, carrying the ball 21 times for 121 yards and a touchdown.

Cortez Taylor, meanwhile, led the Titans with 79 yards on 12 carries but had to leave the game in the third quarter with what he said was a shoulder sprain.

Immediately after the game, Randolph was unsure of how the injury would play out in the weeks to come. T.C. hosts rival West Potomac this Saturday with kickoff set for 3 p.m.

With a spot in the Northern Region tournament up for grabs last Thursday in the first round of the Patriot District playoffs, the T.C. Williams field hockey team held off West Potomac for a crucial 2-0 win. Anjuli DeWaker put in both goals to lead the host Titans to victory over the rival Wolverines.

The Titans moved to 9-8 with the win and advanced to the semifinals against South County last Tuesday in Annandale where they lost 3-1. The matchups for the first round of the regional tournament were not available at press time, but the Titans will be on the road for their regional tournament opener this Tuesday.