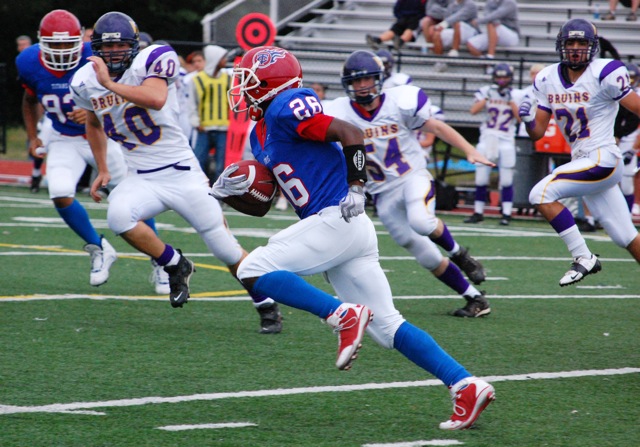 Nine days after up-ending perennial contender Oakton at Parker-Gray Memorial Stadium, the T.C. Williams football team had to stomach some markedly different feelings in the wake of Saturdays 35-26 home loss to Lake Braddock.

In a contest that seemed to have a lot of everything points, turnovers and big plays for both teams the end equation didnt work out in the Titans favor.

Despite intercepting Lake Braddock quarterback Michael Nebrich three times, holding the Bruins to just one offensive touchdown after the first quarter and forcing the visitors to punt eight times in the second half, T.C. could not overcome a slew of their own second-half miscues.

Its frustrating to lose, period, said T.C. head coach Dennis Randolph. Overall we just didnt play well enough to win and they did a very good job stopping us, bottling us up and we didnt do a very good job taking advantage of the things that were available to us.

Always competitive on their home turf, the Titans, coming off of two straight wins, presented a clear threat to the Bruins.

They hung around last week with Oakton and beat them at the end. That was my fear today.

The Bruins did their best to distance themselves from the hosts early, going up 8-0 after their opening drive. Paced both in the air and on the ground by Nebrich, Lake Braddock put together a 77-yard scoring drive that Nebrich punctuated with touchdown on a quarterback draw at the 1-yard line.
Lake Braddock extended its lead to 15-0 with 1:18 left in the first quarter when Nebrich connected with wide receiver Brandon Johnson on a deep out to the far side of the end zone for a 10-yard touchdown pass.

Indeed, for the first quarter and beyond, Nebrich proved to be the game-breaker. The junior not only went 7-of-14 with 134 passing yards in the first half, he also ran for 91 yards on 12 carries, serving as his teams primary running threat.

Nebrich finished the game with 167 yards passing and 141 yards rushing for Lake Braddock, a performance that, while dampened in a sloppy second half, was more than respectable.

He managed the game very well, he threw the ball very well and he ran excellent, Randolph said of Nebrich. Hes a good football player and really kept us off balance.

Without an effective running game, though, the Bruins were able to pounce on the Titans passing attack in the second half, picking off Bray three times in the third quarter and his backup Doug Murphy twice in the fourth. Bruins cornerback Thomas Stickford returned two of them for touchdowns, including the game-winning score.

Add five interceptions, a muffed punt early in the third quarter that led to Nebrichs second rushing touchdown of the game, and the Titans two second-half touchdowns were not enough to turn their pre-game momentum into a three-game winning streak.

Aside from the five interceptions, T.C. had its most prolific passing game of the year, with Bray finishing 15-of-27 for 140 yards and a touchdown and Murphy going 5-of-20 for 107 yards and two touchdowns.

Yet those numbers provide little consolation for Randolph or the Titans who seem to present a noticeably different face each week. The Titans, who had until Saturday relied heavily on their running game, found tough sledding against the Bruins with lead running backs Cortez Taylor and Robert Carter combining for 3 yards rushing.

Were struggling offensively because were trying to find our identity, Randolph said. The situation at quarterback is not settled and today didnt help that a bit.

Now facing the meat of their Patriot District schedule, the Titans are well aware that each game is bound to be a stern test.