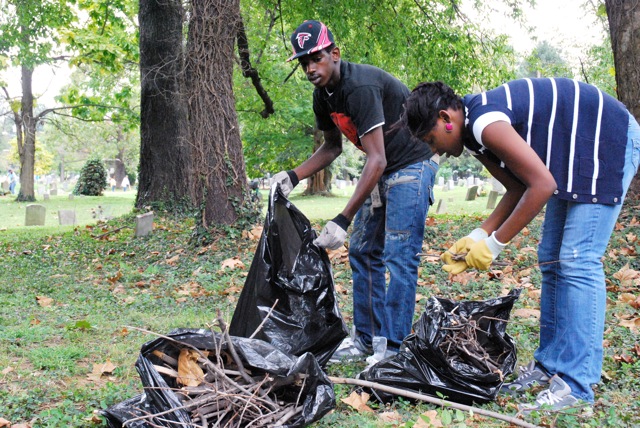 Thanks to a concerned cyclist and a couple dozen volunteers, Old Towns Fredrick Douglass Cemetery now has a fresher lease on life.

Last Thursday and Friday, a class of T.C. Williams students, inmates from the Alexandria Detention Center and a handful of community members pitched in via Volunteer Alexandria to spruce up one of the citys historic African American cemeteries that had fallen on some hard times.

A prime example of early African American burial traditions tombstones all facing east to the sunrise the site, part of the Wilkes Street cemetery complex, received a new gravel path courtesy of the Sheriffs Department on Thursday, according to Volunteer Alexandrias Courtney Bishop.

The graves face east because it tied your life with the natural life in the universe, said Jaclyn Harkey, teacher of T.C. Williams African American Experience class. Thats why the bodies faced east, so that the sun would rise up over them and then set behind them in the west, like the natural cycle of the world.

The T.C. students and others lending a hand Friday were clearing out brush and weeds from the cemetery, which was also freshly mown.
For the group from T.C. Williams, the trip was at once a chance to connect with a piece of history and give back to the community.

It means a lot, just for the history itself, said T.C. Williams student Rodney Lewis, 17. You never know, some of the people that are here could probably be some of my family members.

As the only black history high school class in Northern Virginia, Harkey said, visiting the 19th-century cemetery was an opportunity to get a firsthand look at the history of local African American culture.

The kids, they never knew this existed, Harkey said. They live right here in Alexandria and they had no idea.

As they were walking though, even looking at the tombstones they were amazed at how old they were and they were able to piece together, If this guy died then, then he was probably enslaved, and tied the history of it all together.