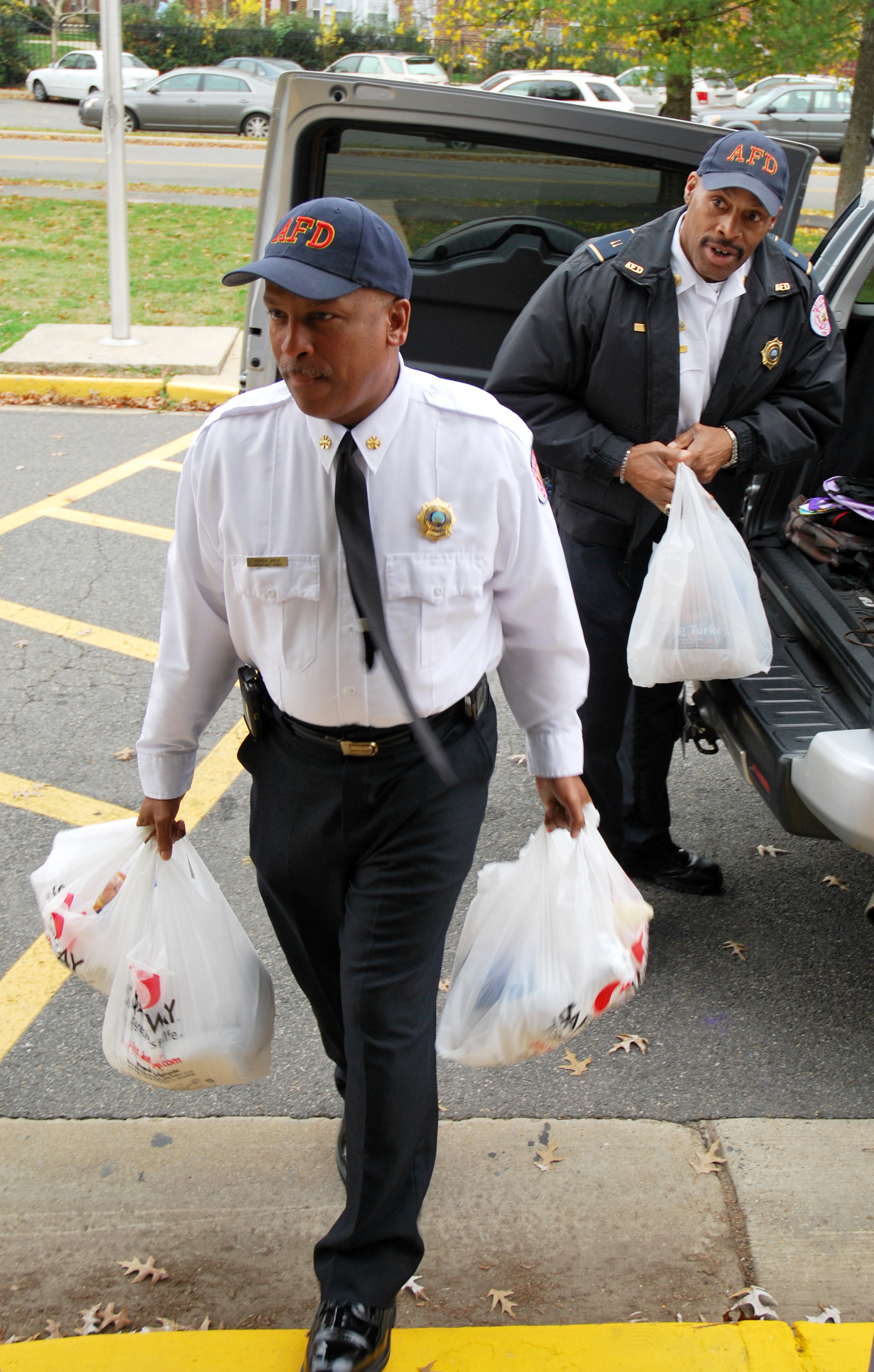 Preparing for Thursday’s main course just got a little easier for a handful of Alexandria families.

While the Alexandria Fire Department cannot do much to cut down the cooking time for a 12-pound turkey, it does what it can to make sure at least some ovens are occupied come Thanksgiving as evidenced by Monday morning’s turkey drive at Cora Kelly school.

Partnering with the Fairfax County Fire and Rescue Department, the city’s fire service donated turkeys to seven families in the Arlandria school community and also, through its own annual coat drive which started about three weeks ago, provided the same kids with a new winter jacket.

“This is the kick-off for our Christmas toy drive for this community,” said AFD Capt. Thurston McClain. “For the community in Alexandria, we start right here at Cora Kelly.”

After joshing about NFL allegiances with the kids, who ranged from kindergarten to fifth grade   drawing several heated cheers of protest from young Redskins fans McClain, along with Capt. Luis Santano and Assistant Chief Andrew Snead, helped the kids pick out their new cold-weather gear before passing out the turkeys.

The annual turkey drive, just one example, has been going on for about four or five years in conjunction with Fairfax County’s efforts, which McClain said are quite extensive.

Outside of the schools, the fire department also donates turkeys to families at the YMCA, Santano said.

Giving during the holiday season takes on added meaning, McClain said, and the fire department helps facilitate the process.

“The fire service is the vehicle we use to extend into the community to have a bigger impact,” Thurston said. “We love to do it.”

Cora Kelly Principal Brandon Davis attested to the meaning of the charitable effort.

“Some of the kids here may not have a winter coat and have to come to school in a sweatshirt,” he said. “With this, at least six or eight kids get to stay warm through the season.”

When, after talking about Thanksgiving history, Snead asked the children what piece of turkey was their favorite, he didn’t get quite the response he was looking for.

“The ham I mean the leg,” said one second-grader. Thighs and wishbones aside, all of the students agreed that giving during the holidays was a good thing.

McClain said the fire department does what it can in the Cora Kelly community because it knows the need exists there and they can affect things for the better. As his students left with their new coats, Davis reflected on the influence the gifts could have with each one walking out the door.

“It definitely has a sustaining impact on these kids because it shows that there are adults out there outside of their immediate family that care and want to make a difference in their lives,” Davis said.