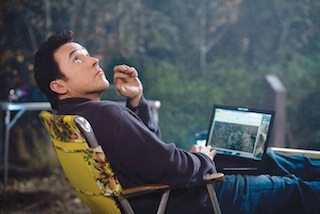 Its not so much that the Earth is destroyed, but that its done so thoroughly. 2012, the mother of all disaster movies (and the father and the extended family), spends half an hour on ominous setup scenes (scientists warn, strange events occur, prophets rant, and of course a family is introduced) and then unleashes two hours of cataclysmic special events hammering Earth relentlessly.

This is fun. 2012 delivers what it promises, and since no sentient being will buy a ticket expecting anything else, it will be, for its audiences, one of the most satisfactory films of the year. It even has real actors in it. Like all the best disaster movies, its funniest at its most hysterical. You think youve seen end-of-the-world movies? This one ends the world, stomps on it, grinds it up and spits it out.

It also continues a recent trend toward the wholesale destruction of famous monuments. Roland Emmerich, the director and co-writer, has been vandalizing monuments for years, as in Independence Day, The Day After Tomorrow and Godzilla. I still hold a grudge against him for that one because he provided New York with a Mayor Ebert and didnt have Godzilla step on me and squish me.

In all disaster movies, landmarks fall like dominoes. The Empire State Building is made of rubber. The Golden Gate Bridge collapses like clockwork. Big Ben ticks his last. The Eiffel Tower? Quel dommage! Memo to anyone on the National Mall: When Earths crust is shifting, dont stand within range of the Washington Monument. Chicago is often spared; we arent as iconic as Manhattan. Theres little in Los Angeles distinctive enough to be destroyed, but it all goes anyway.

Emmerich thinks on a big scale. Yes, he destroys regular stuff. It will come as little surprise (because the trailer on YouTube alone has 7,591,413 views) that the aircraft carrier John F. Kennedy rides a tsunami onto the White House. When St. Peters Basilica is destroyed, Leonardos God and Adam are split apart just where their fingers touch (the ceiling of the Sistine Chapel having been moved into St. Peters for the occasion). Then when Emmerich gets warmed up, the globes tectonic plates shift thousands of miles, water covers the planet, and a giraffe walks onboard an ark.

Also onboard are the humans chosen to survive, including all the characters who have not already been crushed, drowned or fallen into great crevices opening up in the earth. These include the heroic Jackson Curtis (John Cusack) and his estranged wife, Kate (Amanda Peet), the president (Danny Glover), his chief science adviser Adrian Helmsley (Chiwetel Ejiofor) and his chief of staff Carl Anheuser (Oliver Platt).

Many gigantic arks have been secretly constructed inside the Himalayas by the Chinese, funded by a global consortium, and theyre the only chance of the human race surviving. There are also animals on board, and maybe well-named Noah (Liam James). In theory, ark ticket-holders represent a cross-section of the globe, chosen democratically. In practice, Carl Anheuser pulls strings to benefit the rich and connected, and wants to strand desperate poor people on the dock. Im thinking, Emmerich often has a twist when he names villains, like Mayor Ebert from Godzilla. So how did this villain get his name? What does Anheuser make you think of?

Such questions pale by comparison with more alarming events. The tectonic plate shifts so violently scientists can almost see it on Google Earth. This havoc requires stupendous special effects. Emmerichs budget was $250 million. It may contain more f/x in total running time than any other film. Theyre impressive. Not always convincing, because how can the flooding of the Himalayas be made convincing, but impressive? And Emmerich gives us time to regard the effects and appreciate them, even savor them, unlike the ADD generation and its quick-cutting Baycams.

Emmerich also constructs dramatic real-scale illusions, as when an earthquake fissure splits a grocery store in half. Cusack is the hero in an elaborate sequence involving his desperate attempts to unblock a jammed hydraulic lift that threatens to sink the ark. He does a lot of heroic stuff in this film, especially for a novelist.

The bottom line is: The movie gives you your moneys worth. Is it a masterpiece? No. Is it one of the years best? No. Does Emmerich hammer it together with his elbows from parts obtained from the Used Disaster Movie Store? Yes. But is it about as good as a movie in this genre can be? Yes. No doubt it will inflame fears about our demise on Dec. 21, 2012.