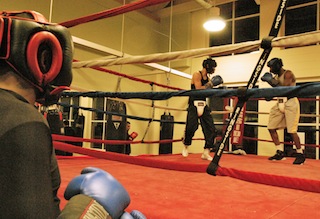 From the busy stretch of North Patrick Street, it is easy to see the flurry of activity just about every night inside the boxing room at the new Charles Houston Recreation Center.

Whats not so easy to see through the windows at 35 m.p.h. are the dogged faces of dedication dripping with sweat and the knowing sense of camaraderie they share with each other for a few hours each day.

This Saturday, that world will open up to the public for the Alexandria Boxing Clubs second Fall Brawl amateur card and the first at the new facility, which opened anew last February.

Im trying to basically bring boxing back to Alexandria, said Kay Komora, 29, one of the clubs two coaches and a key organizer of the event. We used to do shows at the old gym. We had a Fall Brawl I and it was a good turnout.

A professional fighter himself, Komora lit up at the thought of some of his kids getting to fight in front of a hometown crowd.

I feel like when I was fighting I never had an opportunity to fight at home, he said. I fought at home one time and everyone came out to see the fight. So Id love for people to see these kids its going to be good fights.

Brandon Quarles, 23, one of the clubs stalwart boxers though not quite a kid anymore has amassed an amateur record of 40 wins and 10 losses and hopes to find an opponent at 165 pounds Saturday.

When I first started, I was like 16 and the guys I was sparring with were grown men, Quarles said between turns on the speed bags and a sparring session in the ring. I used to go home with broken ribs, my head used to hurt, but Id come back.

And so he continues to come back for about three hours each evening, Monday through Saturday. The hard work shows.

Brandons been with me for about six years, Komora said. Hes coming along. Hes had his ups and downs outside thats been interfering with him inside, but now hes focused and hes ready to go to the next level.

Although time is slowly running out on his ultimate goal, boxing has taught me discipline, discipline with my life, Quarles said. My coaches, they dont only talk about boxing, they talk about life, teach me how to be a better man.

Whats kept me boxing is the motivation to make it to the Olympics, Quarles said. Im getting too old so I might go pro. Right now, Im trying to go to the nationals, get my name out there and hopefully get ranked. I told myself before I turn pro that I want to get ranked.

The new Houston centers Fall Brawl draws competition from Maryland, the District, and other parts of Virginia, according to organizers, and will be another opportunity to showcase one of the citys recreation gems.

The buildings director, Sheila Whiting, is noticeably anticipatory of Saturdays event.
The program is really a great, positive program for our teenagers, Whiting said. Im anxious to see how well theyve developed their skills with the younger kids as well as the teenagers.

Whiting extolled the job Komora and Porter have done with the boxing program at the facility and what its done for the participants.

The kids are excited about it, theyre excited about going, Whiting said. Its helping a lot with discipline problems kids have. The guys and the girls, its like, This is ours. Theres ownership there and thats valuable for them.

Christian Bryant, 22, is one of the newer entrants into the recreation centers familial boxing community.

Whatever Im going through, I just come to the gym, it keeps me off the street, Bryant said. Its a real positive atmosphere and thats why I come every day.

One of the younger fighters taking up the program is 16-year-old Corey Proctor, who started boxing with the Houston center group about five months ago as a positive outlet for some of his own pent-up energy.

Its just fighting in general I love boxing, Proctor said, adding that he loves watching welterweight champion Floyd Mayweather, Jr. I used to fight all the time and this is a sport where I can actually do it. Plus it keeps me tame in school its actually good for school.

Proctor fights at 119 pounds and is slated to fight this weekend against an opponent from Stafford County.

But what Komora thinks should be the biggest surprise for spectators Saturday is the lessons they can learn from fighters even younger than Proctor his 8-, 9- and 10-year-old boxers.

A lot of people have never seen little kids fight like grown people, so its going to be a shock, Komora said. Theyll be amazed that little kids can fight like Roy Jones they dont have to see big guys going at it, they can have kids showing them boxing as an art.