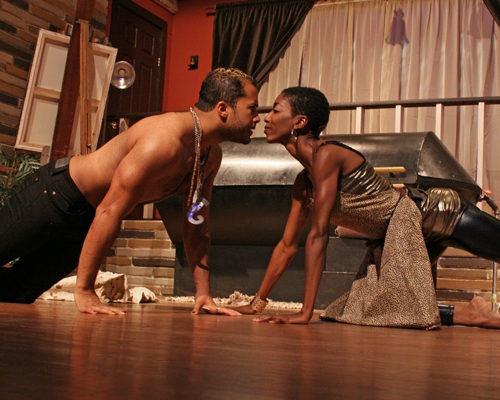 Im an artist. Sick and demented are positive attributes.

Hes a hot, sexy and charismatic artist with an ego as big as his reputation. Its a minor detail that Jack Brooks has zero talent for anything other than making people hate him.

In a snarky, behind-the-canvas look at the world of art, one where the ideal client is famous, productive and dead, Jacks own wife and art dealer plot his final career move in Joe DiPietros The Art of Murder, now playing at The Little Theatre of Alexandria.

Winner of the 2000 Edgar Award for Best Mystery Play, Murder is a skillfully written whodunit? from the talented pen of DiPietro, best known for I Love You, Youre Perfect, Now Change, the second-longest running Off Broadway musical in history.

Painting this portrait of murder is a colorful and often off-color script full of cross and double-cross motives laced with creative wordplay and intentional misdirections. All of this results in a satirical lampoon of the pretentious know-it-all critics and media manipulators of the art world.

The not-so-subtle elephant in the living room is Jacks relaxation chamber, an aptly designed coffin-like contraption where Jack submerges himself in water and listens to endless strains of Doris Days Que Sera, Sera.

And everyone, it seems, is tempted to pull the plug on the chamber each time Jack submerges himself.
While DiPietros script keeps everyone guessing, its the talented cast that keeps the audience intrigued.

Brandon DeGroat is Jack, whose remarkable talents not to mention bod are on full display as the eccentric artist  looking to make a killing with his bogus masterpiece Study in Red No. 4.  A favorite with LTA audiences after breakout performances in Leading Ladies and Visit to a Small Planet, DeGroats animated panache perfectly suits that of the over-the-top artist.

Jacks long-suffering wife Annie is played by Danielle Eure, who turns in a measured performance as an unhappy and creatively stifled artist who deceptively morphs into a methodical murderess.

But its LTA veteran Carl Nubile who anchors the show as Vincent, the smarmy and morally bankrupt art dealer. Nubile is deliciously snide as he alternately squirms, screams and sashays around the stage in a role that perfectly showcases his talents.

Rounding out the cast is Nicole White as Kate, Annies maid who spends more time tending to Jacks unwelcome advances than she does to her household duties.

The talented C. Evans Kirk not only directs the intrigue but also puts his artistic skills to use as set designer and has fashioned an eclectic stage anchored by   an isolation tank designed by Dan Remmers.  Also worth noting is the shoe collage by Robin Parker and Tracy Parker that is Jacks masterpiece.

While the language and brief nudity push this into PG-13 and R-rated territory, The Art of Murder is a colorful canvas of the vain world of manufactured celebrities that is a well-executed  diversion from LTAs more traditional fare.

The Art of Murder is playing now through November 21 at The Little Theatre of Alexandria, 600 Wolfe Street. For tickets or more information, call 703-683-0496 or visit www.thelittletheatre.com.