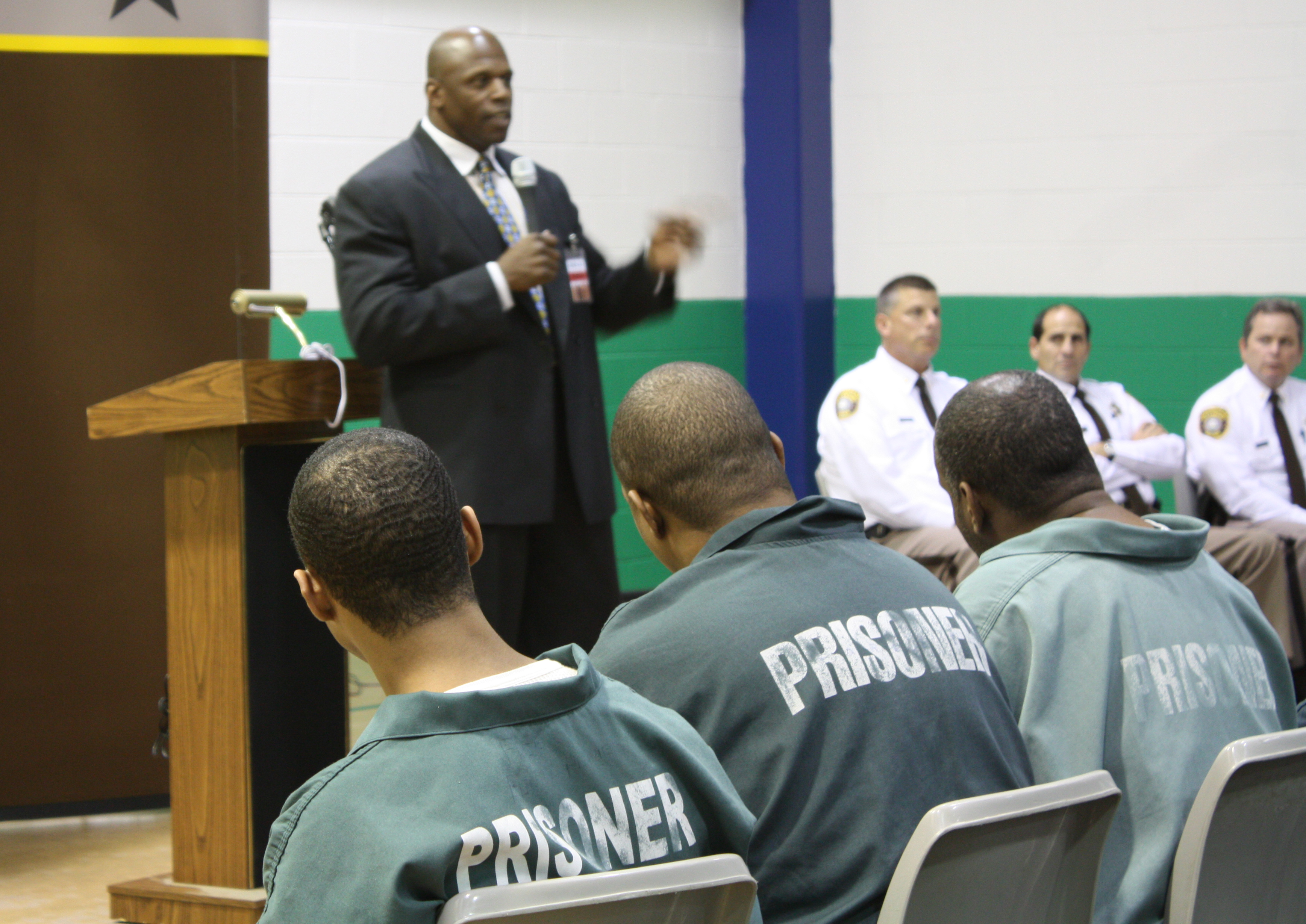 The message conveyed Thursday afternoon to the inmates at the Alexandria Correctional Facility was non-denominational. It didn’t matter whether someone was a Redskins fan, a Cowboys fan, an Eagles fan or a Giants fan let alone a free man or one serving time behind bars.

As the most recent installment of a series of motivational speakers for prisoners in the city jail, former Redskins linebacker Ken Harvey provided a message of optimism and perseverance many in the crowd may have not seen coming.

“Other than being inspirational, it was very uplifting to see a man that’s accomplished having gone through the rigors of dealing with the challenges that life has posed and to some extent succeeding  kind of brings some humanness to life,” said inmate Deondre Blount, 28.

Harvey, the 12th overall pick of the 1988 NFL Draft who retired after the 1998 season, stayed humble and did not preach stories of success to the crowd as if they were all he knew.

Indeed. The former linebacker, a four-time Pro Bowler as a Redskin, was once a high school dropout in Austin, with truckloads of athletic prowess but without any sense of direction.

“It got to a point where I was sitting in the house and I was hearing my dad tell my little brother not to grow up like me,” Harvey said of the moment he resolved to go back to school.

After working and playing his way through junior college, graduating from the University of California-Berkeley and joining the Arizona Cardinals, things were looking up for the gifted pass-rusher.

With one season in the books as a pro athlete, he and his wife had a baby boy who died at just 6 weeks old. Despite a lucrative job, Harvey didn’t have the money to pay for the funeral, forcing him to swallow his pride and ask for help.

“The hardest thing is to ask for help but sometimes help can make the biggest difference,” Harvey told the inmates.

“We go on these journeys and do all of this stuff and we finally happen to get to a point in our lives to realize the true value that we have in ourselves, who we really are,” he said. “It may not be what someone else has told you, it may not be the way you grew up but there is a value in everyone here, each and every person in this room.”

After Harvey’s speech, Blount was quick to recognize the very human similarities the linebacker shared with many, if not all, of the people in the jail’s gymnasium: Fears, insecurity, mistakes.

Facing a room full of people young and old, male and female, who all likely have reasons to think negatively of themselves, Harvey recounted the story of Saul from the Bible as an example of one’s self-image determining one’s self.

For Harvey, the story reminded him of his own youth as an exceptionally big and strong boy who easily stood out from his peers. While those and other situations could lead one to become aloof or shy, he urged the prisoners to break out of that cycle of negativity and change for the better.

Now a children’s author and businessman, Harvey is living proof that change can be positive and successful.

“I always kind of believe anything’s possible, there’s nothing you can’t turn around,” he said.

For Blount, who hopes to be released next June, Harvey’s frank presentation of his own shortcomings, including poor money management and appreciation, left an indelible mark.

With many months left until he may get the chance to resume life outside the jail, Blount said he was going to take full advantage of the time he has been allotted to rehabilitate himself while lacking the distractions facing those on the outside which was a main point Harvey made in his discussion with inmates.