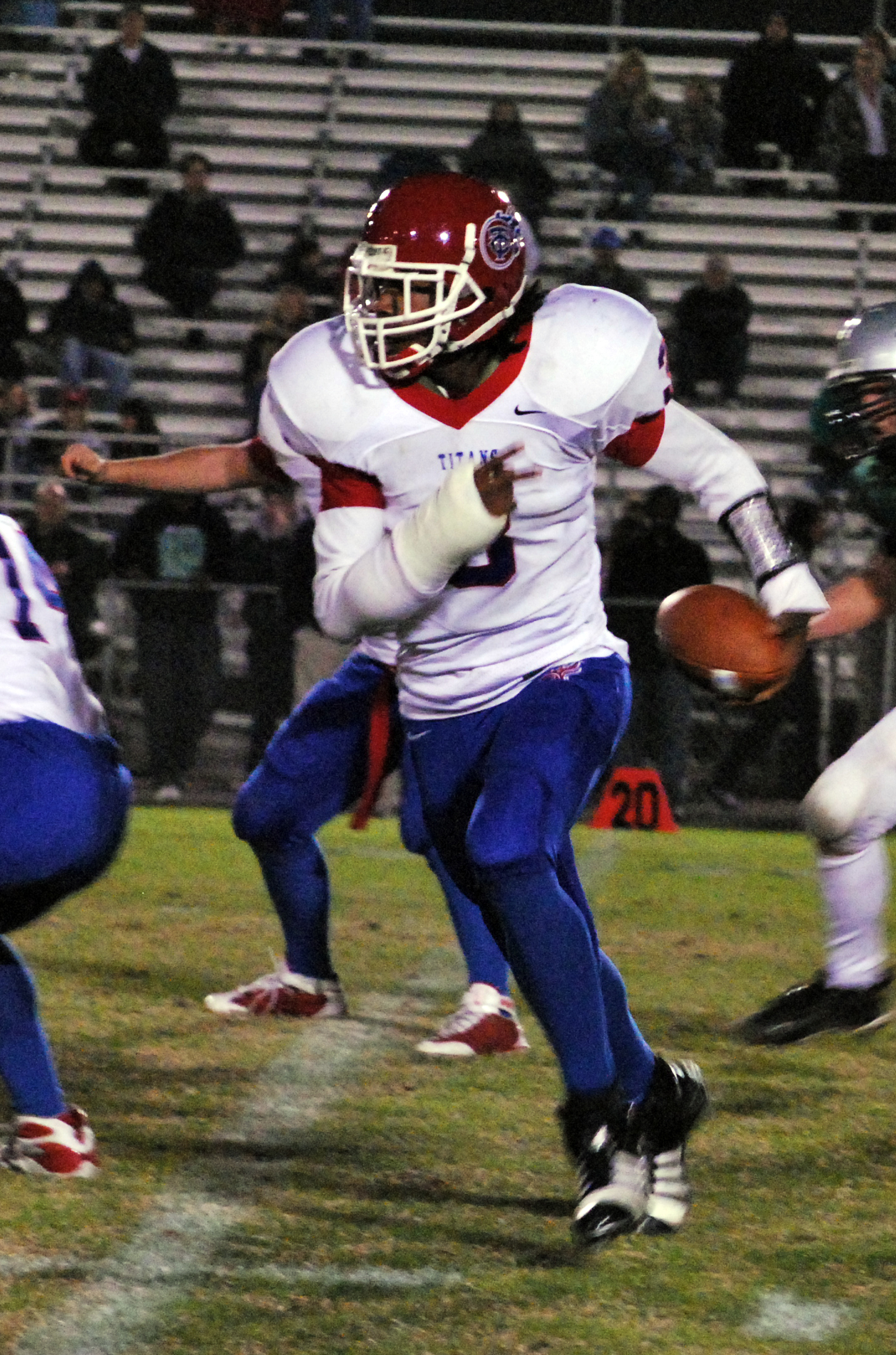 With less than two minutes to play in the first half of Friday nights game at South County High School, it looked as if T.C. Williams would head to their locker room down 7-0 in a game where a loss could erase their chances for a winning season and a postseason berth.

After a quick three-and-out and a short punt to their own 48-yard line, the Titans defense took the field in need of a big play or, at the very least, to keep the Stallions from scoring again before intermission.

Two plays later, they got what they were looking for when junior linebacker Damien Benton stripped the ball from South County wideout Michael Vane to give the T.C. offense another shot with 1:27 left in the quarter. From there, a 51-yard screen pass from senior quarterback Joe Hargrove to Will Rossi set up Hargroves 1-yard touchdown run, tying the game at 7-7.

That turnover-to-touchdown swing gave T.C. just the momentum they needed for the decisive second half as they went on to beat the Stallions 17-10, keeping their season alive with one game remaining in the regular season not that the Titans (5-4) were about to get ahead of themselves.

We told them we needed to win this game and dont worry about next week, and next week wasnt important until now, T.C. Williams head coach Dennis Randolph said. Now its important.

Going into Fridays contest, T.C. was on the outside looking in at the Northern Region Division 6 playoff race, but knew that three straight wins to finish the season would give them a shot.

Now ranked eighth in the Virginia High School Leagues Northern Region, the Titans can likely seal their own fate in this Saturdays season finale against Robert E. Lee High School.

T.C. tailback Robert Carter, whose 28-yard touchdown run in the third quarter proved to be the game-winning score, was still absorbing the meaning of his teams second straight win since a deflating 20-6 home loss to regional leader W.T. Woodson.

Im speechless, said Carter, who led the Titans rushing attack with 73 yards on 20 carries. This is like history right here. We havent been over .500 in like 20 years, so … Im glad to be a part of this.

Immediately after the touchdown, Carter nearly broke the game open, returning a punt 64 yards to the Stallions 2-yard line where South Countys Vanderbilt-bound safety Andre Simmons knocked him out of bounds.

The Titans failed to capitalize on Carters efforts and turned the ball over three plays later when a bad snap flew over Hargroves hands, recovered by the Stallions at their 38-yard line.

South County, which entered the game at 6-2 and still remains in the Northern Region playoff picture, knew this was a greatly different team than the one that struggled mightily on offense in the loss to Woodson.

They deserve credit, they played a whale of a football game, Bendorf said. I think theyre going to be a handful because Hargroves played two games and theyre going to get into the playoffs Im pretty certain.

Hargrove, the projected starting quarterback before the year began, did not get to play until two weeks ago because of a broken wrist suffered in the teams final preseason tune-up.

The Titans passing game floundered in the absence of his strong left arm, but reemerged in his debut against West Potomac where the senior set a school record for passing yards (297) and tied the mark for touchdown passes (4). His ability to throw down the field effectively has revitalized a T.C. offense that became run-heavy without him.

Obviously theyve been pretty good on defense all year and having that Hargrove kid gives them a whole other dimension, Bendorf said.

Hargrove (6-of-20, 96 yards, two interceptions) came nowhere near matching his record numbers from the previous week but his presence made it that much easier for T.C. to run the ball.

With one game to go and the chance get the programs first winning season since 1995 and first postseason appearance since 1990, everything is riding on Saturdays 1:30 p.m. home game against Lee (6-3), which Hargrove hopes isnt his last game as a Titan.

I feel like Ive got one more [win] for my team, Hargrove said. Im trying to go to Week 11, go past November 7.