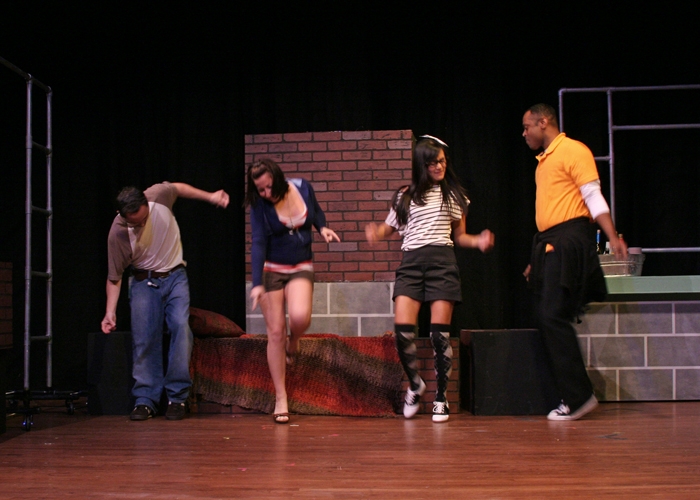 He’s in high school now, but he’s still a good man even though for copyright infringement purposes, he is no longer Charlie Brown.

We meet him now as CB in Dog Sees God: Confessions of a Teenage Blockhead, an unauthorized teen-angst parody of the Peanuts gang in a special late-night production now playing at The Little Theatre of Alexandria.

The innocent characters created by Charles M. Shultz in his familiar comic strip have been replaced by playwright Bert V. Royal with hormone-infused teenagers filled with jealousy and rage in a dark comedy that won the Excellence Award for Best Production at the 2004 New York International Fringe Festival and opened off Broadway in 2005.

In Dog Sees God, life has become a grim place for CB and his childhood cohorts. CB’s beloved beagle has contracted rabies, killed the little yellow bird and was just euthanized. CB’s sister is a goth-clad loner still longing for Linus, now a Buddhist stoner known as Van, while the Lucy-inspired role of Van’s sister is in a mental institution for setting the Little Redheaded Girl’s hair on fire.

Pigpen has cleaned up into a germophobic and homophobic  cocaine-snorting violent jock, and Peppermint Patty and Marcie are now Tricia and Marcy, a pair of clueless, cruel and sex-starved mean girls who swill vodka out of their milk containers in the school cafeteria.

The curtain rises on Patrick M. Doneghy as CB, who is mournfully missing his dog and wondering aloud if anyone believes in God or more precisely, if anyone thinks dogs go to heaven. This triggers a sexual identity crisis for CB, who turns to his piano-playing friend Beethoven (formerly known as Schroeder) for comfort, sending shock waves among the close-knit crowd.

Doneghy captures the Charlie Brown spirit as CB, a quiet but commanding role that is the glue that holds his group of friends together, while Keith J. Miller is the tender but tragic central figure of Beethoven.

Doneghy does yeoman’s work as CB wrestles with issues including death, sexual identity and love, even as he is told by Van’s sister, “No offense, CB, but I don’t think you’re cool enough to be gay.”

Miller, last seen at LTA as Thomas Jefferson in 1776, shows both comedic and dramatic timing and the interplay between he and Doneghy is especially poignant.

As Tricia and Marcy, Nicole Jacobs and Kat Sanchez deliver some of the biggest laughs as scantily clad frenemies who are not averse to some three-way action with Matt, frighteningly played by Shawn g. Byers. Jacobs and Sanchez make for a spunky comic duo while Byers unleashes a potent, twisted performance that is especially riveting in his vicious confrontation with Miller.

Making his LTA debut is Silvano Melgar as Van, whose philosophizing is now clouded by weed, which he mixed with the ashes of his security blanket after his lithium-addled pyromaniac sister, played by Jennifer Finch, and CB burned it.

Finch, in a brief role hindered by her character’s incarceration, is especially delightful to watch, as is Allison S. Galen as CB’s sullen sister in an unforgettable interpretive dance segment.

CB and the gang, for all their familiar traits, are hardly squeaky-clean teens. Their dialogue is peppered with a healthy dose of F-words and other choice expressions, and their attitudes are a caricature for intolerance and political incorrectness.

Directed by William D. Parker, the subject matter and language of Dog Sees God is not for the faint of heart. It is a show that features characters dealing with drug use, homosexuality, hate crimes and suicide. But it is a poignant play that is brilliantly executed by a talented cast who all deliver memorable performances that linger long after they take their final bows.

This is a far different world than the one first created by Schulz in 1950. If you’re looking for the sugary A Charlie Brown Christmas, rent the DVD. But if you can handle a theatre experience that is on the fringe, over-the-top and uncensored, head over to LTA’s late-night special production of Dog Sees God for an edgier dose of holiday entertainment.

Dog Sees God is playing now through December 19 at The Little Theatre of Alexandria, 600 Wolfe St. For tickets or more information, call 703-683-0496 or visit www.thelittletheatre.com.
Please note this is a 10:30 p.m. performance. This show contains strong language, references to drug use, sex and other sensitive topics. It is not recommended for children.