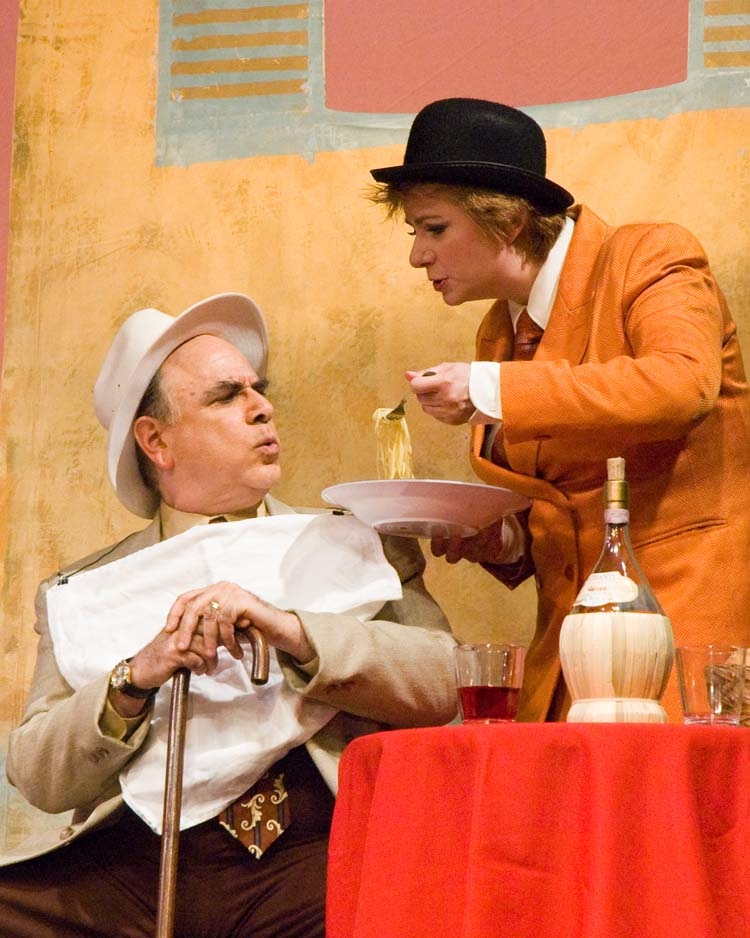 It’s a tale nearly as old as time. Originally penned as Les Fourberies de Scapin (The Trickeries of Scapin) in 1670 by Moliere, it took another 300 years for Frank Dunlop and Jim Dale to adapt the commedia dell’arte classic into Scapino!, now playing at The Little Theatre of Alexandria.

Set in modern day Naples, we meet young Ottavio, who loves Giancinta, and Leandro, who loves Zerbinetta. But their miserly fathers have forbidden them to marry so they seek out the aid of Scapino, a fast-talking scamp who weaves a tangled web of lies designed to swindle the men and unite the young lovers.

In a zany comedy where anything can happen and everything does, a series of “extraordinary coincidences” reveals the forbidden ladies to be the perfect daughters-in-law for the disagreeable dads.

The master manipulator in all this madcap mayhem is Scapino, played by Marianne Meyers, a graduate of the New England Conservatory of Music who was last seen on the LTA stage as Gertrude in The Underpants.

Playing the male lead, Meyers is a force of physical energy and comic creativity and scores the biggest laughs in a climatic salami-beating sequence that requires her to transform from a sadistic pirate to martial arts master to an entire company of British soldiers. She single-handedly carries the lengthy scene with the perfect balance of energy and ease.

Other familiar LTA faces include Ron Bianchi as Geronte, Steve Rosenthal as Argante, Ric Andersen as Carlo, Mary Ayala-Bush as Nurse, Elizabeth Replogle as Waitress and Liz Owens in the second against-gender role of Sylvestro.

Owens in particular is a delight to watch as she displays a keen sense of comedic timing punctuated with doses of facial and physical slapstick.

Bianchi, last seen in the LTA production of Leading Ladies, is the geriatric Geronte while Rosenthal is the aging Argante.  The talented theatre veterans bring an air of effortlessness to the family farce.
Andersen, Ayala-Bush and Replogle seem to be having the most fun on stage as they deliver strong performances in their supporting roles.

Under the direction of Rick Hayes, the cast of 15 is filled with talented actors making their LTA debut, with Paul Laudiero (Ottavio), Lucy Rojansky (Giancinta), Joe Randazzo (Leandro) and Juliana Ejedoghaobi (Zerbinetta) perfectly portraying the young lovers hopelessly in love.

With set design by Rick Hayes and Dan Remmers, costumes by Kathy Dodson and lighting by Michael Null, an explosion of color is created as the stage is transformed into a dockside Neapolitan cafe.

But it is ultimately Meyers in the role of Scapino that propels the plot and manipulates the cartoon comedy into a happy ending for all.

Scapino! is not about story; it’s about schtick the slapstick antics, blows, pratfalls and double-takes that make up this style of theatre. It’s a fun-filled frolic that provides the perfect family fare for LTA and theatre fans of all ages.

Scapino! is playing now through February 6 at The Little Theatre of Alexandria, 600 Wolfe St. For tickets or more information, call 703-683-0496 or visit www.thelittletheatre.com.