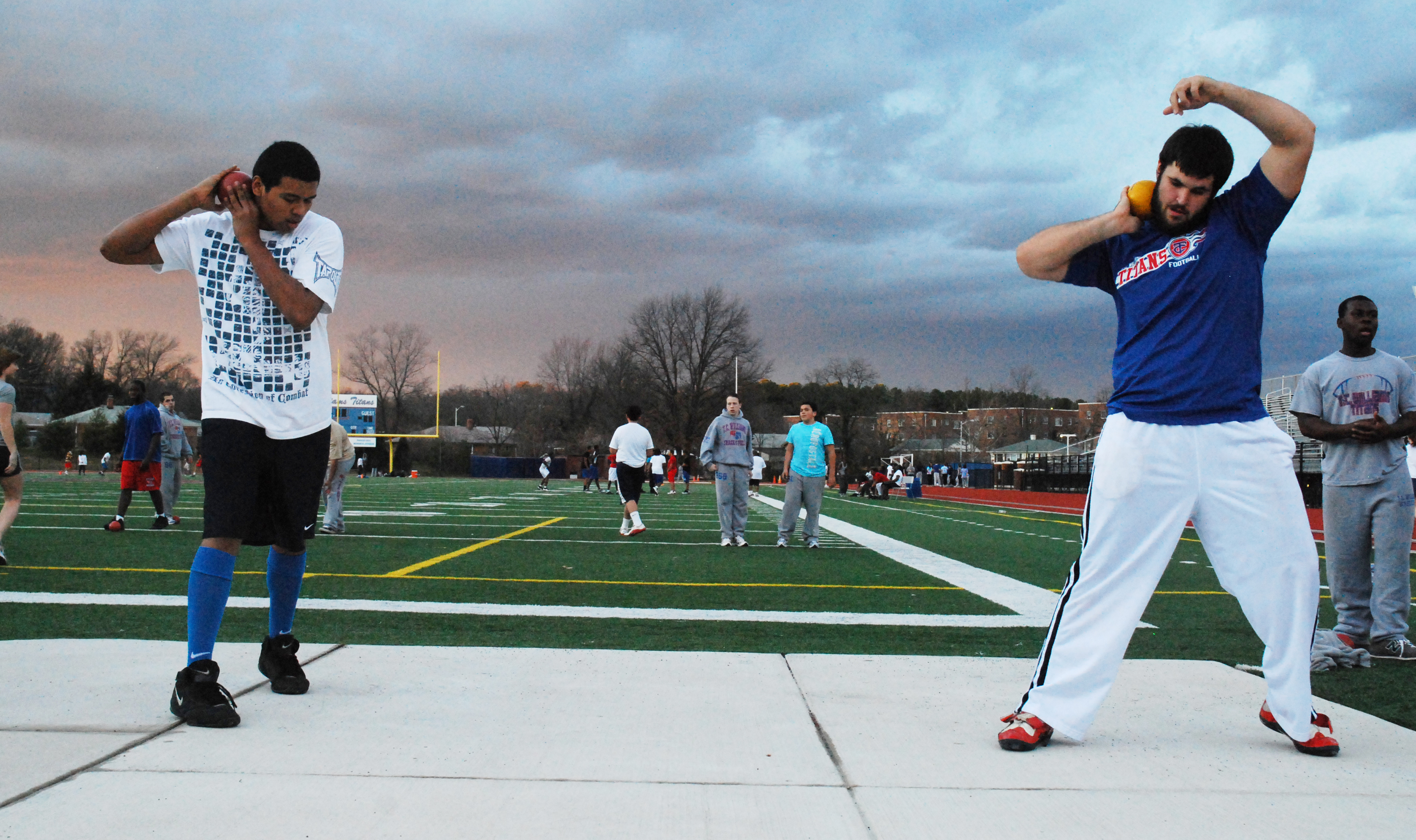 Asked to think back on a day this season when one shot putter was there for the other, the big brother bowed his head and scratched his thick black beard, leaning deferentially toward his baby brother.

The memory, from a track and field meet about three weeks ago at Christopher Newport University, wasnt kind to big brother, also known as T.C. Williams senior Luke Dorris.

Baby brother, sophomore Jose Urrutia, smiled and spoke up. I did pretty good, he said of his ninth-place throw, which registered 42 feet 9.25 inches.

He did great, Dorris corrected. Thats how he qualified for the district meet.

The two throwers and friends figure to be key pieces to the puzzle for T.C. as the team heads to the Patriot District championship meet on February 3 and 6.

While Dorris has notched the best mark of the two so far this season throws over 44 feet and one of the top marks in the district this year its the combination of the two that could be crucial in determining the Titans place at the meet.

Those instances where Dorris has pulled Urrutia aside to share some senior wisdom might make all the difference in the sophomores showing.

Im looking for [place] number one, for sure. Hell say the same thing I mean, he wont get it but number one and two would be great, Dorris said, laughing along with Urrutia.

The pair also worked together in the trenches this fall on the football teams offensive line, with Urrutia holding down the same spot Dorris did as a sophomore. But dont call it a sibling rivalry.

As mentors go, Johnson thinks Urrutia has one whos as good as they come.

When you think about T.C. track, Luke exemplifies everything about that, Johnson said. He comes to practice every day, works hard every day and hes a great student.

The lessons arent lost on Urrutia: Im picking up all his technique, how he carries himself as a person and how to take on a leadership role, because Im going to be here for another two years and I want to take it on just like he did, he said.

With Dorris out of town visiting Columbia University, Urrutia will have to improve his form without his throwing buddy this Saturday for a meet at Virginia Tech, the teams last stop before the district championships and the last chance to qualify more athletes for the competition.

Yet, if the ethereal skies and balmy weather washing over Mondays practice at Parker-Gray Memorial Stadium are any indication of whats to come, the next two weeks could be impressive for the Titans.

Weve had some bright spots but weve lost a good group of seniors over the last two years, said Deville, citing this years crop of youthful sprinters and mid- and long-distance runners.

The Titans graduated several high-scoring athletes over the last two years including state record-holder and two-time national champion Tynita Butts making the points harder to come by so far this season.

Were real young, but you never know whats going to happen next week whos going to pull through for you or who might drop out on any of the other teams, Deville said. Were right on the precipice.