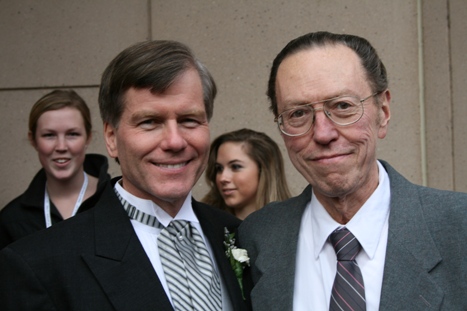 For Bishop Ireton High School teacher Ron Umbeck, having a front row seat in Richmond as his former student was sworn in as Virginia’s 71st governor Saturday meant being a part of history.

“I had never been to the Capitol building before,” said Umbeck, who was Bob McDonnell’s calculus teacher when McDonnell was a senior at Bishop Ireton. “To have a reserved seat as he was sworn in, I knew as I was watching it was a once-in-a-lifetime experience.”

McDonnell, who graduated from Bishop Ireton in 1972, saw to it that his alma mater was included in the Inauguration Day festivities by asking the school to march in the parade. The fact that B.I. doesn’t have a marching band was a minor detail.

“I think this may have been the very first marching and parade experience for the school in our entire history,” said Dr. Randal Eyles, director of fine arts and conductor of the school’s wind ensemble. “We put together a four-person drum line from a freshman percussion class that I teach and literally borrowed the bass drum carrier from Hayfield High School.”

Eyles created a cadence, recorded it on a CD and gave it to cheerleading coach Angela Hope to work with all since he got the word January 5 that they would be participating in the parade.

“We sort of pieced this thing together,” Eyles said. “We had four drummers and 18 cheerleaders, who had created a cheer to go along with the cadence.”

McDonnell, who pumped his fists in the air and cheered as the Bishop Ireton students stopped in front of the reviewing stand, hosted a reception for friends and classmates from the schools he attended over the years   Bishop Ireton, the University of Notre Dame and Regent University   and spent time talking with each of those in attendance.

“He [McDonnell] talked to our group and told the students how great B.I. is and what a tremendous influence it was on him,” Eyles said. “Then he shook every student’s hand and asked them if our motto is still “Advance Always.’ When he found out it was, he smiled and said, “Well, today I’ve advanced.'”

Umbeck recalled many things about his former student but did not hesitate when asked what he remembers most about McDonnell’s time at B.I.

“I’ll never forget that football game,” Umbeck said, referring to the November 13, 1971 game against the now-famous T.C. Williams football team. “I remember that he scored the only touchdown and extra points that Ireton scored against T.C. Williams that year.”

(McDonnell indeed had a good game that day, catching seven passes for over 100 yards, intercepting a pass, recovering a fumble and scoring the first touchdown the Titans had allowed in 20 quarters in what was ultimately a 26-8 loss for B.I.)

“Yes, he was a good student and got a 4 on the AP test,” Umbeck said. “But no one who was there will ever forget that football game.”
McDonnell clearly appreciated visiting with the students and teachers from B.I., spending an extra amount of time with them even as his security detail tried to move him along.

“There weren’t any of us who had ever shook hands with a governor before,” Eyles said. “It was a great experience and something we are all really proud of.”
Umbeck, who has been at the school since its first graduating class, echoed those sentiments.

“I think for everyone but especially for me, I’ll never have that experience again,” he said.