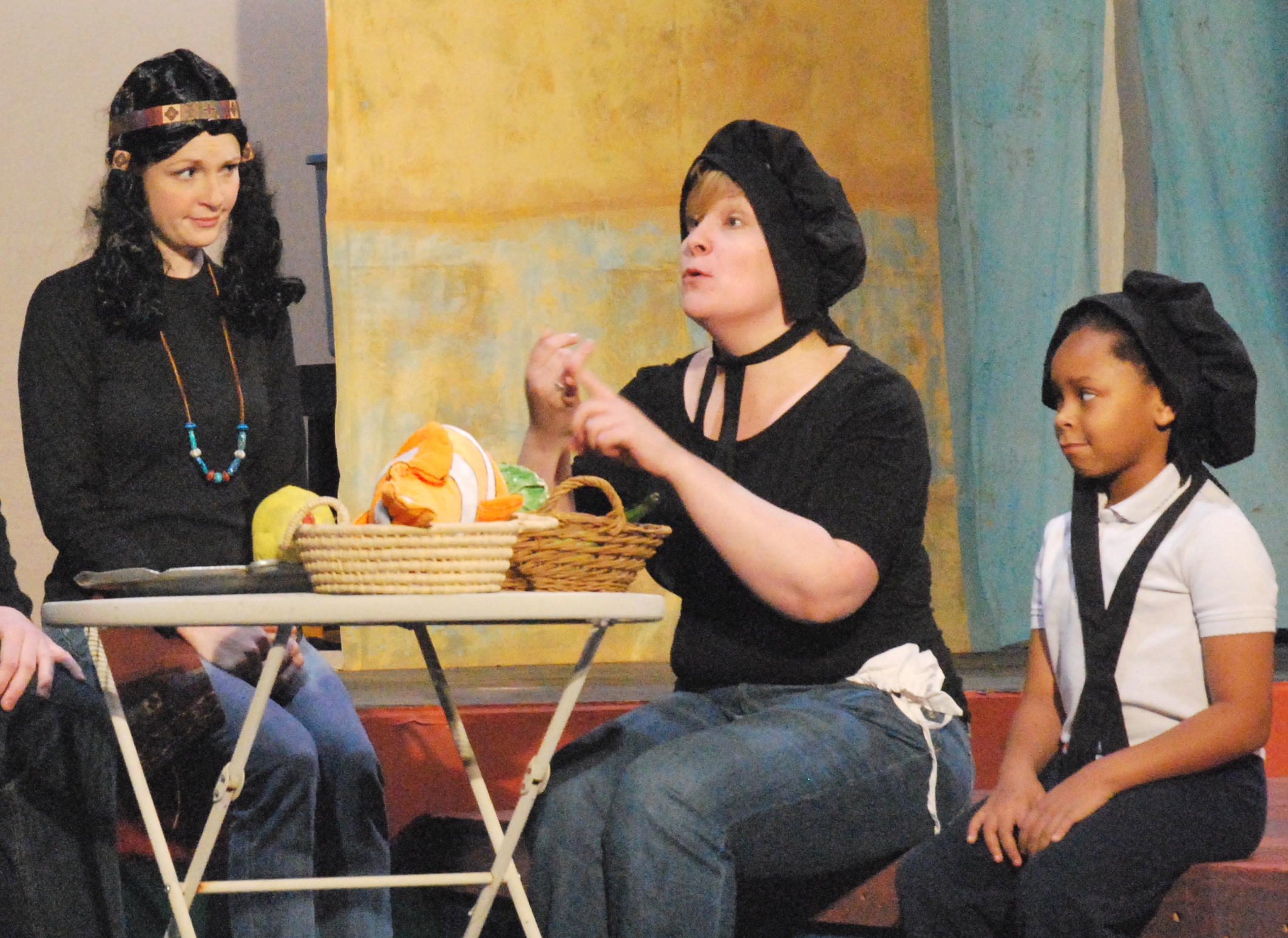 As U.S. history goes, we all know that it was Paul Revere who, riding solo, tipped off the colonials with his famous ride. And it was Christopher Columbus who was first to discover the New World.

The finer points of history, somehow, over the years, gain rust.

With that very thought in mind, the students of Lyles-Crouch elementary school made the block-and-a-half walk to The Little Theatre of Alexandria Friday morning for a little exercise in educational theatre.

“It’s a way to give these kids this history but say, ‘Look at it a little more critically,'” said The Little Theatre’s Rachel Alberts.

The original production written by Alberts and LTA staffer Annie Vroom and performed by volunteer thespians was the sixth such installment of a partnership between the theatre and the school, according to Alberts, who is also the head of public relations at LTA.

Aside from providing many of the children with their first theatrical experience, LTA’s Project for Educational Theatre offers another venue to build upon the school’s core knowledge curriculum, said Kris Fischer, a Lyles-Crouch reading specialist.

The end result, a 30-minute run-through of key landmarks on the roadmap of American history (or is it folklore?), prompted some critical thinking and interaction with the kids down the street.

It left even the professor (played by Ashley Hammond) conducting the show wondering if her planned lecture was based more on fact, fiction or folklore.

“It seems like it’s hard to find something in our history that’s 100 percent accurate!” the professor said.

Shifting in and out of roles ranging from Ben Franklin to sailors on Columbus’s Santa Maria to a youthful George Washington, the actors, too, came away from the stage a little more wary of what they have learned or thought they learned in the past.

“It’s fascinating what we’re told and then we find out that it’s not quite true,” said actress Erin Gallalee. “Things that you’re not actually taught and just hear them,” you end up thinking are true.

The five-person troupe, all previously affiliated with LTA in some capacity, including three from the theatre’s fall production of The Foreigner, met once a week over the course of a month to refine the multi-sketch performance, they said.

“It’s one of those things where it’s theatre but it’s not,” Gallalee said. “It is, but you can … have fun. It’s about finding what works.”

For the writers, one of the keys to a successful show is what the actors bring to the stage and add during the rehearsal process.

“They get to call the shots a lot,” Alberts said. “We give them the scripts, but we say, ‘Please make it come to life.'”

All five hold down full-time non-acting jobs, but the special morning show for Lyles-Crouch was a unique way to connect with an audience in their spare time.

“I’d heard good things about this educational theatre program,” said actor John McCracken, an IT specialist with Dell. “It just sounded like fun, to do something different [and] interactive with kids.”

And the positives of the partnership extend beyond the walls of the play hall. Last summer, LTA received the Outstanding Partners in Education award from Alexandria City Public Schools for the work it has done with the south Old Town school.

“Our kids really, really enjoy this,” Fischer said after the first show of the morning for the school’s youngest grades.

“We love to do it, but it’s also hard,” Alberts said. “Everyone here has a job, so they’re all making arrangements to come to rehearsals and everyone’s taking off the morning right now to do this.”

“When I was younger, I was more of a visual learner so I relate to watching a play like this,” Hammond said. “I think it would be much easier to learn about history like this than read about it.”