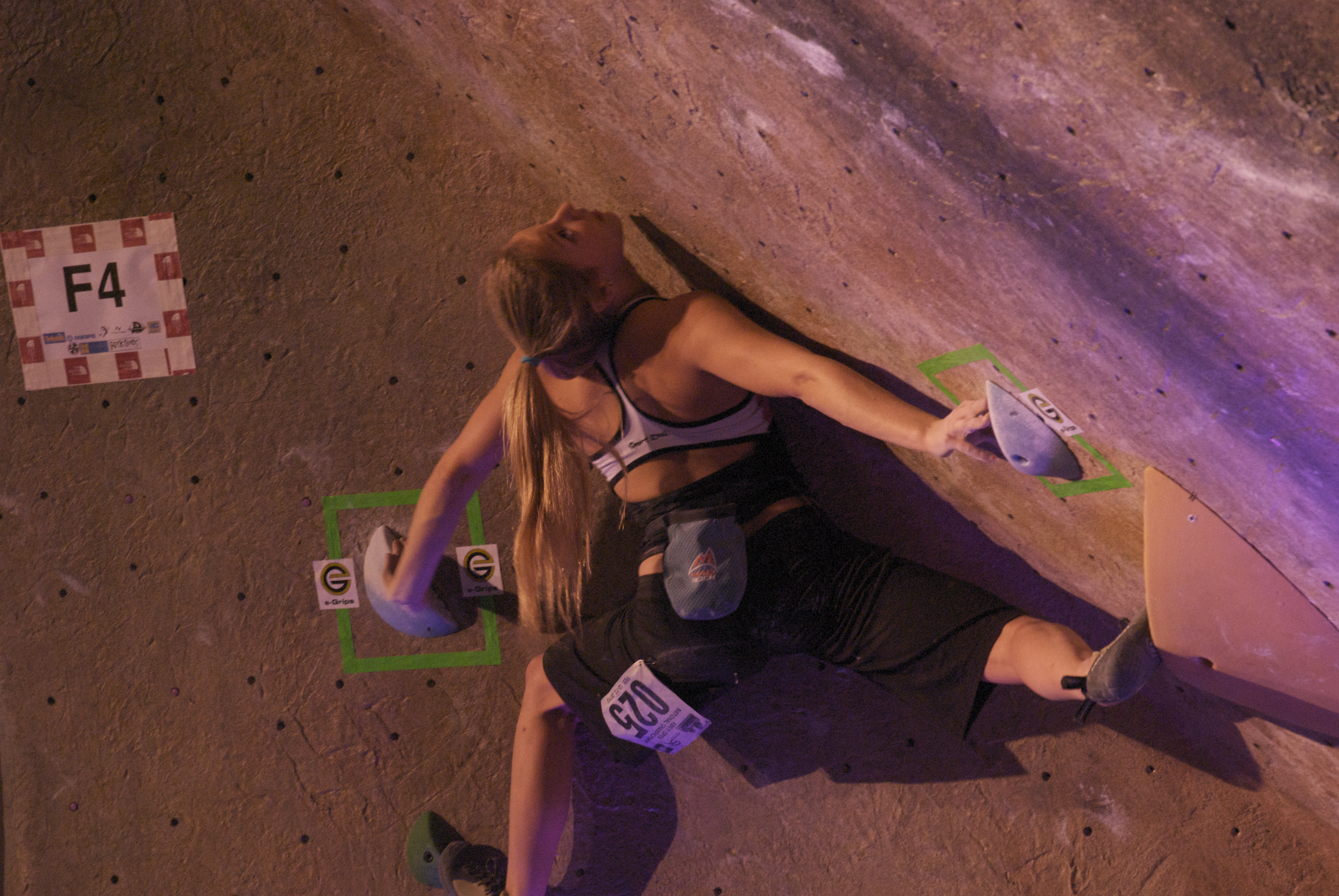 The cheers for hometown favorite Sasha DiGiulian grew louder as she advanced from one “problem” to the next during the American Bouldering Series finale Saturday night at Sportrock climbing center.

However, it being the national championship and all, those same problems a term that in rock climbing refers to the series of holds climbers have to get to the top of the wall weren’t getting any easier.

Having topped each of the first two walls on her first attempts, DiGiulian, starting in the middle of the pack of 15, had set the pace for the favorites behind her to follow. Yet, despite the hot start and the home crowd, the Alexandria teen was unable to stay apace.

Sitting beside the final wall, she could only look on as Alex Puccio, the top qualifier and final climber of the night, passed by her and the rest of the field to seize the title.

The win, Puccio’s fourth national championship, cemented the Colorado native’s spot as one of the United State’s three representatives on the 2010 World Cup circuit.

“I was psyched to come and redeem myself and take back the title,” said Puccio. The 20-year-old had three-peated as champion until last year, when she ceded the crown to Alex Johnson, this year’s runner-up.

“I knew going into the last climb that Alex had three tops, so I either had to flash it or do it the second time or else I lost,” Puccio said.

Climbers had five minutes to navigate each of the four problems on the towering vertical walls. Their scores stemmed from reaching holds in zones midway through the course and securing the top hold.

Johnson, No. 16 in the world and three climbers ahead of Puccio, was the only other climber to top three walls and did so on the third problem, a flat slab requiring female climbers to move laterally without hand holds before navigating a harsh corner and making another three moves up the inverted portion to the top.

The defending champion, though, was unable to master the final wall and left the door open for Puccio.

After failing on her first attempt, Puccio reassessed the situation. A slight change in orientation facing the next hold rather than the more intuitive back-to position was just what she was looking for.

“I was just spinning around to see what it would look like from the other angle and I was like, ‘Oh, wow. This feels and looks better,'” she said. “I knew once I did that I had the climb.

“You know you have the high point when they start cheering for you and they don’t stop cheering until you reach the end. It’s the most exciting feeling when you don’t hear the ‘Ohhhh’ from the crowd.”

DiGiulian, who tackled the problem several climbers before the eventual champion, didn’t reach the same conclusion and struggled through several attempts. She walked away knowing a win was very unlikely.

“When I was on it, I thought, ‘I’m way too short for this,'” DiGiulian said. “I kind of misread that, which is a little upsetting.

“A big part of climbing is reading the climb and if you don’t read it right it’s no one else’s fault but your own,” she said.

If the competition wasn’t enough on its own, Puccio also had to fend off a cold on the eve of the event. A steady dose of ibuprofen did the trick, she said, but does little for her biggest fear: The flight home.

Perhaps, though, the win provided just enough solace to make trip bearable.
Looking down at the fresh trophy clutched in the V of her left arm, she smiled, saying, “Hopefully this makes me feel more comfortable.”

In the men’s competition, also held Saturday night, Daniel Woods successfully defended his 2009 title by topping three of the four walls one more than second-place Matt Bosley and third-place Robert D’Anastasio. None of the men completed the last problem in regulation.