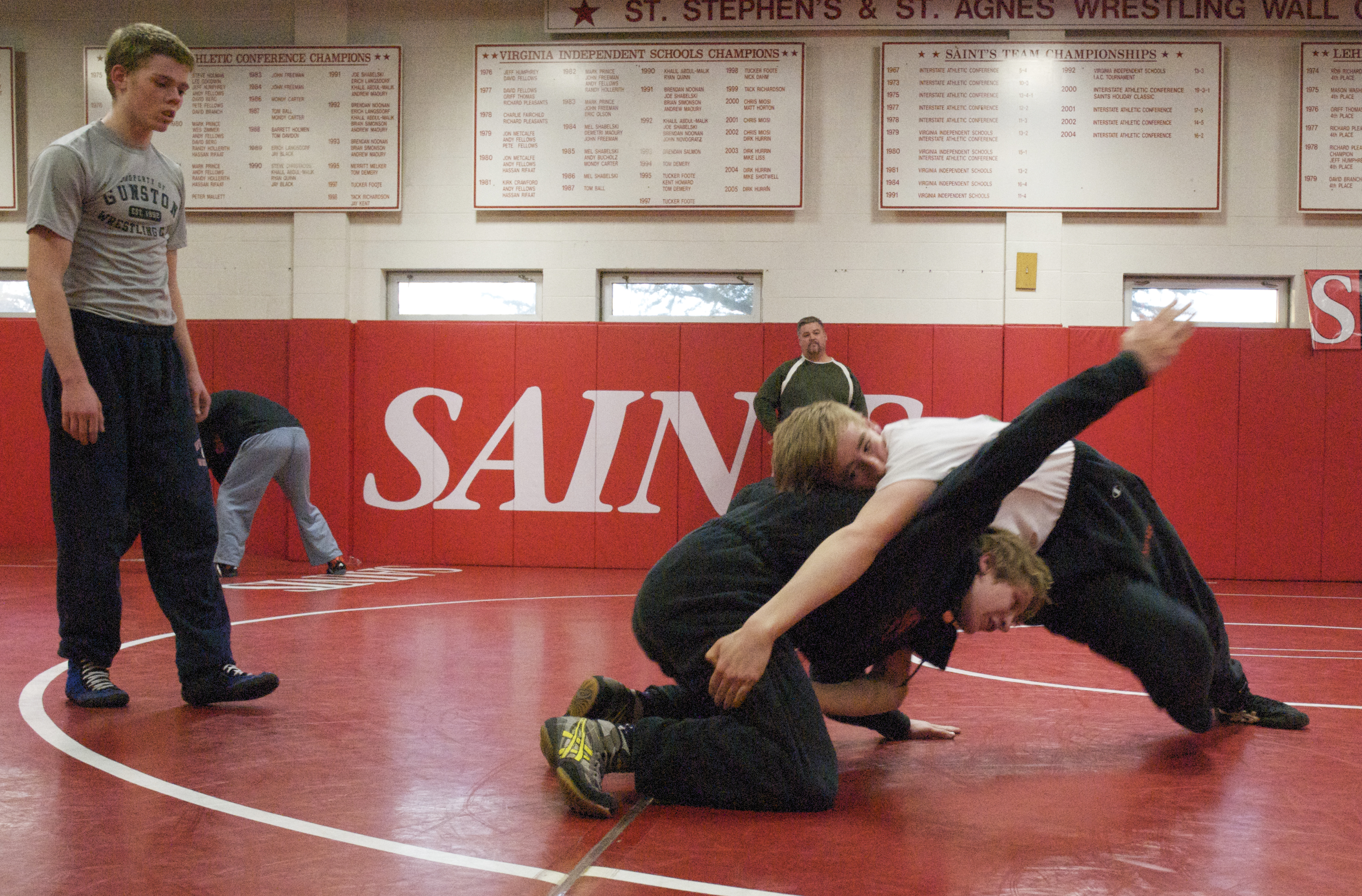 Fortunes have that knack for changing without a moment’s notice.

Many of the same storylines tend to crop up more often than others: A 3-pointer rims out at the buzzer. A tipped pass is intercepted and returned for a touchdown. The walk-off home run dies in a gust of wind at the warning track.

For the St. Stephen’s / St. Agnes wrestling team, serendipity touched down in the form of pivotal last-second pins against Episcopal, their intercity and conference rivals from across Seminary Hill. That was January 8 and the Saints were sporting a pedestrian 3-4 record for the season.

Fast forward four weeks and that same team boosted by the 40-34 win in the Alexandria City Championships against the perennial-powerhouse Maroon is heading to the Interstate Athletic Conference championships this Saturday with a new attitude, a 15-5 record and a month’s separation from defeat.

“Every team has their moment in the season that really pushes you to the next level and that Episcopal match was it for us,” said Saints head coach Joseph Shabelski. “We didn’t know exactly what we had but we’ve run with it.”

“We’ve had a decent month, yeah,” said junior Anthony Jacobsen, smiling in understatement, referring to the Saints’ 12-win tear to finish the month of January. It was the junior captain’s comeback pin in the final match against Episcopal that sealed the season-making win.

Judging by junior captain Kyle Swenson’s response, it sounds like staying under the radar is just fine.

“I know, right?” said Swenson, in playfully hushed tones, of his team’s recent success. “Now we’re sort of like the dark horse in Virginia, actually. We upset Episcopal and we were supposed to get destroyed by them on paper.

“It set the bar, telling us we could actually do this, we can beat our cross-town rivals,” he said. “The year before they really destroyed us but we came back with only one senior and sent a message that we’re back.”

Every day, the St. Stephen’s wrestlers practice in a room where the feats of their predecessors are front and center, dominating more than an entire wall with several large record boards. From 1978 to 1992 the Saints brought home five Virginia Independent Schools Athletic Association state championships but nothing since.

The last few years had been particularly rough.

“It’s impressive that the kids are working hard and practicing what we’re preaching because the last couple of years hadn’t been great,” Shabelski said. “They could’ve easily said, ‘I don’t want to do this coach, it’s too hard.'”

Rather, Shabelski’s wrestlers dedicated themselves to training and weight-lifting during the summer. Along with learning quickly on the mat this season, the young team the Saints carry just one senior starter, captain Tyler Haley has morphed from a rebuilding project into a genuine surprise package.

“In my dreams I thought we could do really well but you never know how things are going to progress,” Shabelski said. “They’ve taken it to the next level a lot quicker in my mind in terms of where I thought we would be this year.”

So far, the Saints only conference loss has been to a dominant Georgetown Prep team, leaving them in the thick of what Shabelski expects to be “a battle for second place” with, of all teams, Episcopal.

“I feel like a lot of [the success] is a confidence thing,” said Haley, who picked up his 100th career victory last Friday. “Last year, some of the younger people weren’t winning as many matches as they’d like to and this year they had a good start, got off to a nice rhythm and that really boosted morale for the rest of the season.”

As Haley sees it, his team has “a really good shot” at their best finish in the IAC tournament in several years.

While the underclassmen should continue to reap the benefits of experience next year and beyond, Haley’s parting gifts only continue to grow in number.

“This year we’ve done so many things as a team that I haven’t been a part of since I’ve been here, it’s just a really nice way to end things senior year,” Haley said.