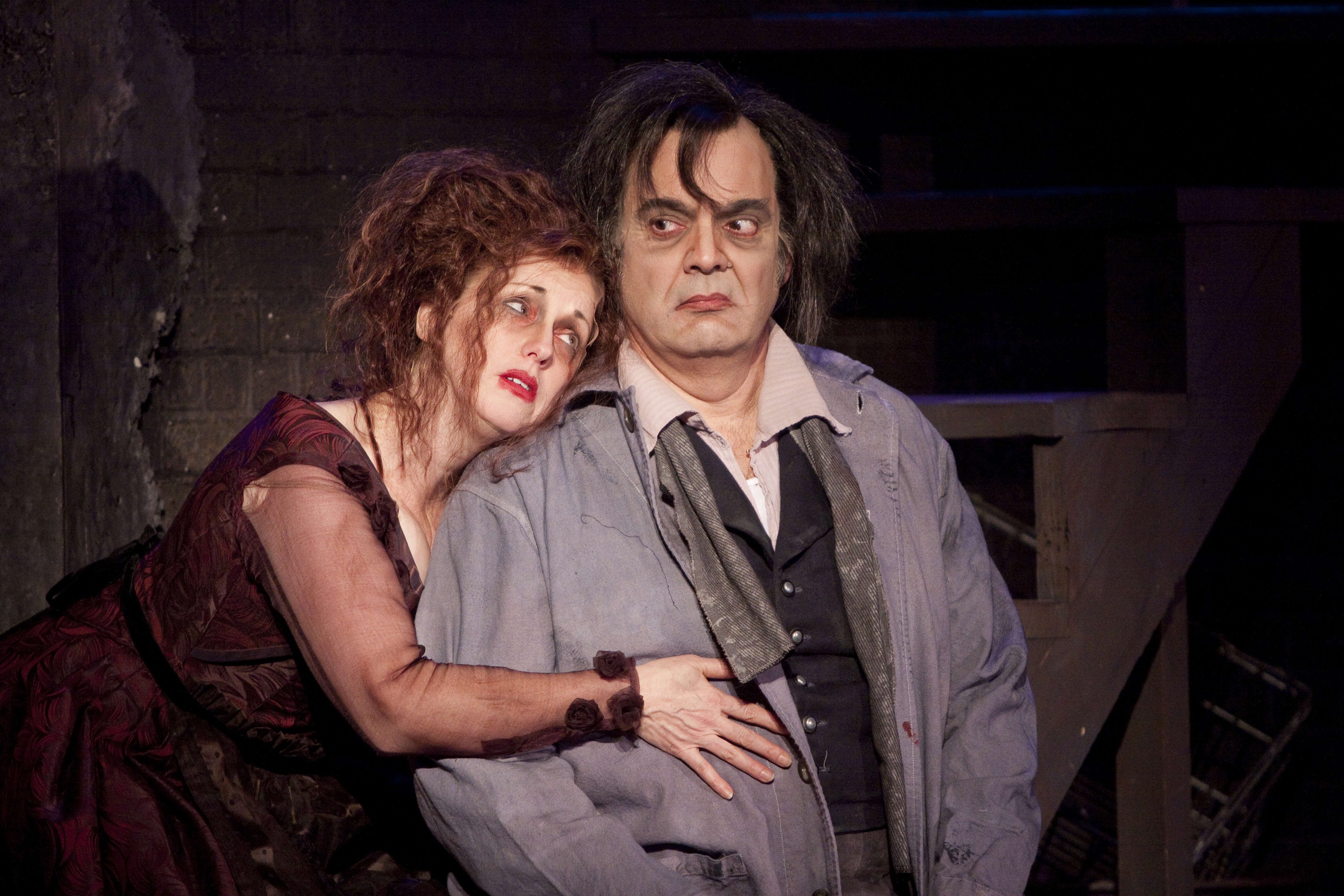 Stephen Sondheim is one of Broadway’s most celebrated composers and for most fans, Sweeney Todd, the Demon Barber of Fleet Street is his masterpiece musical a macabre tale of cutthroat revenge extravagantly brought to life and playing now at Signature Theatre.

Winner of nine Tony Awards in 1979, Sweeney Todd, a showcase for Sondheim’s calculated dissonances, is sordidly spellbinding under the brilliant direction of Artistic Director Eric Schaeffer and turns Signature’s 276-seat MAX theatre into a Grand Guignol reminiscent of the famed Parisian house of horrors.

With its rivers of blood, this is Signature’s third adaptation of the Christopher Bond tale of a barber gone mad and obsessed with revenge, a fitting reprisal of the first musical ever staged at Signature for its 20th anniversary season.

Set in Victorian London, Edward Gero stars as Benjamin Barker, a barber falsely imprisoned by Judge Turpin because of the judge’s own desire for Barker’s wife. After leaving prison, Barker returns as Sweeney Todd to find his wife poisoned and his daughter Johanna held captive by the judge who is intent on marrying her. As he plots his revenge, Todd joins forces with Mrs. Lovett (Sherri L. Edelen), and while he turns his barber chair into a guillotine, his new partner turns the bodies into baked goods.

Gero, hailed as one of the area’s premier Shakespearean actors, is riveting as Todd, a razor-wielding madman intent on seeking vengeance. The four-time Helen Hayes Award-winner handles the tour de force role with haunting conviction and takes command of the challenging score.

Edelen, who won a Helen Hayes Award for her performance in the Signature production of Les Miserables, is both hilarious and heartbreaking as the eager Mrs. Lovett. Her impeccable comedic timing and vocal agility are especially evident in the humorous Worst Pies in London and the duet A Little Priest with Gero.

In addition to Gero and Edelen, the cast of 18 includes Chris Van Cleave as the lecherous Judge Turpin, Gregory Maheu as the naive young Anthony, Sam Ludwig as the simple-minded apprentice Tobias and Chris Sizemore as the villainous Beadle Bamford.

As the malevolent judge, Van Cleave’s tormented lust for Todd’s daughter is mesmerizing to watch, while Ludwig is at once both strong and touching, particularly in his captivating delivery of the show’s most melodic and tender ballad Not While I’m Around.

Sizemore, a favorite with Signature audiences, does not disappoint, delivering a strong, consistent and fiendish performance that showcases both his acting and vocal talents.

Much credit also belongs to the production team of Schaeffer, James Kronzer (scenic design), Kathleen Geldard (costume design), Chris Lee (lighting design) and Jon Kalbfleisch (music director), who create a London stage that is as dark and unsettling as the play’s subject matter. Lee in particular uses his tools to especially chilling effect.

At once beautiful and brutal, there is little in Sweeney Todd that is not a display of extraordinary talent. It is not for the faint of heart, but the humor, impeccable production design and glorious score of songs set in counterpoint are a brilliant tribute to Sondheim whose nine Tony Awards are more than any other composer and provides theatre aficionados with a haunting yet memorable evening of entertainment.