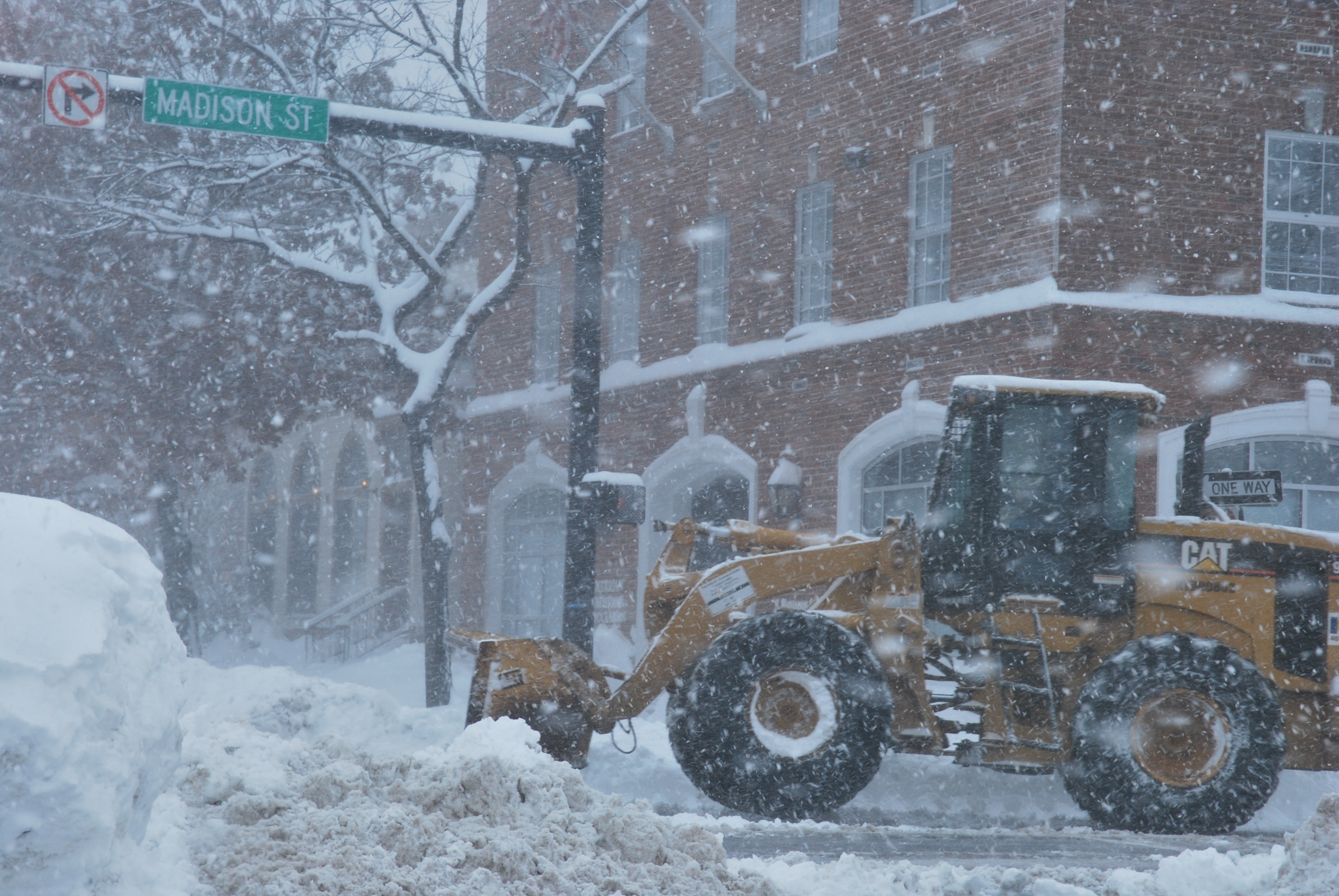 It was the high-water mark in a week-long battle with the elements. Storms that began last Friday and Tuesday nights dumped more than 30 inches of snow in locales around the city over the course of just five days, wringing up a hefty bill for city planners and severely limiting mobility for thousands of Alexandrians.

The sum of the two storms added enough to the seasonal snowfall total at Reagan National Airport to set a new record for the main weather station in the Washington area.

According to a release from the National Weather Service around 3 p.m. Wednesday, the airport had received 54.9 inches of snow this winter, beating the previous record, set in 1899, by a half-inch. The total accumulation also sets the mark for snowiest month of all time in the region, breaking the record of 28.7 inches recorded in February 2003.

In Alexandria, the greatest accumulation was in the city’s center around T.C. Williams High School, where the National Weather Service recorded 28.9 inches of snow from the Friday-Saturday storm.

The wintry blitz came just eight weeks after the city received its biggest snowfall in years, a 16-plus-inch December storm that exceeded the city’s $839,000 snow removal budget for the year.

The Alexandria government has been closed since last Friday when City Manager Jim Hartmann declared a state of emergency in the city.

The drastically limited employee base has left the day-to-day management up to top city officials in the Emergency Operations Center. More than 100 employees have been working 12-hour shifts alongside contracted workers to keep the city functioning, according to city budget director Bruce Johnson.

Some workers braving the conditions for the emergency operations were lodged in city hotels and transported to and from duty at various posts.

The 38 plows and spreaders on the road as of Wednesday morning were tasked to keep city streets passable, Johnson said, though many secondary or tertiary roads were still covered with several inches of snow before Tuesday’s storm hit.

“We’re not focusing on keeping just the main arteries plowed down, curb-to-curb to dry pavement, rather, we’re trying to get each road passable,” Johnson said. “They still don’t look very pretty, but at least you can drive a car on them, or, more importantly, an ambulance or fire truck.”

The snow removed from intersections around the city via a crew of dumptrucks is being emptied in open space at Potomac Yard, according to city officials.

A National Guard contingent from the Norfolk-Virginia Beach area answered the call during the state of emergency, which Gov. Bob McDonnell (R) declared for the Commonweatlth, arriving 70-strong 14 in Alexandria on Sunday to assist in transporting people and goods throughout the region.

“Basically, where their vehicles can’t get to or an EMT service can’t get to, they’ll jump into our vehicles and we provide transportation to where they need to go,” said Lt. David Mummert.

“This is what our job is. This is what most of us joined the National Guard to do,” Mummert said. “If we weren’t here, we would be the civilians out there needing help.”

The weather also led to the cancellation of Tuesday night’s City Council session, when Hartmann was scheduled to unveil the first draft of the city’s budget for the upcoming fiscal year. That meeting has been rescheduled for February 16.

Paying for the plows

The one-two punch of the snow storms last week only added to the city’s financial woes, with the cleanup expected to cost more than $1 million, Johnson said.

As of Wednesday afternoon, Johnson was unable to say whether the Friday-Saturday storm will end up as the most expensive winter storm in city history, but did say this week’s should be more costly than the December dumping.

Contracting workers and machinery to plow city streets and clear roofs burdened with tons of snow is just one of the costs.

“This is a very, very large effort to try to protect public safety,” Johnson said.

Though the city will apply for federal disaster aid to soften the financial blow from the recent blizzards, Johnson said such aid usually only covers about half of the expenditures for a given event.

“That rainy-day fund that people talk about to save for emergencies? We can call that the snowy-day fund now,” Johnson said.

A week without school

Due to the storms’ aftermath, students in Alexandria City Public Schools were treated to an unscheduled vacation. On Tuesday, ACPS officials announced schools would remain closed through today, making it five days in a row without class and even longer without after-school activities, meetings and athletic events.

The scenario has created some tough choices for Superintendent Morton Sherman’s staff as they rearrange the remainder of the school calendar.

ACPS now has eight snow days to account for this school year, only three of which are budgeted into the current academic calendar.

Making up the lost time without drastically extending the calendar and also paying heed to test preparation is a concern for some parents, like PTA Council Vice President Marianne Hetzer.

“We are losing precious instructional time now,” Hetzer wrote in response to Sherman’s blog post. “Our advanced (AP) students and our at-promise students will not benefit as much from time added to the calendar” before standardized testing is completed by June 16.

In the case of the last two storms, despite mostly accurate forecasting, the sheer amount of snow has left many streets passable but not clear, and clearing school grounds was not a priority for the city as it dealt with nearly three feet of snow in some locations.

“In addition to roads and parking lots, we must consider whether sidewalks and bus stops are clear enough to avoid having students walk in the streets,” Sherman said. “Finally, we look at roads leading into the city from outside Alexandria, because most of our bus drivers, building engineers and teachers live outside the city limits.”

A new way of life, temporarily

By noon Saturday, Dominion Power reported more than 2,000 customers without power in the city.

Due to the outages, the city opened up Charles Houston and William Ramsay recreation centers as warming shelters where residents without power or heat could spend the night.

The weather interrupted and cancelled DASH bus service and suspended above-ground Metro rail service for most of the five-day period, adding to mobility woes for residents with snowed-in cars and unplowed streets.

The bounty of snow led sledding enthusiasts to steep grades around town, including the hills around the George Washington Masonic Memorial and the embankments near the Braddock Road metro station.

Elsewhere, residents adapted to the snow constructively and built igloos to accompany the bulging snow banks.

For Rich Heilman, owner of Old Town Ace Hardware, the extreme snowfall was only an inconvenience for business after he ran out of shovels and ice-melt to sell.
Over the last week, the shop sold “at least a thousand” shovels, Heilman said, “and I probably could have sold double that if I had them.

“Some of the shelves are starting to get a little bare,” Heilman said of his wares after a week of blistering sales. “There’s a saying in the hardware business that natural disasters are good for business.”