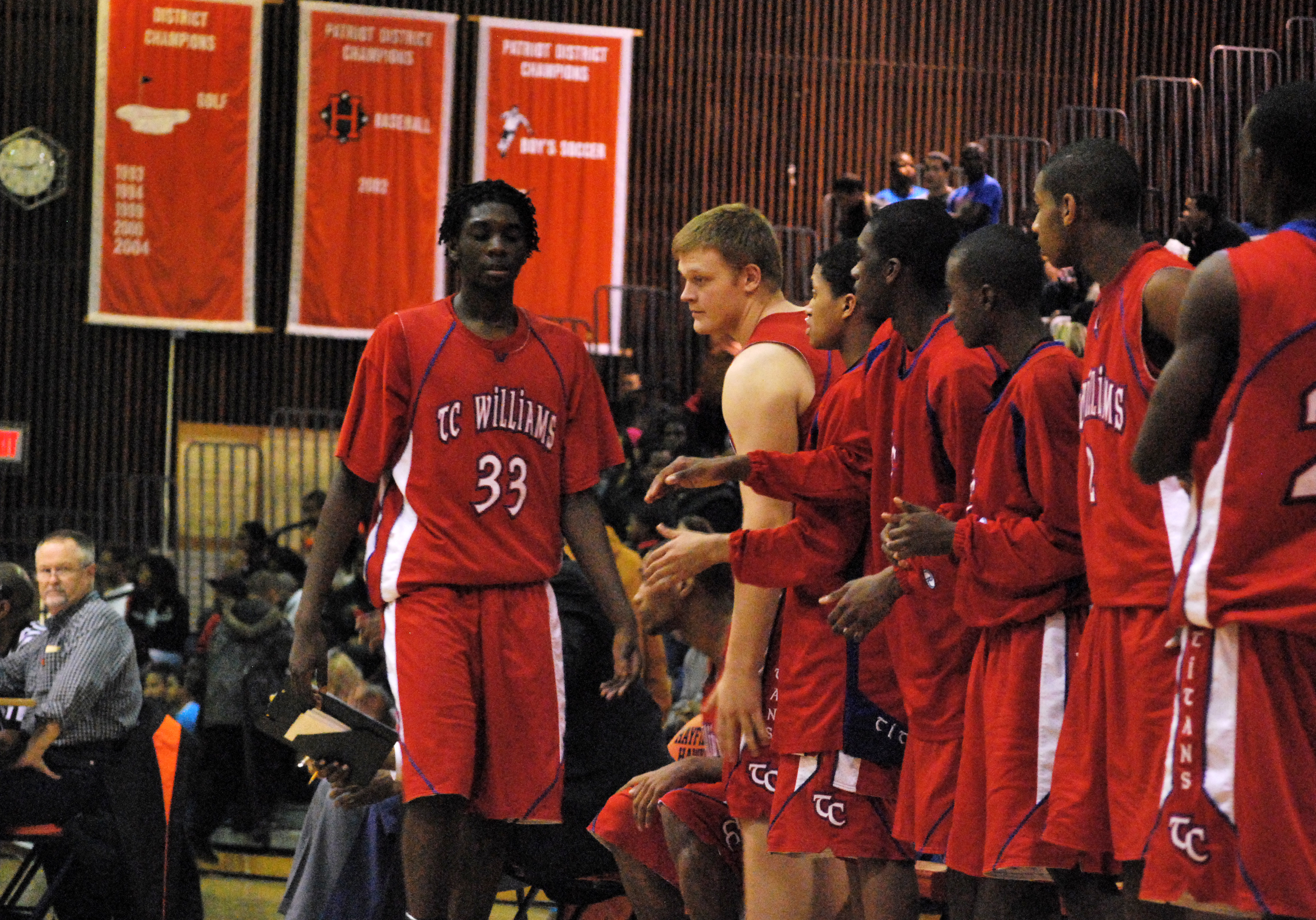 In a stunning about-face on Monday, the T.C. Williams boys basketball team went from the pinnacle of the Northern Region standings to the very bottom, forfeiting their 12 wins to date after learning that two seniors had been competing ineligibly since the start of the season.

Acting on a tip from Lake Braddock athletic director Mark Martino, who received an anonymous call earlier in the day alleging that Rowland was illegally competing as a fifth-year senior, McKeag checked Rowland’s transcript, where he found the allegation to be true.

T.C. was scheduled to play Lake Braddock Tuesday night, but the game was cancelled due to a snow storm.

McKeag said the anonymous call a “red flag” led him to check the records for all of the seniors on the basketball team, revealing that Porter, too, was a fifth-year athlete.

Both students transferred to T.C. mid-way through their high school careers, school sources said, with Rowland arriving from Alexandria’s Bishop Ireton in 2008 and Porter from a North Carolina school a year earlier.

“When a student transfers into the school, normally what takes place is communication between the guidance office where they register and the athletic office where they’re going to play interscholastic sports,” McKeag said Tuesday. “In both of these cases, apparently that did not happen.”

After two years at Surrattsville (Md.), Rowland transferred to Ireton where he was “reclassified” and repeated the 10th grade. Porter repeated his freshman year before coming to T.C. in 2007, McKeag said.

“It’s not unusual that kids slip through gaps in the system,” McKeag said. “It does happen, it happens throughout the state, but at the same time we are responsible for it. In these two cases our process here failed and we’re going to take whatever steps we have to in order to close those gaps that allowed this to occur and make sure it doesn’t happen in the future.”

In a letter to the school community Tuesday, Alexandria Superintendent Morton Sherman said, “T.C. principal William Clendaniel has been directed to conduct a thorough investigation of all personnel and processes involved in the handling of the students’ transcripts when they entered T.C. in 2007 and 2008.”

The results of the investigation are due Friday and the athletic department is reviewing records for all student-athletes to confirm full compliance, according to the letter.

“These kids fell through a hell of a crack,” said Julian King, the Titans second-year head coach, adding that the student-athletes were “floored” when the found out about their ineligibility.

King said that he had not known of the improprieties before Monday and informed his team of the situation at the beginning of practice that evening.

“Plus, to do that to these kids, Billy and Darrius, to build them up and all of a sudden have it taken away from them is tough, because they honestly didn’t know … Had I known, had anyone mentioned it to me, I would’ve investigated it myself.”

The news came as a surprise to the rest of the team as well.

“That was a total shock to us,” said junior forward Jay Whitmire. “They’re definitely two key factors to our team and it just kind of sucks that they can’t play with us anymore.”

The forfeits knock the Titans back from 12-3 on the season to 0-15 and last place in the Patriot District, where, until now, they had reigned supreme with an 80-game winning streak spanning five seasons.

Because of the ineligible players, the streak ended with the start of this year at 71 straight victories.

A similar situation occurred with the T.C. football team in 2000, when the school learned that a player was in his fifth year of high school, voiding two wins that season.

King was not sure if anything was afoot when his leading scorer made the move from Ireton to T.C. or if the communication that occurred along the way was as straightforward as it could have been.

“With Billy leaving B.I., I’m pretty sure they may have been upset, so do you think someone’s going to divulge that information [regarding his eligibility] there? Probably not,” King said.

Rowland’s transfer occurred during the summer of 2008, at a time when the school was between former athletic director Kerry Donley, the current vice mayor, and McKeag, who said he took full responsibility for the oversight.

“When he came out of Ireton we assumed he was an 11th grader but even though he was in 11th grade he was a fourth-year high school player,” McKeag said. “I was not here at the time and I don’t know what took place during the registering process, but we never received that information.”

As the regular season approaches its end, the Titans can hope for a 5-15 record at best before the Patriot District tournament, held on T.C.’s home court February 16.