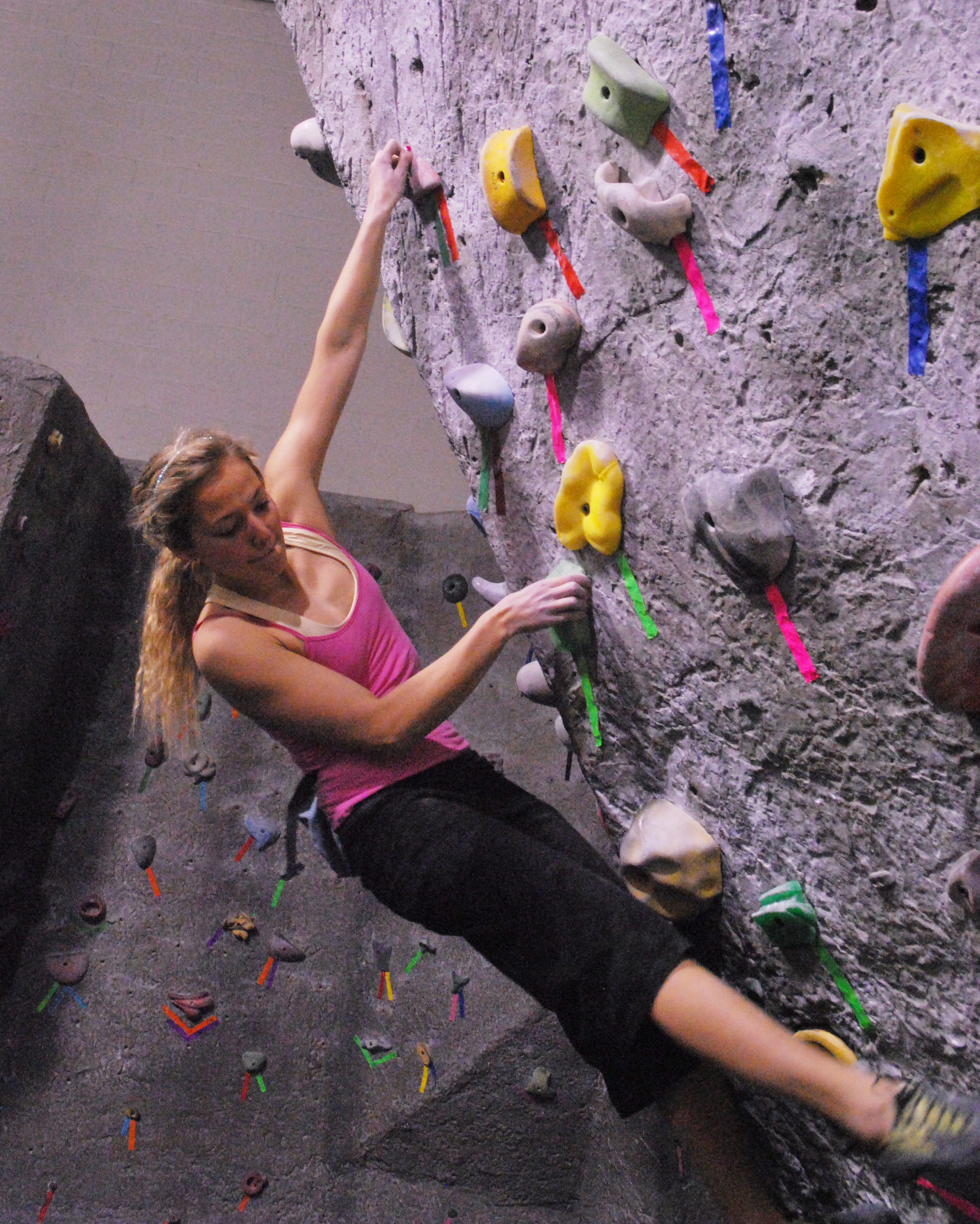 For once, Sasha DiGiulian has some home turf to defend. A home-field advantage.

She just doesn’t know what that advantage is yet.

As she trains for the American Bouldering Series National Championships, a weekend-long event beginning Friday, the 17-year-old city resident has to avert her eyes from preparations taking place on the other side of Alexandria’s Sportrock climbing center. There, course engineers are re-tooling the surfaces for this weekend’s competition with never-before-seen holds, problems and even a few new walls that were trucked in just for the event.

“It’s nice, for once, to be hosting and not staying in a hotel,” Digiulian said Monday night while training at Sportrock. “If it was on one of these walls, one of the older walls, I’d totally have an advantage but I don’t really want that.

“I’m psyched. I haven’t gotten to enjoy the new expansion very much so, yeah, it’s kind of like I have a home-field advantage or whatever but I haven’t really climbed in there aside from the first three days.”

As much as she would like to sneak a peak at the new course, she’s of the mind that even a quick, accidental glance could put her at a disadvantage.

“I know that I’d have a guilty conscience and probably screw up the comp if I did. It’s karma,” DiGiulian said.

Yet, despite an ankle injury and the bad memories she sustained while training last October after falling from the facility’s most daunting bouldering wall, DiGiulian is in top form. Last month, she brought home the gold from the Sport Climbing Series National Championship in Salt Lake City.

Though sport climbing is noticeably different than the discipline in play this weekend bouldering walls are far shorter, 10 to 15 feet high, and do not require ropes like sport climbing DiGiulian’s recent results place her in the upper echelon for the ABS finals.

“She’s very close to her peak,” said Claudiu Vidulescu, head coach of the U.S. national team and one of DiGiulian’s mentors. “She’s never been as strong as she is right now and it’s mostly because she’s put time into it, but she’s also more mature and does things more efficient.”
Among the favorites in the women’s field are past champions Alex Johnson and Alex Puccio, according to Vidulescu. The headliners for the men’s event include former winners Paul Robinson and Daniel Woods, as well as Magnus Midtboe, the 21-year-old Norwegian currently ranked No. 11 in the world.

Midtboe, whose strong suit is bouldering, took the top honors in the men’s division in Salt Lake City last month.

More than 100 other men and women are vying for one of the 15 spots in the finals on Saturday. The top finishers that night will go on to represent the U.S. during this year’s World Cup slate.
Organizers expect more than 1,000 spectators to be on hand for the nightcap, which Sportrock owner Lilian Chao-Quinlan likened to “the Olympics of climbing.”

According to Chao-Quinlan, the addition of Sportrock’s Bay 2 last year, which pushed the facility’s size to about 16,000 square feet prompted USA Climbing’s invitation to host the competition.

To provide a varying array of climbing routes, a team of engineers will reset the walls at least three times before the make-shift surfaces are disassembled and shipped west once things wrap up Sunday.

“The problems have to get progressively harder [and] it has to be entertaining so people who know nothing about climbing” can enjoy the experience, said Sportrock route setter Jeremy Hardin. “We’ve been working on this for a while.”

Even with the high stakes, nine or 10 of the elite climbers have opted to stay under the same roof  at DiGiulian’s home in Old Town. The host is confident there won’t be any hard feelings at the breakfast table.

“We’re good friends so it’s not too tense it’s fun,” she said. “I’m used to it where the top competitors are used to being friends, like any athletes should do, I think.”

What’s yet to be seen is just how fun the course will be for the climbers. The new walls have been added, but the centerpiece will be The Prow. The facility’s premier bouldering surface, it looks more akin to a boat hull busting through the cinder-block wall than an ordinary facade.

It’s also where DiGiulian injured her ankle, dropping at the edge of the pads underneath and severely rolling her ankle to the discomforting sound of ligaments going “pop-pop-pop,” she said.

Hopeful to catch a boost from the hometown crowd, DiGiulian is excited that, for once, going to a competition doesn’t require any checked baggage.

“So many people are finally going to see what a big comp is like. My friends who don’t compete but just hear about the competitions going on around the U.S. and Europe, they’ll finally get to see it firsthand.”