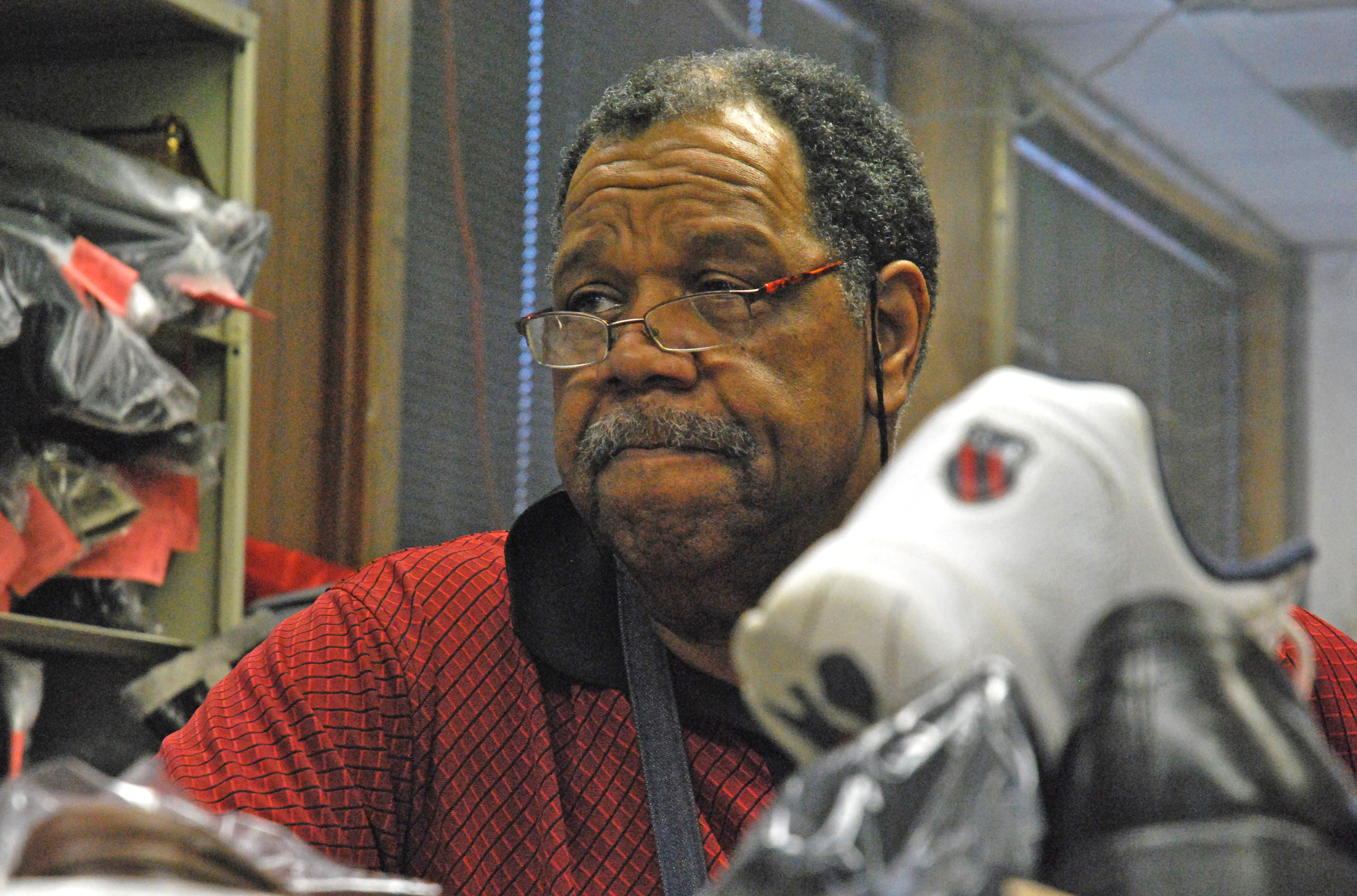 After 57 years of satisfied customers “the shoe shine boy from Charlotte” is still going strong. For the past 22 of those years Joe Johnson has owned and operated Joe’s Bradlee Shoe Repair at 3640 King St., on the Braddock Road side of the Bradlee Shopping Center.

“I was a street kid. Doing all kinds of work but always carrying a shoe shine box. You could always make some money by shining shoes on the street,” Joe, now 72, said as he sat behind the counter of his shop that has become an institution to countless residents of Northern Virginia and as far away as Chicago.

“Eventually, I got a job shining shoes in a shoe repair shop. That’s how I learned the business,” he said. “Since I was originally from Charlotte, they called me “the shoe shine boy from Charlotte” instead of my actual name. I was only about 15 then.”

But Johnson wasn’t just from Charlotte. He had lived many places before his family arrived in Washington.

“My father was a traveling minister establishing churches throughout the South which meant we traveled a lot. He eventually progressed to establishing a large church in Washington and that’s where we finally settled down,” Johnson said.

As one of eight children seven boys and one girl Joe was “sort of in the middle. I never got anything new,” he said. Three of those brothers and his sister are still alive.

Joe and his late wife Yvonne carried on that tradition of eight children but in a more balanced equation four boys and four girls.

His daughter Jo Jo works with him managing the front of the shop as did his wife until her death six years ago.

“She knew everyone’s name. People really loved her. She was a great partner. They still talk about her,” he said. His brother Jim was also part of the operation until six years ago when he had to retire due to health reasons. Joe carries on.

“I feel very blessed to be functioning as well as I am,” he said. “My daughter is amazed that I know exactly where everything is at all times. But that’s what helps to keep your mind sharp.”

Joe has actually been repairing shoes at the Bradlee Shopping Center for 55 years. He came to work there originally as the shoe repair person for Blue Ribbon Cleaners a chain of cleaning establishments in Virginia, Maryland and the District of Columbia.

“Many dry cleaners used to also offer shoe repair services. Originally I moved around through their various shops setting up the shoe repair business. That’s how I came here to the Bradlee Center,” Johnson explained.

The cleaning business was eventually sold, although it still remains in the Bradlee Center, and Joe found himself on the way out. “But many of the other merchants here didn’t want to lose me so they persuaded the shopping center owners, WRIT, to find some space for me to open my own shop,” Johnson said.

That was 1988, the year that Joe’s Bradlee Shoe Repair came into its own. “This space was actually a warehouse at the time. I worked in the back until it was refurbished,” he said.

That same year was also a momentous year for his son Bryant, a graduate of Ohio State University who was selected to be a member of the U.S. Handball Team to compete in the 1988 Olympics in Seoul.

“A parent of each of the team members was offered a free trip, sponsored by Seagrams, to the games. I had just opened this shop and was very worried about leaving for two weeks. But my wife and daughter said it was a chance of a lifetime and they could handle the shop,” he said.

Today Bryant lives in Tampa  while Joe’s other children Vincent, Andre, Anthony, Jo Jo, Veneta, Regina and Renee all reside in Virginia. Veneta and Andre have followed in their grandfather’s footsteps as ministers.

It all makes for regular interaction with his nine grandchildren and five great-grandchildren.

“One of my great grandchildren just came in last week to visit me when she was home from Virginia Commonwealth Univertisy,” he said.

It turned out the Bradlee Center merchants who prevailed on WRIT to find space for Joe were absolutely on point as to him being a vital member of their community. Some of Joe’s customers have been with him for more than 40 years first at the cleaners and then in his own space.

“One of my longest customers, who recently died, never bought new shoes. He just kept having them repaired,” Joe said.

“I have third generation customers. One girl, who used to work for me, once asked me if I knew someone who could be her date for a prom. I recommended someone. They got married. Now her daughter comes here for shoe repair,” he said.

“One of my long-time customers had a son who was shipping out to Iraq a couple of
years ago but he didn’t want to leave without coming in to say goodbye to me,” Johnson said. A picture of that soldier as a young boy with his father is one of several gracing the walls of Joe’s shop.

“I do a lot of work for the police. One day they had an officer visiting from Chicago come in to get his shoes reconditioned for dress use,” he explained.

“When he took them back to Chicago, others were so impressed they now send me shoes from there to be reconditioned with a brilliant black patent leather finish for ceremonial use,” he said. Two such pairs were on the shelf waiting to be shipped back to the Windy City.

“I’ve been a customer of Joe’s since he was with the cleaners. He not only does excellent work but he’s also such a good person to deal with. Our whole family uses his shop,” said Melvin Miller, chair of the Alexandria Redevelopment and Housing Authority.

“I have been taking shoes to Joe for at least 20 years and I’ve always been so pleased. He does quality work for a very good price. He still has that charm of a smaller, simpler Alexandria,” Lawson said.

“It’s a small shop that has a family feel about it. He has always been able to work miracles. We bring him the impossible and he does it every time. Plus, Joe is a really good guy,” Pepper emphasized.

As with the customer who Joe said never bought a new pair of shoes, one of the reasons for that might be that “many shoes today are not made to be repaired,” he said. “There’s too much plastic in them.”

For Joe, quality is everything. As he told a customer who came in during our interview, “I won’t fix it until I’m satisfied that I have the right materials for the job.” That “right stuff” is not only about his workmanship, it is personified by Joe himself.