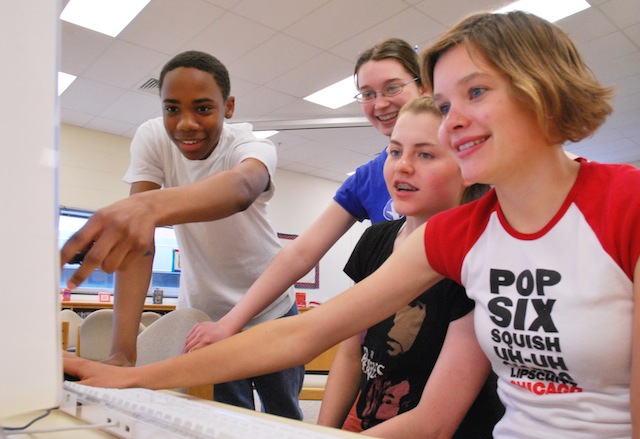 Anyone itching for the latest news about life inside the halls of Francis C. Hammond Middle School now has the readily bookmark-able source they always wanted.

The Colton Journal, an online newspaper produced by and for Hammond students, went live in February as the voice of Hammond 2, one of the three sub-schools on campus. Staffed by a band of about 15 dedicated contributors, the fledgling student publication barely two months old has already adapted to its market in a way that has baffled many decades-old news outlets.

The whole idea before was that it would be monthly, like a newspaper, except wed just slap it online, said Sydney Schaedel, an eight-grade senior staff writer for the Journal. The website now operates like a blog that the students update on the fly.

The student paper offers content ranging from advice and stuff to features, creative prose and poetry, and movie reviews pretty much everything, according to senior members of the editorial team.

Although the students have yet to receive any formal journalistic training their school lacked the journalism elective course that other middle schools in the city have offered it has not held them back.

For eighth-grader Evan Martin, the papers man-on-the-street, the recipe is pretty simple.

For me, I walk around and see whats going on in school two and then I write it down, correct any errors and put it on the website, Martin said.

The Journals editors-in-chief, Stephanie Slaven and Emily Schulman, integral in the publications founding, said they could not take full credit for the venture.

Egged on by a now-freshman at T.C. Williams who was unable to get a newspaper off the ground in his time at Hammond, the two have benefited from schedule changes that allow for a special elective course. The opportunity presented by the girls PACE class on graphic web design was just what they needed to turn the Journal into reality.

The girls approached me and said they wanted to do a newspaper, said Elaine Brand, their faculty advisor. Whats really cool is it was completely student-generated. It was their brainchild and they just made it happen.

As for the name of their publication, the students stuck with school tradition. Attending the middle of the three schools that administrators divided the former 1,200-student Francis C. Hammond Middle School, Slaven found inspiration in the middle initial, which stands for Colton.

I thought it would be appropriate, Slaven said. Its a unique name.

Most of the time, the students coverage is limited to FCH 2, but if something spans obviously between the three schools we will talk about that, Schaedel said.

The finished product (www.acpsk12.org/fch2/) is also representative of the Hammond students own media habits.

Spending most of their lives with the internet at their fingertips, the editors and senior writers said they find most of their news online. It seems that smudged ink from print newspapers isnt as appealing as it once was.

As the editors see it, the online venture is far more cost-effective and greener. Its also more cutting-edge.

Online journalism is going to become more and more prevalent in the future, Schaedel said, citing news from the day before that a Pulitzer Prize is going to an online news organization for the first time.

With an eye on the future and high school the members of The Colton Journal hope that their younger peers will pick up where they leave off in June. They said a few seventh-graders come to mind, but theyre not handing over the reins just yet.

Were all heading to ninth grade, so we need someone to take our place, Martin said.

It was completely student-generated. It was their brainchild and they just made it happen.