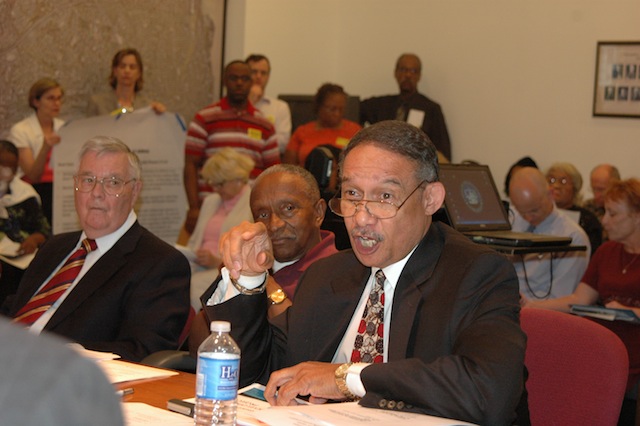 A group of public housing residents and their supporters crashed a work session between the City Council and the Alexandria Redevelopment and Housing Authority last Thursday, demanding fair treatment when being relocated for development projects.

Some residents say they have been treated as objects, receiving as little as three days notice of their new address and moving date before being forced out of the James Bland neighborhood in the first phase of dislodgments.

Roy Priest, director of ARHA, said Thursday that residents were not being specific enough with their claims, and that the Office of Housing and Urban Development, which oversees ARHA, has received few complaints from their tenants.

Priest also told Council members, who do not control ARHA, that his staff was making strides in communicating better to its tenants by dropping off How are we doing? surveys, but tenants deny ever seeing them, and say they only have two liaisons for hundreds of dilapidated units.

What he has been telling [Council] is a bold face lie, said Hattie Thompson, who moved out of the Bland neighborhood in the first phase.
Other residents echoed her sentiments.

All we want is respect and communication, Thompson said.
Priest vowed that future move-out phases would go smoother.