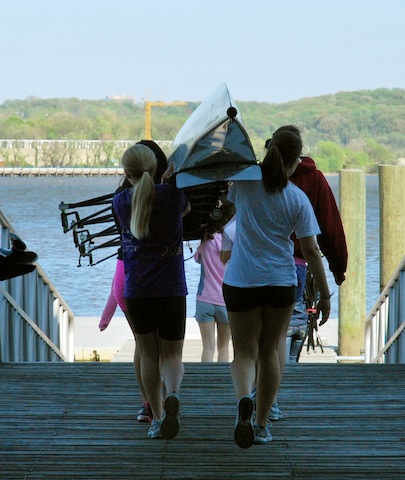 Its another dazzling spring Friday on the Potomac and the day before the first big race of the year. Busy cleaning and prepping their boats for Saturdays regatta in Delaware, dozens of T.C. Williams rowers buzz about the schools riverside boathouse.

Eager to see just how far theyve come after months of off-season conditioning, the boys and girls of the Titan crew program including those who have to wield the oars the next day go about their conditioning with smiles on their faces.

As anyone who has spent time on a rowing machine can attest, there isnt much to grin about when youre in the moment. Its an exercise that is grueling on the good days and downright hellish on the not-so-good days. Bared teeth are more likely to be grimaces than smiles.

So why, after all the running, crunches and hours on the erg, are they smiling?

Its a mental illness, said Jon Schildknecht, head coach of the girls program.

Each week in the spring, the Titans log hour after hour at the Dee Campbell Rowing Center, the schools million-dollar facility on the waterfront in north Old Town. On Saturdays, they get to race for their satisfaction.

You have to be somewhat crazy to do this sport, said Madison Weitekamp, a member of the boys freshman eight boat. We work so hard for what seems like so little five minutes or 1,500 meters. You do have to be a little insane.

Schildknecht, a 1992 T.C. alum who rowed out of the same facility that his athletes use today, knows the drill. He picked up the sport as a sophomore and, having gone on to row at Virginia Tech, has never looked back.

One of my coaches in 10th grade said, If youre lucky this will become your life, Schildknecht said. In 10th grade I didnt understand that, I didnt even give any thought to that, but Ive been doing crew continuously since 1990 I havent had a spring break since 1989.

Hes not the only one. The T.C. crew coaching staff is littered with former Titans who remain fixated on the sport and find themselves back where it all started.

Theres no part-time, theres no kind-of-hard, Schildknecht said. You either become part of the crew culture or you dont.

Yet for a pastime that is centuries old, far out-dating other spring sports like baseball, softball, tennis and lacrosse but still out of the mainstream, that culture remains an oddity to most.

And whether its used dismissively, grudgingly or lovingly inside or outside of the boathouse there is one word that continues to pop up in descriptions of the T.C. crew teams: Cult.

Some of the Titan rowers take umbrage with the label. Others seem to relish it. Most, though, realize why their sport can be mistaken for something else.

Since our friends are in crew and we spend so much time doing it, [others] think were a cult because we only hang out together and always talk about crew, said junior Christina Wohler, part of the girls varsity eight boat. In May we basically live together.

I see these people more than I see my own family, added her boat mate, junior Nora Willkomm.

From March to June, the eight- and four-person crews, along with their coxswains, maintain a domineering schedule.

Monday through Friday, the Titans show up to the boathouse for practice, gobbling up their after-school hours. Crews gather for boat parties no outsiders allowed every Friday before a regatta. Its a sacred ritual of team building, hydrating and carbo-loading.

Then, nearly every weekend until the end of school, T.C. crew barnstorms up and down the East Coast to take on the best competition they can find.
The bonds that result are borne out of necessity, practicality and a common passion.

Its very atypical for somebody to stay on the crew team when their friends dont do it just because you dont get to see anybody, said Kim Poff, the girls varsity eight coxswain. You wouldnt quit crew because then all your friends are still doing crew.

In trying to understand why nearly 170 students actively choose to take on a sport thats as demanding and life-changing as they come, the insanity plea and intrinsic camaraderie only go so far.

Some are drawn to what Schildknecht calls the elegance of the scull slicing through the water, the oars operating in perfect harmony. Some savor the fitness gained from rowing. Others still are drawn to it as the ultimate team sport, one where each athlete is on equal footing.

You cant be a star on a boat. There cant be a star, Poff said. In the water, theres never somebody who says, I won that race for you.

All of that is well and good, but does not tell the whole picture for the T.C. crew program. Theres also the legacy of success.

In a school captivated by its high-profile sports like football and basketball, each with their own winning legacies, the championship banners for the Titan crew teams are far and away the most crowded with dates marking past glory.

Since its founding in 1974, the girls team has won numerous state championships, national championships and more than 30 gold medals at the Stotesbury Regatta in Philadelphia, the nations premier high school competition.

The Titans continual dominance led Stotesbury to name three of its trophies after T.C. coaches.

At T.C. youre supposed to win state championships in crew, said junior Emily Leidolf of the girls varsity eight crew. Because our program, theres so much tradition behind it and theres such a legacy, you feel a sense of pride every time youre in the boat.

Sometimes though win or lose, cult or no cult crew is about simplicity.

Its appealing that not a lot of people know [about the sport], said boys freshman eight rower Quadra Wilcox. It doesnt have to be so complex, like, This is the revealing, the uncovering of the mentality of crew.

You just come down, put in as much as you can and youll get it.