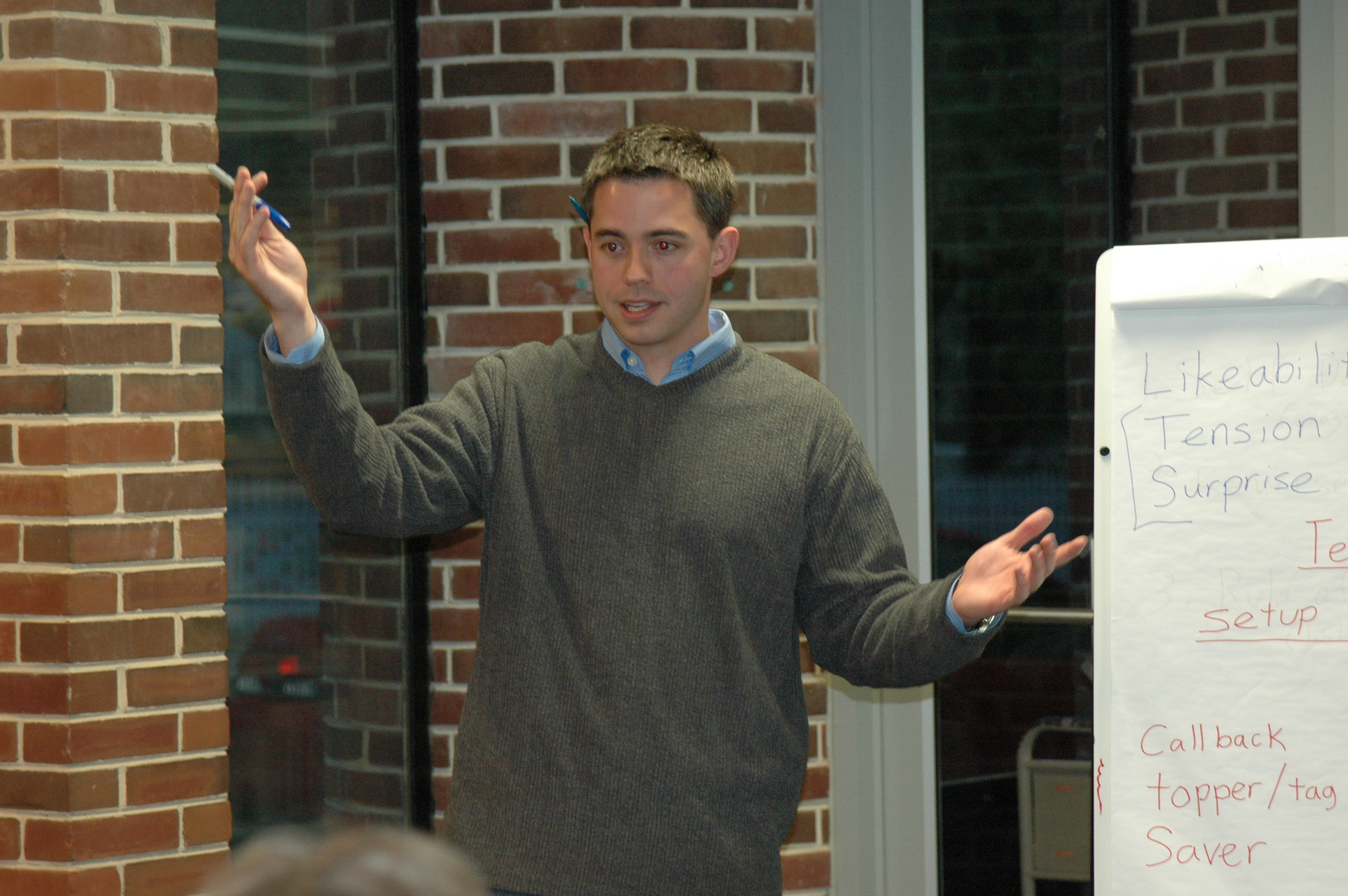 E.B. White once said, Humor can be dissected as a frog can, but the thing dies in the process and the innards are discouraging to any but the pure scientific mind.

Comedian Graham Currin  did exactly that for a small group of residents gathered at James M. Duncan Library for a clinic on how to be funny or, more precisely, how to make sure the audience doesnt walk out on you should you choose to pursue the agonizingly introspective career of standup comedy.
Not that its a career for Currin.

People would ask me if Im a professional comic and thats a very nebulous area, Currin said. I think the term is working comics those who live solely off their performances, which I find to be a tough and meager existence. See, the problem is, I like health care, I like food.

Fresh off a gig in Lancaster, Pa. Amish country Currin has not made his breakthrough, at least not yet.

Graham has written for The Late Show with David Letterman, The Onion, and The Office and one day hopes they will write back, his website states self-depreciatingly. But I have been relatively successful in a short amount of time and Ive learned enough lessons that I can pass on to folks, he said.

Currins comedy clinic is part of All Alexandria Reads, a free 19-day-long program of events facilitated by the citys network of libraries. Its designed to create a dialogue among residents through reading.

Each event, ranging from jazz performances to comedy clinics to tea tastings, is threaded together by The Geography of Bliss: One Grumps Search for the Happiest Places in the World, a book by Eric Weiner that the Alexandria libraries invite residents to read and discuss in the context of the book itself but also at performances and workshops like Currins.

They asked me to do a standup show at a library and I thought that would be immensely awkward, he said. But I can teach this class instead.

Currins crew stepped outside their comfort zone and stood in front of their amateur counterparts awkwardly to get a feel for being on stage before the teacher himself broke down the psychology of what to do once you are there.

Expectations are low, he said. The audience just doesnt want you to make them feel grossly uncomfortable.

Essentially, comics lie to their audiences. Currin sees each joke as a net thats thrown over his audience a trap that gets people to laugh, often because there is a little bit of truth in each joke.

But more often, its a matter of being conscious of yourself and your audience. The most important thing to being funny at least in front of a room full of strangers is likeability, Currin says. It gives you comedic capital to work with. You earn it by being self-deprecating, giving you free range to go out on a limb with a joke or two.

You see George Carlin doing a rape joke, and get people to laugh, and thats because he builds up a tremendous amount of likeability so he can get away with it, said Currin, who tries to keep his material clean.

The audience learned that tension is actually your friend on stage because it doesnt really matter how you cut it, as long as you do.

If your audience feels uncomfortable, theyll take anything, he said. Theyre looking for a reason to laugh and all you have to is give it to them.