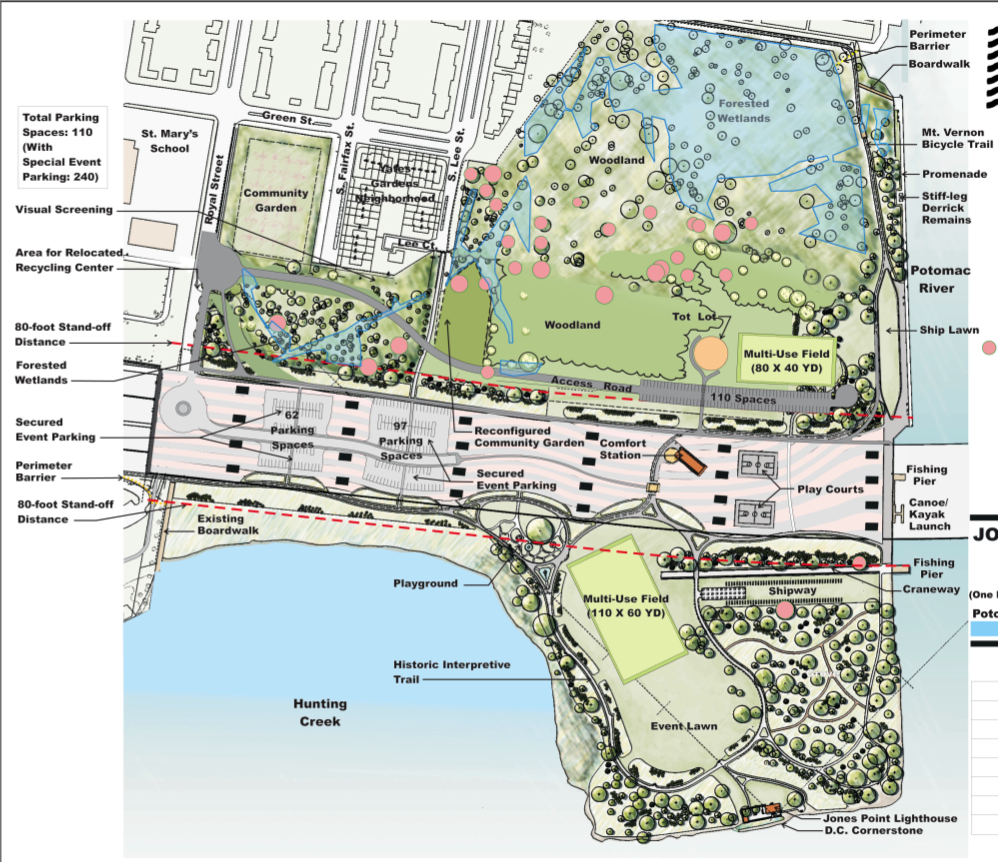 If ever there was an example of citywide participation in the governmental process impacting Alexandria residents, it has been and continues to be the future of Jones Point Park.

Originally, it was a debate and series of confrontations about design. Now, its about how long the park will be closed for reconstruction.

The National Park Service, which owns the land as a National Park site, and the Virginia Department of Transportation, under whose aegis the construction of the new park will take place, want the park closed completely for the 18 to 24 month estimated construction time.

That desire has raised the hackles of a group of citizens who view it as unnecessary and depriving them of access to their park.

They want portions of the park to remain open during construction. But that raises questions of time, money and safety. To require the selected contractor to do so would up the final tally by an estimated $2 million over the projected $19 million cost and elongate the project by a possible two years, according to VDOT and Dottie Marshall, superintendent of the George Washington Memorial Parkway.

But, the 18-month construction period is a generous time frame, according to Marshall. If no unusual weather events occur, like last winters blizzards, and no unforeseen problems arise, it could be finished in a much shorter time, Marshall predicted.

Spearheading the effort to keep the park open during construction are Eric Stark, a resident of South Royal Street in Old Town, and Hannah Williams, PTA president at Lyles-Crouch Elementary School. They recently circulated a petition to have the park remain accessible.

We took the petition to the playground and got 200 signatures within 20 minutes. After all, this is our neighborhood park, Williams said.

On June 4 Stark sent a letter to Mayor Bill Euille and City Council stating, We are strongly opposed to the proposed closure of JPP and we urge you to use your influence to make sure that any construction plan provides for maximum citizen access to the park during the construction period.

He also made reference to the 2000 Record of Decision and the 2007 environmental assessment, both of which stated, access to the southern portion of Jones Point Park would remain open at all times. However, as Marshall pointed out that, referred to the bridge construction not to park reconstruction.

As John Undeland, spokesperson for the Woodrow Wilson Bridge Project, noted, During the bridge construction only 30 percent of Jones Point Park was impacted. This literally impacts the entire 65 acre area.

With the disbanding of the WWB Neighborhood Task Force last year, Euille turned park matters over to James Spengler, director of Alexandria Department of Recreation, Parks and Cultural Activities, and the City Park and Recreation Commission. Spengler has proposed a rational fence replacement plan … to protect construction sites and maintain access to JPP without changing the structural phasing of the renovation, according to Starks letter.

However, as Marshall recently emphasized, phasing construction was never considered in reconstructing the park after the opening of the new dual-span bridge. Therefore, its not a matter of phasing.

As for the overall design plan, it remains nearly identical to the plan adopted June 27, 2007 during a public meeting at Lee Center, according to Kate Barrett, Landscape Architect, NPS, who will oversee and direct the reconstruction.

The only structural change is that we have decided not to build a guard house under the bridge for special event parking, she said.

The only new element under consideration is a potential second entrance off South Fairfax Street, according to Marshall. Although this was never in the original concept, it has become a possibility with the planned removal of a large bamboo cluster at that spot as part of the NPSs efforts to remove invasive plants.

Even with the bamboo gone we may not want to add an additional park entrance. We will definitely discuss it with the residents of the area, Marshall said.

That and the issue will be the prime topics of discussion at a public session scheduled for July 7 at Lee Center beginning at 6:30 p.m. This was decided at a meeting held June 9 in the office of Rep. Jim Moran (D-8), co-hosted by Moran and Euille, that included representatives of NPS, VDOT and FHWA.

The Park Service is looking at different options to provide public access during construction while not increasing costs and delaying the project. The Mayor and I plan to hold this public meeting to get local input and give VDOT, NPS and FHWA a chance to more fully explain whats possible, Moran said.