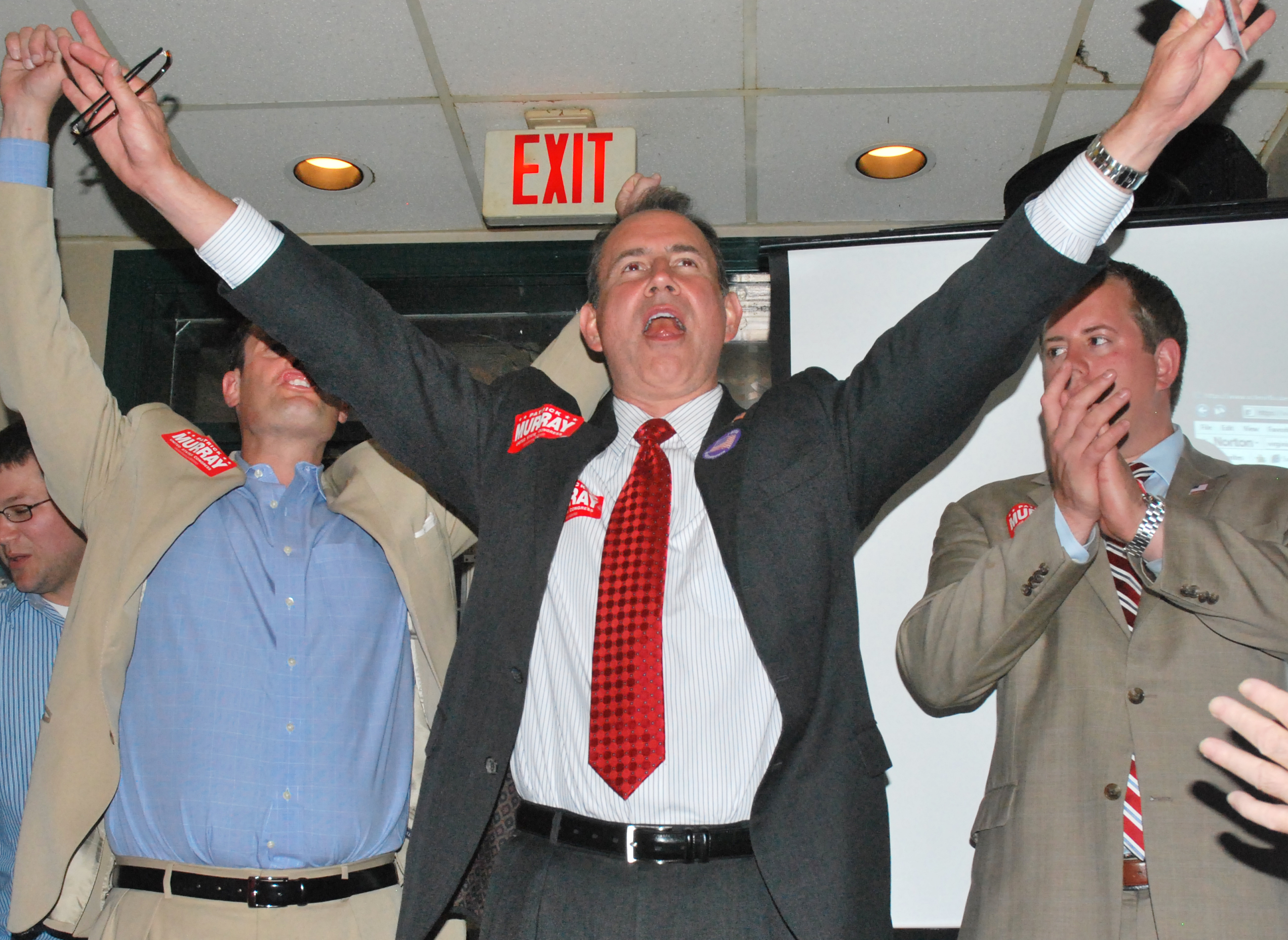 Alexandrian Patrick Murray beat out fellow Republican Matthew Berry in a tight primary race that pulled voters to the polls in larger than expected numbers on Tuesday, earning him the nomination and the underdog distinction to challenge Rep. Jim Moran (D), a seemingly immovable politico, in November.

Despite predictions of a voter turnout mirroring the miniscule 2008 Republican primary returns, about 8,000 more voters still just 3 percent of the electorate pulled the lever to elect Murray than they did then to nominate Mark Ellmore two years ago. But this race was much closer, and remained so until Berry, of Arlington, left a concession message on Murrays phone while the congressional hopeful partied with GOP members at Pat Troys Irish Pub. He won by just 521 votes, a margin of 3.8 percent.

It was a little nerve-racking, said Murray, 51, a day after his victory. [Berry] is a very intelligent young man and thats part of the reason why the turnout was so high. I think that bodes well for the party moving forward.

Berry took the precincts in Arlington and Murrays home district of Alexandria but Murray won Falls Church and Fairfax, the largest of the voting districts.

Indeed, the goal of the Republicans from Alexandria to Las Vegas is to upend Democrats in an election year that favors challengers.

Murray entered into an intense homestretch strategy a week before Election Day, commissioning the minds behind Sen. John McCains Straight Talk Express bus to create a customized version of the motorized billboard a Time to Lead bus tour that took him throughout Alexandria, Fairfax, Arlington and Falls Church on a sort-of Operation Handshake.

The most surprising thing was that people just didnt know there was an election, said Murray, an Iraq War veteran with diplomatic experience. Still, I must have shaken about 1,000 hands.

Murray challenges a 10-term, 20-year incumbent in Moran, whose Democratic party has fortified the 8th District since he took over in 1991.

Its really hard to be an incumbent because youve got someone [in Moran] whos entrenched, who has a lot of money and whos willing to use that money to stay in power, said Alexandria Republican City Committee Chair Brenda Hawkins. Thats always hard to deal with.

The Republican Partys hopes lie in Murrays ability to pull from the reservoir of the Democratic and Independent electorate while registering new GOP voters. To do that, Murray said he will focus on issues that he considers non-partisan, like high federal spending levels.

Alexandria Democrats are not scoffing at Murrays candidacy despite the 8th Districts deep blue tendencies.

Jim Moran and our committee arent taking anything for granted and of course were aware of the national anti-incumbent sentiment, said Clark Mercer, chair of the Alexandria Democratic Committee. Were full steam ahead and treating this as serious race.

Mercer, perhaps obviously, likes the chances of an 11th term on the Hill for Moran, a former Alexandria mayor and city councilman. Murray has never run for office and moved to Alexandria about two years ago, though he lived here for eight years at one point.

Politics is local, Mercer said. Murray would have to make the case for why his positions arent in line with the districts, and why he has such a short track record.

That short track record is exactly what Murray relies on to win in November.

I would welcome the comments from the other side that Im not a politician and that Im a new face, Murray said. Thats accurate. This is an anti-incumbent year for good reason on both sides of the aisle. Ill be talking about how Im not a politician thats exactly what we need.